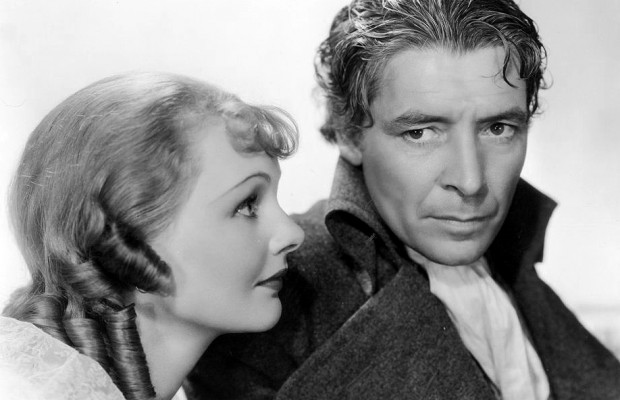 Toronto Film Society presented A Tale of Two Cities (1935) on Sunday, February 1, 1981 in a double bill with Apache as part of the Season 33 Sunday Afternoon Film Buff Series, Programme 6.

It is not surprising that A Tale of Two Cities was produced by David O. Selznick, for Dickens had been one of his favourite authors since he was a youngster.  Selznick, one of the most literate, meticulous, and tasteful Hollywood producers of the 1930’s, had earlier brought such classics as Anna Karenina and David Copperfield to the screen.  With numerous major successes to his credit, he was able to command the vast resources of M.G.M. to make Two Cities the way it deserved to be made–on a sweeping yet rich and intimate scale.

Selznick had great respect for Dickens, and took pains to be faithful  to the plot and atmosphere of the book, making only the necessary compressions of story and updating of dialogue which were necessary.

Jack Conway was one of Metro’s versatile contract directors of the 1930’s.  His films, like those of his friend Howard Hawks, are often concerned with the relationships between comrades, the necessity to keep face and retain one’s masculine integrity.  His direction of Ronald Colman in Two Cities is especially effective, nobody else has captured so accurately Sydney Carton’s melancholy fatalism or the moral necessities which can drive a man to self-destruction.  One of Conway’s most poignant scenes shows Carton waiting in the snow at Christmas time, watching the carollers and churchgoers hurrying past to the warmth of the home which he does not possess.

So perfectly does Ronald Colman fit the role of Carton that it’s hard to imagine any other actor in the part–except perhaps Colman’s friend Leslie Howard.  Coincidentally, Howard had starred in another story of the French Revolution, The Scarlet Pimpernel the year before.

The lives and careers of both actors were remarkably similar.  Both Colman and Howard were superb actors.  Their magnificent voices made the language ring–clear, dignified, perfectly modulated, sincere, with a touch of melancholy.

For Colman, playing Sydney Carton was the realization of a longstanding dream, and was to remain his own favourite of all his performances.  Shrewdly underplaying, scorning his stock matinee-idol Colmlanisms, the great British actor got right into the depths of Carton’s character.  Carton–a dissipated lawyer, disillusioned by life, without pretenses and always himself, without regard for opinions of others–a man whose flaws as well as his virtues make him truly three-dimensional–is brought richly to life by Colman.

There had been some discussion of casting Colman in a dual role as both Charles Darnay and Sydney Carton, since, according to Dickens, they looked almost like twins–however this was vetoed by both Selznick and Colman, to avoid audience confusion in the final scenes.