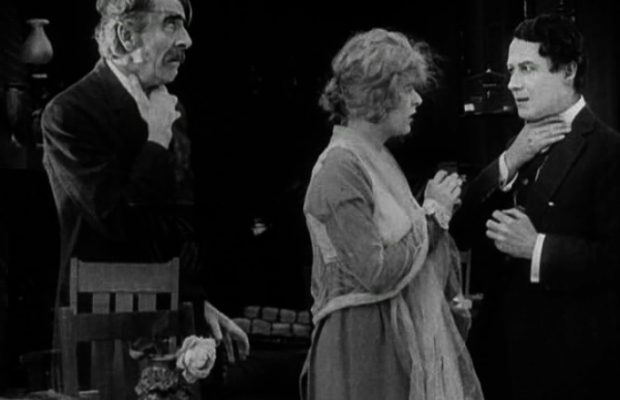 AN EVENING OF D.W. GRIFFITH

Of this programme of early Griffith films, three are distributed by the Museum of Modern Art Film Library of New York and are intended to be shown as a group.  A fourth, The Battle at Elderbush Gulch, obtained from another source, has been added as a further example of the director’s developing techniques at this period.

Of Griffith the M.M.A. says: “An innovator of entirely new methods of visual narration in which close-ups, cross-cutting, a studied tempo of editing and a growing consciousness of social and moral problems, combined to make him the great pioneer and creator of the art of the motion picture.  His The Birth of a Nation and Intolerance remain classic and their influence can be seen not only in subsequent American film production but in the work of Gance in France and of Eisenstein in the USSR.”

Says Seymour Stern in the British Film Institute Index on Griffith: “Film montage or the creative composition of the continuity and relationship of the separate images or shots, begins in the cinema with D.W. Griffith.”

And in an address to the Screen Producer’s Guild, Cecil B. DeMille said: “Among the host of names there is one that towers like a mountain.  His spirit and influence are present in every gathering of motion picture people.  His hand can be seen in every motion picture that is made–David Wark Girffith.  Some used to flatter me by saying Griffith and I were rivals.  Griffith had no rivals.  He was the teacher of us all.  Film historians are saying now–and truly enough–that Griffith did not invent the close-up or cross-cutting or other techniques with which he has been credited.  That does not take away from his glory.  He did something more important than to invent these techniques.  He was the first to realize fully their dramatic value; the first to raise them to the level of a fine art; the first to give the motion picture camera its own unique and fluent language.  Griffith was the first to photograph thought.  We all learned that from his–and we have been using it ever since.”

The Lonedale Operator (1911)  Photographed by G.W. Bitzer.  With Blanche Sweet.  Released by Biograph.  “Fluency of cutting enlivens a last-minute rescue” – M.M.A.  “A significant advance in the development of film montage.  Griffith here made strides in the cinematic or conjunctive method of narration; the tempo of continuity-movement was heightened; action-speed within the shot was increased; very close shots were used both for detail and suspense.  The technique of cross-cutting also was further developed.” – Seymour Stern

The Musketeers of Pig Alley (1912)  With Lillian Gish and Harry Carey.  “A Depiction of the Gangster Evil”.  “Realistic vignettes of crime and slum life.” – Seymour Stern.  “As an exercise in motion picture composition, this little masterpiece richly rewards study; the camera placements and free movement of action are especially notable.” – M.M.A.

The Avenging Conscience (1914)  Adapted by Griffith from Edgar Allan Poe’s stories The Tell-Tale Heart and The Pit and the Pendulum, and his poem Annabe Lee.  Photographed by Bitzer.  Released by Mutual.  With Henry B. Walthall, Blanche Sweet, Spottiswoode Aitken, George Siegmann, Ralph Lewis.  “A Poe mosaic, distinguished for Girffith’s direction and Henry B. Walthall’s superlative characterization; this was the forerunner by almost ten years, of the German psychological film.  Beyond question it was also Griffith’s outstanding artistic achievement prior to The Birth of a Nation.” – S. Stern

One response to “The Avenging Conscience (1914)”