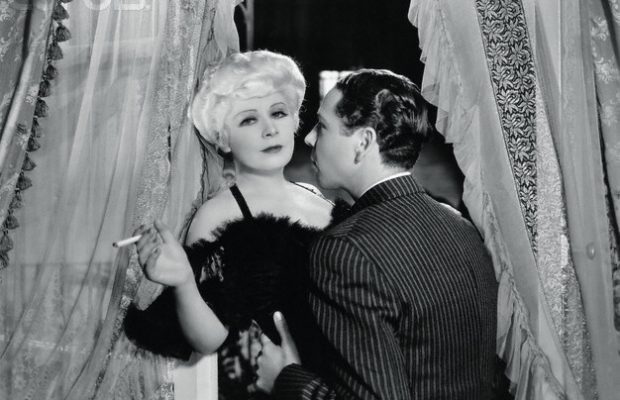 Toronto Film Society presented Belle of the Nineties (1934) on Monday, January 8, 1990 in a double bill with My Gal Sal as part of the Season 42 Monday Evening Film Buffs Series “B”, Programme 5.

Tonight, a salute to two glamour girls of the cinema, both presented at their peak.  Both films are musicals with a Gay Nineties setting and both are very obvious showcases for their leading ladies.  One begins with a big production number and the other ends with one.  The only other thing they have in common is Libby Taylor as the maid, plus lots of entertainment.

The plot of Belle of the Nineties has only secondary importance unlike Mae’s previous films, She Done Him Wrong and I’m No Angel.  It is, above all, a personal vehicle for Mae West, a display of her talent and personality.  The film went through a series of changes, commencing with “That St. Louis Woman” and then “It Ain’t No Sin”.  No matter what it was called, after her previous films it was bound to be a winner.  The public anxiously awaited and Belle easily combined the atmosphere, ribaldry and glamour of the other films.  Compromises had to be made, unfortunately, thanks largely to the Hays Office. 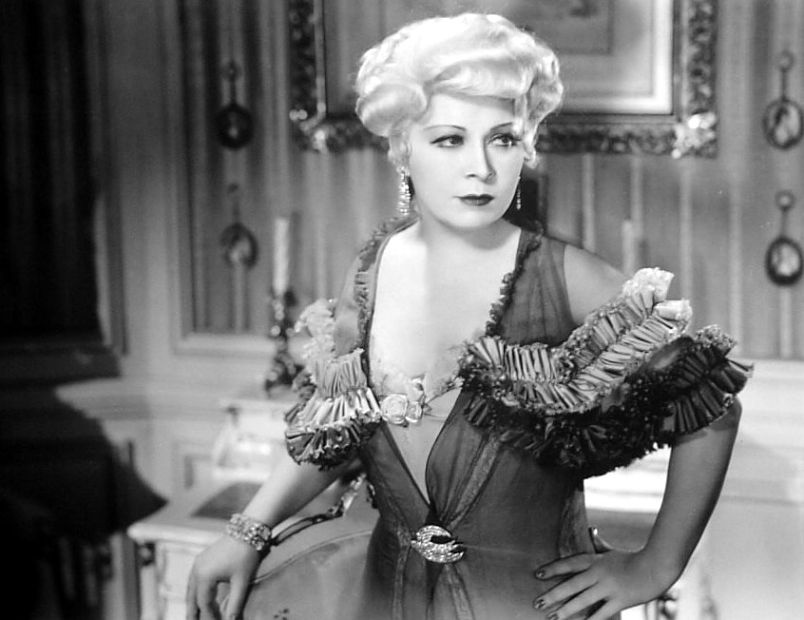 After I’m No Angel, the censors bore down harder and during the filming of Belle, Mae found the Hays official on the set–“enjoying himself”.  In fact, the original script of Belle was totally rejected by the Hays Office and had to be rewritten.  Among their complaints, the Hays Office called it “a yarn which is quite patently a glorification of prostitution and violent crime”, the leading character (Mae) established as “a person with a long and violent criminal record who displays all the habits and practice of a prostitute and aids in the operation of a dishonest gambling house, drugs a prizefighter, robs her employer and deliberately sets fire to his premises and in the end goes scot-free in the company of her illicit lover who is a self-confessed criminal, thief and murderer.”  Whew!!  They sure took themselves seriously in those days.

For Mae, the censor’s cruelest cuts came during the film’s opening scenes.  Mae takes her boxer boyfriend up to her apartment.  “Tiger” is in training but he can’t resist Mae.  Her idea was to get laughs by implying that Tiger not only spent the night but actually went for Mae’s specialized kind of “training” for a period of several days.  “Lap dissolves” were use to show the passage of time and Mae thought it added up to great laughs.  Unfortunately, she reports, “the censor didn’t laugh and he cut.”  A few other amusing innuendoes were also deleted and are, sadly, lost forever.

In her 1959 autobiography, Goodness Had Nothing To Do With It, Mae comments, “Every person who is not a moron or a mental defective of some sort carries a very effective censor and super-critic of his actions in his cerebral cortex, and in his heart.  If that doesn’t work, no amount of censorship from the outside will do anybody any good.”  She also notes that none of this affected her personal life.

Censorship problems aside, Belle is still pretty entertaining and Mae gets off some good lines.  For instance, when the steamboat docks at New Orleans, Mae sashays down the gangplank in arm with a playboy millionaire (John Mack Brown).  The men surge forward eagerly and she is asked “Are you in town for good?”  Mae replies, “I expect to be here, but not for good.”  She also informs the boys in the bar, “It’s better to be looked over than overlooked.”

The film’s plot–the usual underworld melodrama–exists mainly to provide Mae with a series of elaborate production numbers.  The opening number is the most spectacular in all her films.  While Gene Austin croons “My American Beauty”, garbed in designer Travis Banton’s most exotic confections, Mae appears in a variety of fantastic guises: a gigantic rose, a spider, a bat and a butterfly (with fanciful wings like a Japanese kits).  The climax of this extravaganza is Mae’s incarnation as the Statue of Liberty.  Torch held proudly aloft, Mae brings the shouting music hall audience to its feet.  Upon viewing this amazing sight, Vanity Fair‘s critic, George Jean Nathan, dubbed her “the Statue of Libido”.

By modern standards, most of Mae’s dialogue is pretty mild and innocuous.  Belle would probably have been a lot funnier more of the time if the Hays Office hadn’t “protected” moviegoers.  However, it’s still pretty amusing stuff, and viewed as a cavalcade, for the music, choreography, and glamour, not so much for the story, it is an entertaining and exuberant picture.  It is excellent musical comedy, filled with honest frivolity, atmosphere, and at least one unforgettable song.