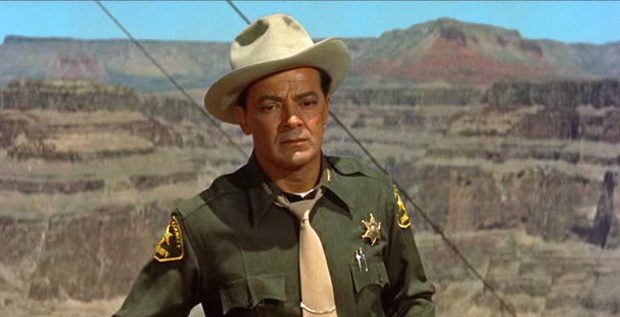 Toronto Film Society presented Edge of Eternity (1959) on Monday, March 12, 2018 in a double bill with The Naked Jungle as part of the Season 70 Monday Evening Film Buff Series, Programme 6.

Mickey Shaughnessy, six feet tall and 210 pounds, briefly cornered the market on playing tough Irish lugs.  While serving as an Army drill instructor in World War II, the Golden Glover coached the boxing team.  The ex-longshoreman was often called upon to play former fighters.  He is best known as the jealous cellmate turned manager of Elvis Presley, who endangers both their livelihoods when he punches the singer in the throat in Jailhouse Rock (1957).

Shaughnessy started out as a singer, before becoming a comedian.  While serving in the army he appeared in a US Army revue called “Stars and Gripes”.  After the war, a Columbia Pictures producer saw him performing on stage and offered him a screen test.  In addition to his film career, he also worked in radio and television, as well as having a nightclub act.

Shaughnessy appeared in North to Alaska (1960) with John Wayne and Stewart Granger, opposite Gregory Peck as the punch-drunk boxer in Designing Woman (1957) and squared off against Glenn Ford in The Sheepman (1958).  On TV, Shaughnessy wrestled Aldo Ray on the 1962 episode of The Virginian titled “Big Day, Great Day.”  He shouldn’t disappoint in tonight’s film, Edge of Eternity against Cornel Wilde.

In his later years, Shaughnesy lived with his wife and seven children in Wildwood, New Jersey, where he died at the age of 64 from lung cancer.

In the 1950s, Arizona Deputy Sheriff Les Martin (Wilde), with the help of femme fatale Shaw, investigates a string of mysterious murders around a mining ghost town near the Grand Canyon. The star, Cornell Wilde, was an extremely interesting and multi-talented man. He was born in Hungary on October 13, 1912 with the given name of Kornel Lajos Weisz. His parents moved to the U.S. in 1920, and his name was anglicized to Cornel Louis Wilde. He attended school in New York and enrolled as a pre-med student at City College of New York (CCNY), completing the four-year course in three years. (At that time, CCNY was tuition-free and admitted only the best scholars.) While there, he was a member of the school fencing team. His fencing skills earned him a spot on the U.S. Olympic Fencing Team but he turned down the opportunity to take part in the 1936 Olympics to pursue an acting career. Along with his fencing skills and medical knowledge, he was fluent in Hungarian, English, French, German, Italian, and Russian. His artistic talents allowed him to illustrate a 1936 textbook on fencing and he wrote a fencing play, Touché, under the pseudonym Clark Wales, in 1937. Like so many actors before their film success, he held a variety of jobs, including commercial artist; toy salesman at Macy’s; newspaper advertising salesman; and Boys’ Club counselor.

In one of his first acting jobs, he toured with Tallulah Bankhead in a production of Anthony and Cleopatra. He met and married his co-star, Patricia Knight; they divorced in 1951. Acting jobs were sporadic, over the next few years, so he supplemented his income with exhibition fencing matches and Knight also did modeling work. In 1940, he was hired by Laurence Olivier as a fencing instructor for a production of Romeo and Juliet, and was given the role of Tybalt. His performance in this role led to a Hollywood film contract with Warner Brothers. His Warner contract had him appear in an uncredited role in Lady with Red Hair; a small role opposite Humphrey Bogart in High Sierra (1941); and small roles in Knockout and Kisses for Breakfast (also 1941). He worked for other major studios during his career, including Fox, Columbia, and RKO. His defining moment came with his Academy Award nominated performance as Fredric Chopin in the hit A Song to Remember (1945). His fencing ability and athleticism led to his being cast in many action films, and his good looks had him cast as a romantic lead. His notable co-stars included Gene Tierney and Jean Crain in Leave Her to Heaven; Maureen O’Hara in Homestretch and At Swords Point; and Ginger Rogers in It Had to be You. He was very active in radio as well as film during the 1940s. In the early-1950s, started his own production company, Theodora, with his second wife, Jean Wallace, releasing films through United Artists and Columbia. As a director, writer, and star he made films-noir and action films working with, among others, Don Siegel and Nicholas Ray.

In the 1950s, his TV work had him appear as himself in episodes of I Love Lucy and Father Knows Best. In the 1960s, he worked in Britain and Italy, making the films Lancelot and Guinevere and Constantine and the Cross. His most highly regarded film as a director is The Naked Prey. It was originally meant to be a western, but lower production costs in Rhodesia had the theme changed to a safari guide pursued by African tribesmen instead of a fur trapper pursued by Blackfeet in Wyoming. It received mixed reviews upon its release, but is now considered a minor classic. He followed this film with Beach Red and No Blade of Grass. In the 1970s, he took a break from movies to do TV work. He appeared in an episode of “Rod Serling’s Night Gallery” and the TV movie Gargoyles. His last films included the exploitation film Sharks Treasure, meant to capitalize on Jaws’ success; The Norsemen, an action film with Lee Majors; and the star-studded The Fifth Musketeer. His last film was the drive-in B-movie Flesh and Bullets; a blatant rip-off of Hitchcock’s Strangers on a Train. The director, Carlos Tobalina, took time off from directing pornographic movies to make this mess. Wilde appeared along with stalwarts Aldo Ray, Cesar Romero, and Yvonne DeCarlo. I guess we all have bills to pay.

Cornel Wilde died in 1989, three days after his 77th birthday, due to leukemia. He was survived by his daughter, Wendy, and son, Cornel Wilde, Jr.; two stepsons, Pascal Franchot Tone and Thomas Jefferson Tone; and three grandchildren. He is interred at the Westwood Memorial Park Cemetery in Los Angeles and has a star on the Hollywood Walk of Fame. Unlike many of his peers, Wilde was ambitious and his talents gave him his successful second career behind the camera as a producer, director, and sometime screenwriter. Many of his contemporaries often wondered what drove Cornell Wilde. “I realized long ago that I could not depend on luck to bring me success. I worked hard, extra hard to improve my chance by increasing my abilities and my experience. It was my goal to accomplish, in my life, something of value and to do it with self-respect and integrity.” This epitomizes his work ethic to becoming successful in all that he did.