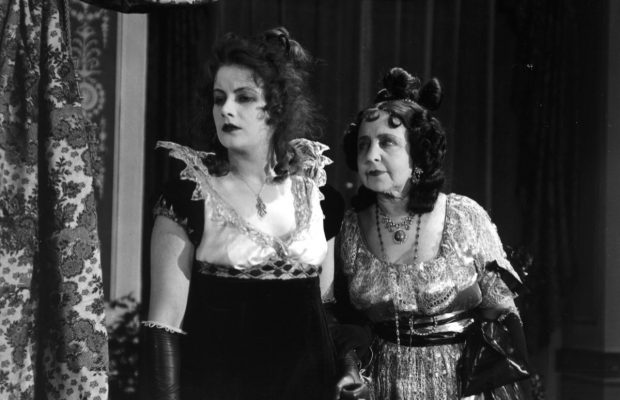 The programme will open with a Laurel and Hardy comedy, Double Whoopee, followed by a ten-minute intermission.

THE SCANDINAVIAN CINEMA (I)

Forsyth Hardy in Scandinavian Film, writing of the two names of silent Swedish film, Victor Seastrom (whose American film The Scarlet Letter we saw last year) and Mauritz Stiller, says: “The work of both directors had much in common.  Both were conscious of the contribution which national legend and character could make to the screen.  Both turned instinctively for material to the works of Selma Lagerlof, with their combination of ardent puritanism and passionate love of nature.  Both were sensitively aware of the virtue the camera could draw out of inanimate objects.  The qualities they shared were the qualities which gave the Swedish cinema its brief period of flowering.  Stiller was the lesser artist and his record is uneven, though it includes some notable work.  Whereas Seastrom made his films, as it were, from the inside, expressing his emotion through a deepening of the conflict and an intensification of the actor’s part, Stiller employed the external devices of camera work and editing to secure many of his effects.

“Gosta Berling was the last film produced by Stiller in Sweden before his departure for Hollywood in 1925.  Perhaps because of its association with Greta Garbo, it is one of the Swedish films best known outside its country of origin; but, at least in the version circulated abroad, it hardly justifies its reputation and is a less satisfying film than The Treasure of Arne.  The long complicated novel with its vast theme full of plots and sub-plots, was originally filmed as a work lasting four hours.  For showing outside Sweden it was condensed to about half this length.  The action of the story inevitably suffered, together with the dramatic logic of the work, while the rhythmic development was destroyed.  It was not difficult to understand why the director was accused of obscure and arbitrary ellipses, melodramatic effects and the absence of a convincing psychological argument.  Nevertheless the cut version did suggest something of the scoope of the original.  It retained the spectacular scenes–the expulsion of the clergyman, the merry-making at Ekeby Castle and the pursuit by wolves across the snow–it retained, too, one of the quieter scenes: that in which the Mistress of Ekeby seeks out her aged mother and silently begs her forgiveness.  Moments such as this, when the camera was used to express great depths of feeling, showed Stiller’s gifts as a director.  Among serveral memorable performances, Greta Garbo (who had appeared only in some short publicity films and one Sennett-type comedy) revealed extraordinary sensitiveness and a range remarkable in so young an actress–Lars Hanson made a dramatic figure of the clergyman.”

From the Museum of Modern Art’s Film Notes: “Stiller’s interest was less in plot than in character and incident.  He employed all known and many new resources of lighting, photography and composition; scenes such as those of the sleigh-ride and the burning house seemed technically daring and unusually effective at the time.  His film, with its excellent settings and costuming, combines pictorial beauty with psychological complexity and achieves a continuity which is emotional rather than physical.  It manages to convey the impression of some foreign but convincing world, inhabited by singularly real people, and it sums up to a truly romantic whole, expressive both of the period and of the original novel.  Despite the interest of this early performance of Miss Garbo’s, and the pleasure of detecting in it qualities that since contributed to her success, actually the characterizations by Lars Hanson as the Byronic hero and Gerda Lundeqvist-Dahlstrom as the Mistress of Ekeby are more striking.”

Bardeche and Brasillach in History of the Film say: “All the faults and virtues of the Swedish film could be detected in this production–from one of the most difficult of all novels to reduce to the screen.  We get only glimpses of the story, compressed and curiously threadbare, compared to the strident, sonorous music of the original.  But Stiller displayed considerable skill in this film–moments of impressive spectacle and sheer beauty–at times, by his artistic discretion and the strange atmosphere he creates, catching the essence of Selma Lagerlof.  The finest thing about the film is its choice of types, the faces of its people.  The most striking episode is the reunion of the Mistress of Ekeby with the mother who had cursed her long years ago–a superb scene.  Gosta Berling is not a great film, but is one which may be seen over again with pleasure, and is quite lovely at moments.  The youthful face of Garbo, already at 17 having a tragic, almost hieratic quality; the restrained acting of Lars Hanson and the almost inconspicuous, painter-like style of Stiller make this unequal and disturbing work one of the curiosities of the motion picture.”

MAURITZ STILLER was brought to Hollywood by M-G-M on the strength of his work on this film; according to all reports it was only on his insistence that Greta Garbo (whom he had discovered, nurtured and trained as assiduously and autocratically as von Sternberg had Dietrich) was also given a contract in Hollywood.  Her subsequent meteoric rise and fame need no elaboration; but unlike his pupil, the master did not fare well.  He was taken off a Garbo film, The Temptress (reportedly because others objected to his authoritarian methods) and replaced by Fred Niblo.  Later he directed Pola Negri in Hotel Imperial, his best American film and one of Pola’s–but this film seemed much more in the style of its producer, Erich Pommer, than of Stiller.  After two more pictures for Paramount–Negri’s The Woman on Trial and Jannings’ Street of Sin, both interesting but hardly distinguished–Stiller left Hollywood and shortly thereafter died.