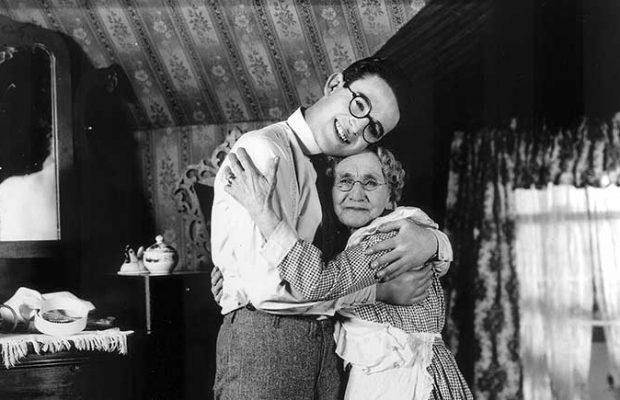 James Agee, in his famous article Comedy’s Greatest Era, says of Harold Lloyd: “He looked like the sort of eager young man who might have quit divinity school to hustle brushes.  He depended more on story and situation than any of the other major comedians; he kept the best stable of gagmen in Hollywood.  He had an expertly expressive body and even more expressive teeth, and out of his thesaurus of smiles he could at a moment’s notice blend prissiness, breeziness, and asininity, and still remain tremendously likeable.  His movies were more extroverted and closer to ordinary life than any others of the best comedies; he was especially good at putting a very timid, spoiled or brassy young fellow through devastating embarrassments.  He went through one of his most uproarious Gethsemanes in Grandma’s Boy.  The chase and fight are a high point in melodramatic slapstick, thanks importantly to the terrifying face of Dick Sutherland as the villain; and Grandma’s Civil War flashback is achingly funny.  Lloyd was outstanding even among the master craftsmen at setting up a gag clearly, culminating and getting out of it deftly, and linking it smoothly to the next.  If great comedy must involve something beyond laughter, Lloyd was not a great comedian.  If plain laughter is any criterion–and it is a healthy counterbalance to the other–few people have equalled him, and nobody has ever beaten him.”

N.B. – Members who saw Tol’able David this season may or may not feel that Grandma’s Boy is something of a comedy version of same!