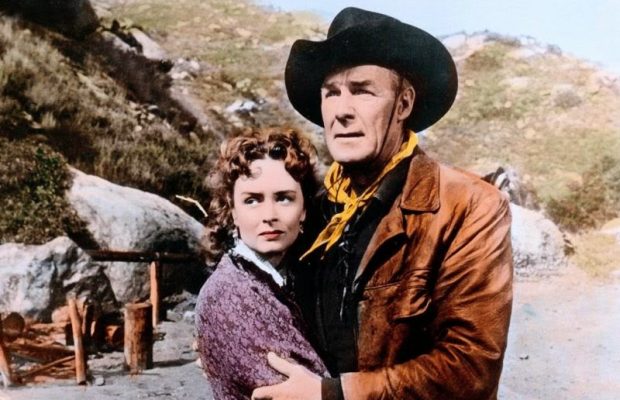 Toronto Film Society presented Hangman’s Knot (1952) on Sunday, March 18, 2018 in a double bill with The Man From Colorado as part of the Season 70 Sunday Afternoon Film Buff Series, Programme 6. 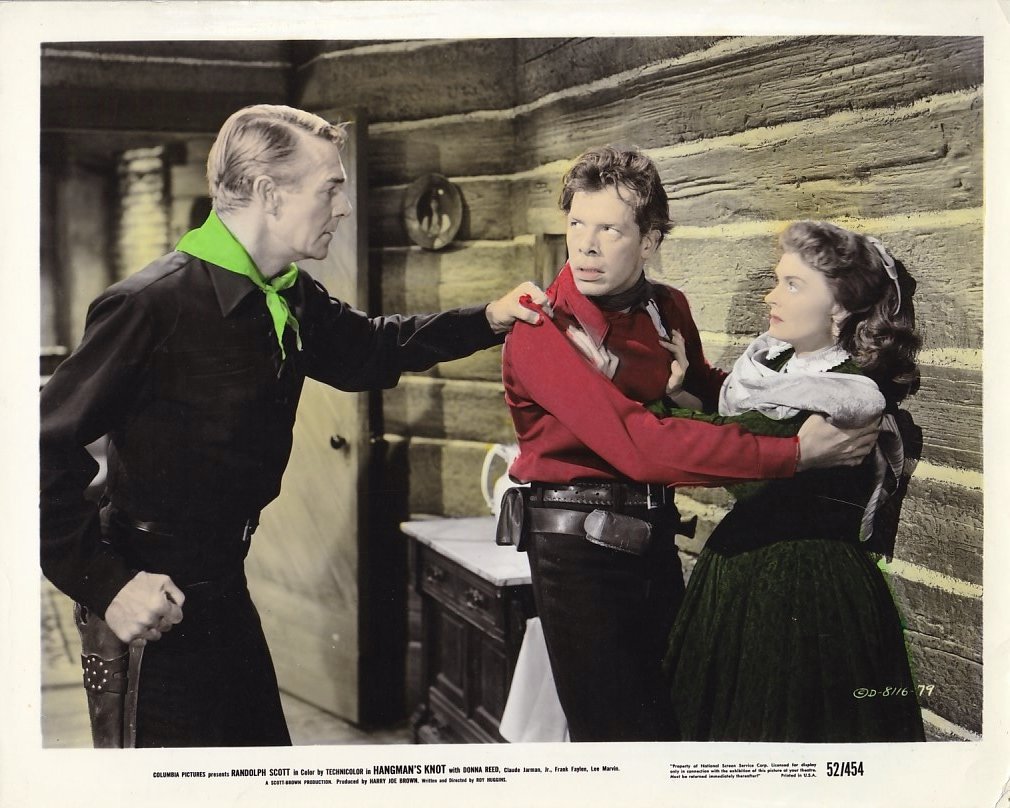 Hangman’s Knot was the first and last film to be directed by friendly House of Un-American Activities Committee witness and soon-to-be TV maven Roy Huggins.  Asked not long before his death whether the imagery of the Confederates traveling undercover and out of uniform which created the surprising impression of armed insurrection by US civilians was meant to be subversive, Huggins responded, “This is a Marxist interpretation and it may be,” in the sense that the Civil War was a war of “an imperialist, capitalist country against a colony trying to get away.”  Huggins evidently had the avidly pro-North Karl Marx confused with someone else, probably the 1920s and 1930s Progressive historians who cast considerable doubt upon the sincerity of erstwhile railroad corporation lawyer Abe Lincoln.  But Huggins had apparently affected through his own creative efforts a demi-Marxist interpretation with a twist.

During the HUAC era, threatened with a jail sentence or internment in a concentration camp, separation from his wife and children and long-term blacklisting, Huggins had named Communist Party members.  Although the majority of the people Huggins named were already known by the HUAC after being listed in the “Red Channels” booklet, among other sources, Huggins would later admit, “I was ashamed of myself….  I was caught unprepared and had a failure of nerve.  I don’t think there’s any question about it….  To cooperate in that respect, even though the names had already been mentioned, was, I believe, the wrong thing to do.  And that’s the only part of my part in this thing that I really regret.  I was not about to take the Communist Party tone which was to take the Fifth Amendment.  I decided I would do two things.  I would give them the names that they already had….  I was also going to state what they were doing was wrong.”

Following the HUAC hearings, Huggins was approached by Columbia Pictures vice-president Ben Kahane, who offered him a new seven-year contract.  Hangman’s Knot had been a critical and financial success and Harry Cohn wanted more of the same.  The job description on the contract read, “Roy Huggins, hereinafter referred to as the director.”

Huggins had no intention of becoming a full-time director but for the time being he remained quiet as Cohn sent him to Sedona, Arizona, to watch a master, Raoul Walsh, at work on Gun Fury.  Huggins, with his new bride and second wife Adele Mara, mixed business and pleasure with a honeymoon on location in Sedona with Raoul Walsh as the entertainment.  On location, Huggins and Adele were amazed to find Walsh directing scenes with his back to the action.  Adele offered the suggestion that Walsh turned his back on scenes that relied more on verbal than visual cues and listening to the actors gave him a better feel for their performances.  Huggins had a more practical answer.  Walsh was simply not interested and already thinking of the next scene.  Although Huggins had no intention of resuming the role of a film director, he admitted he “had learned more about directing on Gun Fury than I had on Hangman’s Knot.”

Sources: Hide in Plain Sight: The Hollywood Blacklistees in Film and Television, 1950-2002 by Paul Buhle and Dave Wagner (2003); Roy Huggins: Creator of Maverick, 77 Sunset Strip, The Fugitive and the Rockford Files by Paul Green (2014)

Guinn Terrell Williams had a film career that lasted from 1920 to 1961, but will be remembered by most film buffs as the often slow-witted companion of Alan Hale, Sr. Although they only appeared together in four films, their performances were certainly memorable. Williams was born on April 26, 1899 in Decatur, Texas. His father, Guinn Williams, Sr., was a Democratic congressman and a rancher. Guinn Williams, Jr. was raised on a ranch and learned to ride and do the work of a cowboy. This upbringing certainly helped in his film career. He joined the Army when the U.S. entered World War I. When he came home at the end of the war, now an officer, he found out that his father had secured for him an appointment to West Point. Williams saw no need to attend after his war service; he wanted to be a baseball player. This caused an estrangement from his father that lasted many years. He played on both major and minor league teams but was never able to make a career in baseball.

Williams made his way to Hollywood, where his size and riding ability brought him to the attention of film producers. He became a stunt rider and his first film role was in the 1919 comedy Almost a Husband, with Will Rogers. He became a close friend of Rogers, who gave him the nickname of “Big Boy”. Rogers introduced him to the game of polo, where he became a champion player and was called the Babe Ruth of polo. Despite the age difference, Williams and Rogers became great friends. Rogers had a group of close friends that he would get together to go hunting or fishing or on some other “adventure”. Williams would get a call from Rogers telling him that he was coming to pick him up; Williams never knew where they were going or for how long they would be gone. They remained close until Rogers’ untimely death in 1935.

After Almost a Husband, Guinn Williams appeared in non-credited and supporting roles until he was cast in a large supporting role, in Lucky Star (1929), directed by Frank Borzage and starring Janet Gaynor and Charles Farrell. In A Star is Born (1939), he again worked with Janet Gaynor when he was cast as a posture coach. He appeared in The Great Meadow (1931), with Johnny Mack Brown. He continued to appear in western, sports-themed, and outdoor-action films throughout the 1930s as a support player and as a leading man in mostly B-movies. In 1941, he was cast in Universal Pictures’ big-budget western serial Riders of Death Valley. He began to appear in more A-movies after that. He appeared in three films with Errol Flynn: Dodge City (1939); Virginia City (1940); and Santa Fe Trail (1940). Alan Hale, Sr. was also in these films, and he and Williams worked so well together that you can’t help but think of one when the other is mentioned. Flynn and Williams became friends and Williams was a pall bearer at Flynn’s funeral.

Williams was married to three actresses; the first being silent film actress Kathleen Collins, then B-movie actress Barbara Weeks. His last wife was Dorothy Peterson, whom he first met in the 1940s. Before meeting her, he had been engaged to Lupe Vélez, the “Mexican Spitfire”. She broke off the engagement at their friend Errol Flynn’s home in true Mexican spitfire fashion by breaking a framed portrait of Williams over his head and then urinating on the picture. Throughout his life, Williams was active both in community affairs and in the Methodist churches of Decatur and San Angelo, Texas and of Los Angeles, California. He worked with the regional Agricultural Credit Association; The Production Credit Corporation; The Goat Raisers Association; The Texas Wool and Mohair Company; and the Bankers Association in his home state of Texas and his adopted state of California. His last role was opposite his close friend John Wayne in The Comancheros (1961), directed by Michael Curtiz and John Wayne (uncredited). His health had not been good and he died unexpectedly of uremic poisoning on June 6, 1962, at age 63. It is thought that his years of polo and other sports had contributed to the condition.