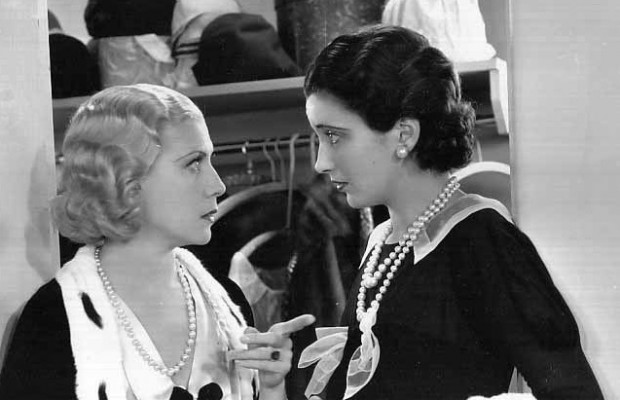 Toronto Film Society presented Girls About Town on Saturday, May 11, 2013 as part of Season 66 May Festival: The Pre-Code Weekend.

This is a film that is not available on DVD.  I had the opportunity to see it and  knew it would be of interest to you.  It stars Kay Francis, who is in a number of this weekend’s films, and Lilyan Tashman.  Kay and Lilyan were friends off-screen and Kay and her husband Kenneth MacKenna and Lilyan and her husband Edmund Lowe, both actors, would hang out together.  Tashman and Lowe were both gay, had an unconventional marriage and were among the elite “lavender couples.”  On March 21, 1934 she went into the hospital to have abdominal cancer tumours removed and died there at the age of 37.

Here is some interesting information I found in the book Kay Francis, I Can’t Wait To Be Forgotten by Scott O’Brien.  William Mann, commented on Girls About Town (and, in many respects, Kay

herself) in his book Behind the Screen:  “When Kay Francis strips down to reveal skimpy lingerie, it’s a declaration that sex and sexuality are defined here not by moralists and tradition, but by people who break rules and make up their own.”  Girls About Town appealed to a more sophisticated, urbane American audience.  Kay’s role was written by Zoe Akins (we showed The Greeks Had a Word for Them yesterday which was adapted from her play) with the outlandish Tallulah Bankhead in mind.  Bankhead, an unapologetic lesbian, was a star on Broadway.  Mann noted that in New   York “she flouted all rules of public behaviour and convention, revelling in her status as iconoclastic rebel.  Hollywood never knew quite what to do with her, either on screen or off.”  If the truth were told, middle America, and the scions of society, would look down with scorn on such charmers as Wanda and Marie in Girls About Town.  The vice squad, or worse, the FBI, would be hot on their trail.  One’s private life in the United States was open to the scrutiny of the government as well as fodder for gossip and scandal.  What was chic, accepted, or at least tolerated in European cultures, was forbidden and often illegal in the States.  So much for diversity.

There’s an unwitting and unintended punch scene in this picture to draw whimsy laughter.  It’s where Kay Francis shows off her figure in undies

while explaining she’s through with the gold-digger racket and intends going straight because she’s found love with a rich rube.  The undie pose and that bit about going straight all in one has its own satirical kick.  Bound for fair biz.

That may give an idea of how little use this film may be for the kid draw.  However, for elders it’s nutty enough to be funny.  If that finale plug for the A.T.&T. showing how necessary a phone is to a gold-digger, the picture would have and could have ended in the Zoo as Joel McRea (sic) and Kay Francis feed the monkeys.

That’s after a near-drowning and several presentations of spats between the two.  But even after, the picture travels on because Miss Francis suddenly reveals that she can’t marry the good-looking rube, because she already has a husband.  To avoid extra footage cost, the dialog is utilized to show the girl had really been divorced, although she didn’t know it at the time.

Altogether complexed in plot, but fittingly cast and with hoke touches of class atmosphere, plus sophisticated wise cracks, the picture gets pulled into the funny division.  The rub comes on how it may do in the smaller spots.

There’s a blackmail scene and a couple of upside-down romances that may interest.  For the happy ending the gold-digger gals are shown to have plenty of heart.  One even tears up a $500 check just for love of a man.  That’s depression’s biggest kick to advertise, if it could happen.

When Kay Francis falls for a young-looking sucker from a hick town the burn is on.  She’s the dame with a twisted virtue.  Only the boy friend would rather marry her than take her unawares even if

she’s willing.  For the modernists that’s goofy, but it’s worked sentimental-like here to get over.  Maybe Par shoved this out to beat U.A.’s ‘Greeks Had a Word for It’ to the market post.

There’s some additional sentiment brought in as between the elder of the two chumps as played ingenuously by Eugene Pallette and his middle-aged wife, as done by Lucile Gleason.  He’s a tightwad and practical joker from Lansing.  With the help of Lilyan Tashman, who does the gold-digger role as natural as it can seem, the bird’s wife works the old boy into a mad spree of jewelry buying.

New Yorkers and Brooklynites who will get their own laugh when they hear Lilyan Tashman phoning for her big playboy friend (Allan Dinehart) at the Brooklyn Paramount.  That’s the number used in the picture and may be an unwitting ad.

Photography okay even unto the yachting scene, which provides one of the best laughs with a slapstick bit showing Lilyan Tashman shoving Pallette into the ocean while he’s trying out a practical joke.  Also another where she tries to nail him for $3,000 on his offer to the girls aboard for retrieving a thrown golf ball out of the water.

November of 1931 was quite a month for colorfully-titled movies about girls in the big city, “Expensive Women”, “Left Over Ladies” and “Morals for Women” being just three of those offering

competition to “Girls About Town”.  It was the last and glossiest of Cukor’s films for Paramount, before moving to RKO and “What Price Hollywood?”, “A Bill of Divorcement” and the increasingly bigger films for Selznick.  It has far more than a casual relationship to “The Greeks Had a Word For Them”, a play (also written by Akins) that was essentially a comedy with dramatic interpolations, whereas this is a drama with comic interpolations.  At Warners it would have been a much tougher picture, but Cukor’s taste and a glossy pictorial style with a backdrop of fashion shows and yachting parties all tend to give it a seemingly higher moral tone without in any way diluting what is going on.  It’s not one of the very best of its genre, but it’s handsome, literate and full of people that are good to look at and listen to.  And the title design is a delight!

Lilyan Tashman and Kay Francis impersonate lilies of Broadway’s fields in “Girls About Town,” the present attraction at the Paramount.  This handsomely staged and ably directed production is one that affords no little laughter, but unfortunately it is burdened in the latter stages by highly improbable serious sequences.

“Girls About Town” has something akin to “The Greeks Had a Word for It,” for it is chiefly concerned with the crafty methods of attractive gold-diggers in obtaining gifts from susceptible provincial

men of means.  Like the play, it was written by Zoe Akins and George Cukor is responsible for the compelling direction.  In some respects it is an excellent fashion show, for both Miss Tashman and Miss Francis avail themselves of every opportunity to appear arrayed in the glory of the latest creations, which include gowns, pajamas and bathing suits.  And these actresses, representing the blonde and the brunette, look very attractive.  The blonde, who is named Marie Bailey, sticks to her, last, but the brunette, Wanda Howard, being of the species that gentlemen marry, falls in love and becomes the wife of a young man who only has to worry about the income tax.

Eugene Pallette has the role of Benjamin Thomas of Lansing, Mich.  Thomas has an emphatically parsimonious streak in his nature, but so long as he has money, Wanda and Marie feel sure of getting some of it from him.  Thomas, a copper king, has a weakness for playing practical jokes, with the consequence that while Marie calls him Benjy to his face, he is an annoyance to her when she is talking about him to Wanda in the privacy of their boudoir.

Thomas has discovered a golf ball that dissolves in water.  Aboard his yacht one bright morning he offers as much as $3,000 to the girl who will dive and bring up a golf ball he throws into the water.  It chances that Marie has observed Thomas, watching one of the golf balls dissolve in a glass of water.  She therefore gets a real golf ball, makes her dive and, to Thomas’s dismay, appears above the water with the little white sphere in her hand.  The stingy Thomas is astonished and he spars for time before paying the $3,000.

Marie and Wanda are on call as chatty charmers who consent to dine or sup with millionaires who might otherwise be lonely.  One, Jerry Chase, a business man,

is in the habit of calling them up and rewarding them with $500 or $1,000.  Thomas, being mean, actually believes that Marie likes him for his cheerful disposition, if not for his appearance.  On hearing his wife speaking of him as a skinflint when in a jeweller’s store, Thomas buys gems worth more than $50,000, just to contradict his spouse, but he gives the bracelets, necklace and a watch to Marie, expecting to have them returned to him.

The adapter of this story, however, decided that both Marie and Wanda must do something tinged with nobility.  What Marie does with the jewellery has a humorous turn, but Wanda’s conversation with her ex-husband over a matter of $10,000 has a ludicrous turn.

Mr. Pallette is capital.  Joel McCrea does quite well as the young man to whom Wanda loses her heart and Allen Dinehart gives a good performance as Jerry Chase.  Others who help this film are Robert McWade and George Barbier.