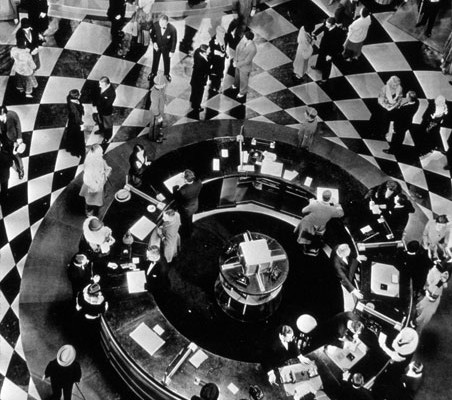 Toronto Film Society presented Grand Hotel (1932) on Monday, February 2, 1981 in a double bill with Mutiny on the Bounty as part of the Season 33 Monday Evening Film Buff Series, Programme 6.

“Metro-Goldwyn-Mayer’s and Edmund Goulding’s production of Vicki Baum’s novel and stage play, Grand Hotel, ranks, for a number of reasons, as one of the most conspicuous breakthrough movies ever made.  It was a prime example of how to make profitable use of the rich and increasingly attractive multi-star facilities of Hollywood, especially those of its largest and most opulent studio, MGM.  Into it the studio threw a platoon of top performers, including Greta Garbo, Wallace Beery and John Barrymore.  It mingled a motley assortment of interesting characters in a rigidly circumscribed location, wherein to reveal their various character traits and, within a limited time, resolve their problems or be propelled toward their destinies.  And it proved that the multiple-story format, which had seen service in novels and plays, could be more swiftly manipulated on the ever more flexible screen without confusing the audience’s attention by its shifting story lines.

“Here, in this creative venture, the smoothly rolling cameras had the range of the multiple locations within a Berlin grand hotel–the telephone switchboard, which was focused as a sort of nerve center at the start; the elaborate and always busy lobby and reception desk; the upstairs halls and various guest rooms where most of the intimate dramatic action took place.  And through the new conceptions of cutting, the flow was smooth, the cuts were sharp, and the whole production was given an uncommon and electrifying pace.

“…As one can see, the thrust of these small dramas was to point up the ironies of life, the unsuspected and bizarre twists of fortune and fate that may occur without others being aware of them in a grand hotel.  To be sure, they were rather obvious, shallow, and contrived, but the characters involved were engrossing and, in general, very well played.

“Most conspicuous, of course, was Garbo, whose conveyance of a Russian temperament, the dark moods and suddenly soaring spirits of an international ballet star was tremendously impressive when first seen.  She still is today.”