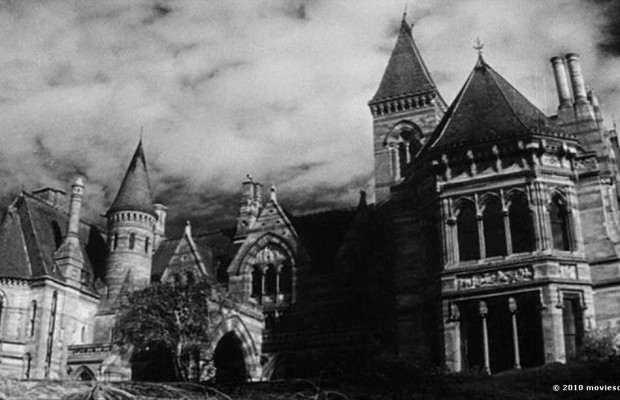 Toronto Film Society presented The Haunting (1963) on Monday, December 1, 1980 in a double bill with Enchantment as part of the Season 33 Monday Evening Film Buff Series, Programme 4.

The Hauntingis a full realization of the many talents of its director, Robert Wise.  His abilities in overall directorial concept, in visualizing a theme in compositions, and in short, intense, fast-moving scenes, are here in supreme combination.

As editor of Citizen Kane (1941) and The Magnificent Ambersons (1942), Wise was inspired by Orson Welles and is still greatly influenced by him.

In 1944 Wise made his directorial debut with The Curse of the Cat People an atmospheric tale of the ghostly world evolved by a lonely child in a darkly sinister mansion.

The Huntingis adapted from Shirley Jackson’s novel “The Haunting of Hill House.”  Hill House is an 80-year old mansion in New England which has a reputation for being evil and haunted.  A team of psychic researchers, led by Dr. John Markway (Richard Johnson) investigates the hapapenings at the house.  The House’s intention is to possess the pitiable Eleanor (Julie Harris).  Her guilts and loneliness seem to arouse something in the house.

The Haunting  joins in the small group of films, like Thorold Dickinson’s Queen of Spades and Stanley Kubrick’s The Shining, based on the principle that seen Things may be scary, but Things unseen are scarier.  There are no ugly monsters, clutching hands, or mouldering corpses. Wise almost entirely escapes the use of tricks, although he does employ them somewhat in two scenes.  One scene is where Eleanor is pursued by something unseen, the ghost of the house itself, then later on a balcony, she faints, falling backwards, the camera duplicates the movement of that fall.

Robert Wise’s Wellesian perception carries him through the entire film and reaches a visual climax in the repetition of four ascents up a weirdly designed spiral staircase.  With the early suicide (in the prologue) we look up the stairway for a reverse-angle “shock” cut at the dead girl who is suddenly hanging.  The second ascent up the stairway is made by the camera itself to approximate the feeling that Eleanor is being intrigued by it, that its spirit is calling her.  The camera romanticizes the ascent for her, with a swaying, tipping climb.  The scene is uncut; it is one visual flow.  When Eleanor actually ascends the scene moves more quickly.  There is a mood of a supernatural manifestation by short cuts from Eleanor’s sublime face to the stairs.  When the professor follows Eleanor to save her, the stairway tears away from the wall and begins a constant circular motion.  We have seen the stairway in four variations–through madness, romance, the supernatural, and finally reality.

What makes the film a cut above the ordinary film about the supernatural is that you are not told in the final scene that the butler did it.  The Haunting is a film which will raise a crop of goose pimples on you if you are not the type who wants everything explained neatly.