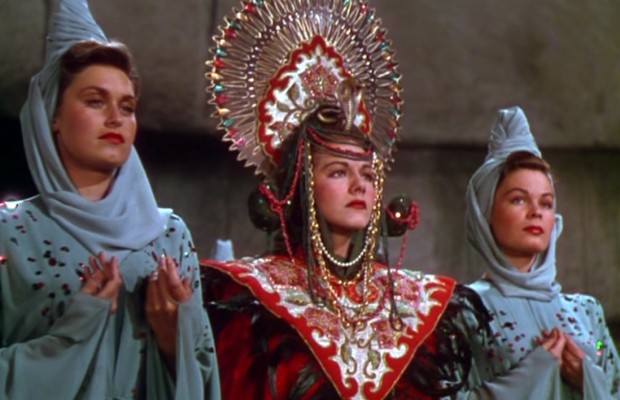 Toronto Film Society presented Cobra Woman (1944) on Sunday, September 30, 2018 in a double bill with The Thief of Bagdad as part of the Season 71 Sunday Afternoon Film Buffs Series, Programme 1.

Here’s a highbrow definition of today’s first film.  Distinguished film studies professor Lucy Fischer proposes that Cobra Woman’s theme of a tyrannical matriarchal society reflects male anxieties during WWII “when women were alone on the home front, left to function collectively without their men.”  Pre-empting Ms. Fischer’s retrospective claims, in 1944 the Universal publicity department made specific reference to the film’s allegorical transposition of a totalitarian wartime threat onto the categorically unstable female body.  The film’s pressbook emphasizes the “parallel between the situation in Cobra Woman and any occupied nation.”  It continues to explains how the split-screen technique allows for the metaphorical centring of the female body as the battleground where the war will be won or lost, to be literalized through the differences between Montez’s good and bad sisters.  Cobra Woman’s allusions to American women’s symbolically central wartime role were, therefore, clearly understood at least by the team working on the film’s postproduction publicity.

Meanwhile, New York Times reviewer Bosley Crowther, after playfully mocking the silliness and spectacle of Cobra Woman, managed to conclude his review with a kind of recommendation: “It is better than the funny papers, on which it is obviously based.”

Following the release of these types of Universal productions, Variety reported, “It pays to horrify according to statisticians at Universal where approximately ten million dollars in profits have been made by the company’s chiller dillers.”  Embracing these financial incentives, other studios reoriented their production schedules in order to reproduce the successes of Universal and RKO.

Both of today’s double bill features Sabu, the first Indian to become an international film star, and Britain’s most famous child actor before relocating to Hollywood where he died in 1963 at the rather tender age of 39 from a heart attack.

Sourced from Phantom Ladies: Hollywood Horror and the Home Front by Tim Snelson (2015); Wolf-Women and Phantom Ladies: Female Desire in 1940s US Culture by Steven Dillon (2015)

Programme Change (for Season 33):  TORONTO FILM SOCIETY regrets the necessity to substitute another film for the originally scheduled The Vanquished.  This week Paramount, the distributor, informed us that one reel of this feature was missing.  Searching for an appropriate replacement, we came upon Cobra Woman.

Maria Africa Vidal de Santo Silas y Gracia (Maria Montez, who ‘borrowed’ her last name from the legendary Lola Montez) was the most exotic of the triumvirate of dynamic, temperamental and flamboyant Marias (coincidentally, and ironically, each was educated in a convent) who flourished in American cinema during the World War II years but fell in rapid decline once the war was over.  Maria Guadeloupe Velez de Villalobos (Lupe Velez, 1908-1944) and Maria do Carmo Miranda da Cunha (Carmen Miranda, 1909-1955) were comediennes who used their ethnic comedy to brighten the mostly minor vehicles the studios handed them.  Maria Montez was the least talented of the three–she could neither sing, dance or act, but she was undoubtedly the best-looking and most sensual.  Her uncovered charms covered up her lack of standard talents to a degree that, for a very brief period between 1942 to 1945, she was one of the leading glamour girls of the movies.

Maria Montez, whose father was Spanish consul and embassy delegate to the Dominican Republic, was born to a family with nine other children on June 6, 1920, in tropical Santo Domingo.  After an early marriage to a wealthy Irishman had soured, she ran off to New York, became a model, made a screen test and was by 1940 a starlet for Universal Pictures.  She had only bit parts and small roles in a string of Universal ‘quickies’, Lucky Devils, The Invisible Woman, Boss of Bullion City and four other films, all released in 1941.  By 1942, Maria Montez was co-starring in her films, notably The Mystery of Marie Roget.  But her next film, Arabian Nights (1942, produced by Walter Wanger), really launched her career and governed her future style–as the “Queen of Technicolor adventures”.  It was Montez’s first starring role in a Technicolor film, and also her first picture with South Seas specialist Jon Hall, with whom she was to make four further features–besides this afternoon’s film, there was White Savage (1943), Ali Baba and the Forty Thieves (1944), Gypsy Wildcat (1944) and Sudan (1945).  All were exotic adventures with far away locales, cheaply made in Universal’s studios and backlots, and utilizing some of the gaudiest, most spectacular colour photography ever seen in films.  Some other Montez  films turned out during this period: South of Tahiti, Bombay Clipper, White Savage, Tangier, Pirates of Monterey–all of these films were short (60 to 80 minutes) escapist fare so popular during the war era.  Some of Paramount’s most rewarding films of the time were the Hope/Crosby ‘Road’ pictures.  Even after Montez became a star, Universal did not have the resources or talent to afford her major directors, scriptwriters or co-stars.  The only superior director she ever worked with was Max Ophuls, for whom she appeared in The Exile, a 1947 picture that was one of that exalted director’s major failures.  The director of today’s feature, Robert Siodmak, was a second-rank Hollywood stylist who churned out some of the 1940’s most evocative film noir: Phantom Lady, Christmas Holiday, The Suspect, Uncle Harry, The Spiral Staircase, The Killers, The Dark Mirror, Cry of the City and Criss Cross.  Cobra Woman, in the midst of those dark times, seemed to be Siodmak’s Technicolor-hued escape from reality as much as the audience’s.

When Montez’s seven-year Universal contract expired with Pirates of Monterey (1947), she embarked on a freelance arrangement; being fluent in Spanish, French and Italian, she filmed in France and Italy, sometimes co-starring with her second husband, Jean-Pierre Aumont.  One of her best films was Portrait d’un Assassin (1949, also known as Portrait of a Murder), directed in France by Bernard Roland, and starring Erich von Stroheim, Arletty, Pierre Brasseur and Marcel Dalio.  After completing a few Italian films, Maria Montez died suddenly of a heart attack in her home in Paris on September 7, 1951, and the age of 31.

Maria Montez was fortunate to maintain a career in the early forties, when audiences craved for escapist entertainment.  Today’s movie-goers would have been unlikely to support an actress of Montez’s limited assets; indeed, much of Montez’s dialogue is often ridiculed by modern audiences.  Maria Montez had one daughter, Tina Aumont, born in 1946 and today a well-known European film actress.