Toronto Film Society presented San Diego, I Love You (1944) on Sunday, December 10, 1989 in a double bill with The Cat and the Canary as part of the Season 42 Sunday Afternoon Film Buffs Series “A”, Programme 5.

When San Diego, I Love You was released, the film reviewers on Variety and The New York Times took totally opposing opinions, The Times finding it a “jerry-built, latter-day farce” that tried too hard to be funny and Variety finding it hilarious, a “whacky, laugh bellringer.”  Who ya gonna believe?!  Some subsequent opinions tend to agree with Variety and so, having never seen the film, and unable to offer my own critique, I offer Variety‘s.

“The is a sleeper.  There’s little in the routine title, cast lineup or outline of the plot to tip the volatile laugh contents.  San Diego, I Love You is patterned on the lines of The More the Merrier and My Sister Eileen.  It’s like the former because of war-crowded San Diego (instead of D.C.), while the Eileen resemblance is natural since Ruth McKenney, who did that play, co-authored this.

With Louise Allbritton and Jon Hall topping the capable cast, producer-authors Michael Fessier and Ernest Pagano have made a neatly gaited farce of the Ruth McKenney and Richard Bransten original.  Crisp dialogue, screwball situations and an overall sense of comedy are evident in nearly all sequences.  Miss Allbritton is spotted as the older sister in a large family trying to mother an obstreperous batch of four youngsters (her brother’s) and also peddle her dad’s collapsible life-raft.  With this premise, director Reginald Le Borg takes his group into dizzy, crowded San Diego on the hope that the life-raft invention will be approved by a research institute.  The remainder of the film concerns her encounter with Jon Hall, third richest man in the U.S., who helps the war effort with his research company, searching for new inventions. 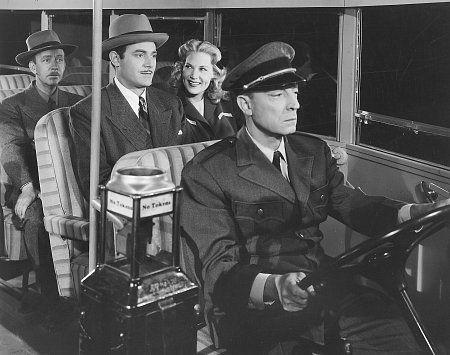 This does not account for abrupt entrances and more abrupt exits by Miss Allbritton from the scion’s private office, nor details the hilarious adventures of her brothers, typical American youths.  Nor does it cover the persistent obsequities of Eric Blore, the butler, who’s fired several times daily after the family discovers that he goes with the house they buy.  Nor does it adequately take in an uproarious bus ride, resulting from Buster Keaton’s decision, as pilot of the bus, to abandon the same route he’s travelled for 10 years, and Hall’s fight in a barber shop.  Bus ride blends nicely into the story (and) these are only a few of the laugh highlights which include the mistaken roomer, the hotel lobby sleeping episode, the speedboat climax, etc.

The screen scripting of Michael Fessier and Ernest Pagano is deft.  Their production likewise bespeaks intelligent handling and adequate mounting.  Director Reginald Le Borg has chipped in with the necessary temp required for a farce of this swift pace.

Miss Allbritton, as the invention-boosting daughter, makes fetching foil for the comedy situations, turning in her top comedian effort to date.  Hall plays the millionaire who owns most of San Diego including the research institute, and does nicely despite being the butt of many gags.  Edward Everett Horton is the high-school prof. with the brood of brat-like boys (and) Eric Blore is the usual eager-to-please butler…”

Louise Allbritton was an aristocratic but peppy leading lady of forties’ films.  Despite often being cast as the other woman (The Egg and I), she was poised, witty, with a fine sense of comic timing, and her talents worked best in screwball comedy.  However, she did not pursue an active film career after her marriage, in 1946, to news commentator Charles Collingwood.

The king of Technicolor, if slightly tatty eastern (and wester) films of the forties, husky, dark-haired Jon Hall probably “bronze-toned” up to play a South Sea Islander or Arabian adventurer more times than any other Hollywood hero, e.g., Aloma of the South Seas, Cobra Woman, Arabian Nights, etc.  When his waist thickened, he forsook films for a career in photography.  From 1938 to 1955 he was married to Frances Langford.

And what a supporting cast!  Proving less is more, Buster Keaton makes his short bus driver scene a comic highlight.  And there’s Brooklyn-born Edward Everett Horton, he of the inimitable crooked smile and diffident manner who has delighted filmgoers for many years with his superior twitterings and double takes  and his contemporary, Eric Blore, that “Gentleman’s Gentleman”, who played unctuous/insulting butlers and combined lifted eyebrows and a petulant pout into a trademark that made him world-famous.

Irene Ryan, a performer in Vaudeville and radio, achieved her greatest fame as “Granny Clampett” in the television sit-com “The Beverly Hillbillies”, which began in 1962 and ran for 9 years.  She made her Broadway debut in 1972 and won a Tony award for her portrayal of a regal but lusty medieval grandmother in the hit musical “Pippin”.

Austrian-born director, Reginald Le Borg, was an actor, stage manager and director in Vienna before moving to America like so many others, when the Nazis rose to power, arriving in 1935.  He at first worked for Columbia, MGM and Universal in various behind-the-scenes capacities, notably staging musical sequences to be inserted into other directors’ films.  Despite his providing background, he never really rose above minor “B” films, like Calling Dr. Death (the first of the Inner Sanctum series), followed by The Mummy’s Ghost, Dead Man’s Eyes, Weird Woman, etc. and got truly bogged down in a series of seven or eight Joe Palooka films.  His best film is considered to be San Diego, I Love You.