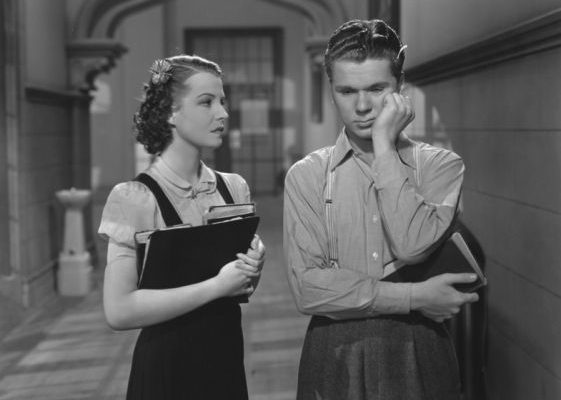 Toronto Film Society presented What a Life (1939) on Sunday, February 11, 1990 in a double bill with Our Town as part of the Season 42 Sunday Afternoon Film Buffs Series “A”, Programme 6.

Henry Aldrich and his group were the invention of Clifford Goldsmith, whose play “What a Life” opened in 1938 on Broadway, spawning a popular radio series with Ezra Stone repeating his stage role of Henry.  In 1939, Paramount turned the hit play into a pleasant film, retaining Betty Field and Vaughan Glaser from the original cast, but bypassing Ezra Stone in favour of Jackie Cooper.  Best of all, Paramount assigned their writing team of Billy Wilder and Charles Brackett to provide the script–and unlikely pair for such middle-American doings, one would think.  Two years passed before the studio decided to turn the Aldrich movies into a regular series; a decision strengthened no doubt by the continuing popularity of the radio show.  In 1941, Jackie Cooper repeated his role as Henry in a second outing, Life With Henry, a typically silly but likeable effort.  Then Paramount cast a newcomer, Jimmy Lydon, in the key role of Henry and surrounded him with a new supporting cast for a string of actual series films: Charles Smith as his laconic but shifty pal Dizzy; John Litel as his stern father; Oliver Blakeney as his forgiving mother; and welcome Vaughan Glaser as dour principal Mr. Bradley.  Nine films were turned out over the next 4 years. 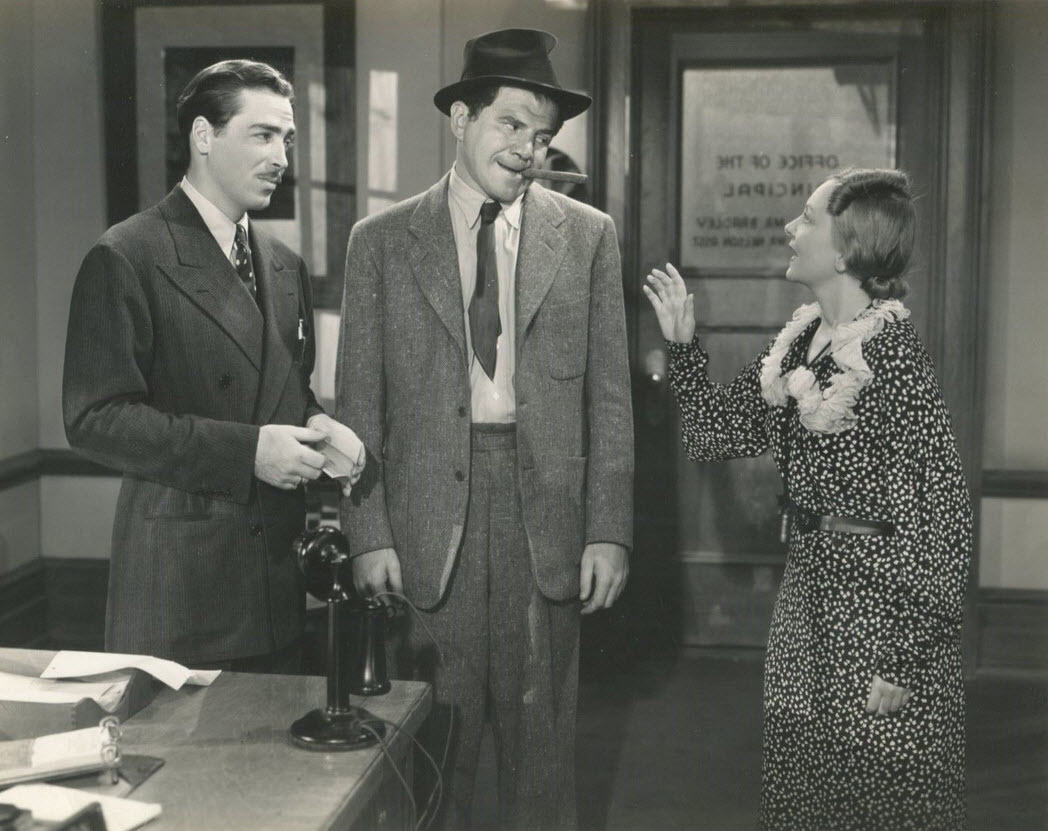 The Aldrich films fell into a pattern that proved generally successful; putting hopelessly blundering Henry into an increasingly complicated series of mishaps which would alienate him from his parents, sometimes his friends, and often the entire town, before culminating in a major action and/or slapstick climax in which Henry would be vindicated.  In Henry Aldrich for President, the finale is a wild airplane ride; in Henry and Dizzy, it’s a runaway motorboat, in Henry Aldrich, Boy Scout, it’s a cliff-hanger rescue; and best of all, in Henry Aldrich, Editor, there is a truly exciting fire sequence.  The films are consistently well-paced and slickly filmed, never belying their modest budgets, and filled with engaging players: Mary Anderson as Henry’s girlfriend in several entries (later replaced by Diana Lynn, and some less notable starlets); Frances Gifford as a movie star who accepts Henry’s prom invitation in Henry Aldrich Gets Glamour; Fritz Feld as a famous musician whose Stradivarius is accidentally “borrowed” by Henry in Henry Aldrich Swings It; Lucien Littlefield as an antagonistic teacher in two of the episodes; June Preisser as a vamp in Henry Aldrich for President; and Vera Vague as a potential wife for Mr. Bradley in Henry Aldrich Plays Cupid.  Best of all is Francis Pierlot as a character called Nero Smith, a pyromaniac who announces his intentions to Henry, leading to suspicions and troubles galore in perhaps the best series entry, Henry Aldrich, Editor.

All the “Henry Aldrich” films maintain a surprisingly good standard of film-making quality; good, lightweight entertainment; and the players fill their often silly roles with the kind of conviction that gets an audience involved.  “Henry Aldrich” later went on to be a short-lived TV series with Bobby Ellis in the lead; but probably to most people familiar with the character, Jimmy Lydon is best identified with the role of America’s dumbest high-schooler.  Dumb, yet in an odd way, endearing.

Much of the above information was gleaned from Leonard Maltin’s TV Movies and Video Guide.  Maltin states that Eddie Bracken played Henry’s sidekick Dizzy in both Jackie Cooper films, but I can find no reference anywhere to indicate that he appears in What a Life, although he is second-billed in Life With Henry.  So we shall see.

Variety‘s review of What a Life was typical of other contemporary reviews: “Retaining all the human appeal and rich youthful comedy of Clifford Goldsmith’s play…  Introduction to the Aldrich family in its first film appearance is confined to difficulties of son, Henry.  Hounded by continual reminder of his father’s Phi Beta Knappa honours at Princeton, youngster battles hard to get good marks in subjects necessary for Princeton entrance, but is more interested in cartooning.  Henry just can’t avoid trouble in school.  He’s the victim of every prank and wars a well-travelled path to the principal’s office.  Faced with suspension for cheating in an exam, and then accused of stealing the band’s instruments, Henry finally redeems himself by uncovering the culprit…  Character is a real American boy in his late teens, struggling mentally and physically to get through the awkward period and finding it particularly difficult to make his elders understand him.  Young Cooper is excellent…displaying a sincerity of characterization that will catch audience’s attention.”

“Picture is well-moulded narrative of high school life.  It’s realistic and rich in adolescent comedy and drama, and the best presentation of high school adventures on the screen…  Direction by Ted Reed is handled with understanding of youthful problems of formative years.  Provided with a fine script, Reed neatly blends drama and comedy with effectiveness, maintaining a steady pace throughout…

“Paramount utilizes three members of the stage cast for the picture.  Betty Field is most competent as the ingenue and puppy-love interest for Cooper.  She has youthful personality and charm that gets over on the screen…  James Corner transfers to the screen as the scholastic nemesis of Cooper, providing effective menace.  Vaughan Glaser is the sternly sour principal, providing a composite portrayal well remembered by high school students of every age as the big bad wolf they were familiar with…  Supporting cast is of general excellence…an all around entertainment.”

Calling What a Life one of the year’s better and brighter comedies, the New York Times reviewer singles out, in particular, the performance of Vaughan Glaser: “For the surprising success of this operation, the young principals, Jackie Cooper and Betty Field must be liberally credited; but to our perhaps biased eyes, the real protagonist of the piece, the centre and cynosure, the dramatic proscenium who holds the entire fragile structure together by his absolute comical rightness is Vaughan Glaser.  Mr. Glaser’s inspired portrait of an elderly high school principal–the wary dignity, the monumental patience (which has seen every possible form of bad boy, heard every possible excuse), the pedagogical deliberation (not unmixed with hamminess), the taste for neatly turned and rhetorically conclusive sentences, the ability to strip a lying pupil t the skin with ruthless professional logic–is not only the most perfect comical characterization of the year, but is something encountered only once or twice in a generation.  So flawless has Mr. Glaser become, by dint of long polishing at his performance (What a Life played for a year and 4 months on Broadway), that there is something almost eternal about his conception of Mr. Bradley.  If you have gone as far as high school in your academic studies, you will tremble in your boots when Mr. Glaser speaks, or looks at you over the tops of his bifocals”.