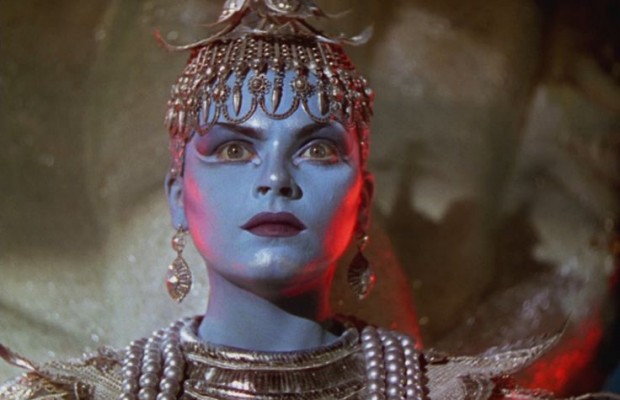 Toronto Film Society presented The Thief of Bagdad (1940) on Sunday, September 30, 2018 in a double bill with Cobra Woman as part of the Season 71 Sunday Afternoon Film Buffs Series, Programme 1.

Toronto Film Society presented The Thief of Bagdad (1939/40) on Monday, February 9, 1976 in a double bill with The Leopard Man as part of the Season 28 Monday Evening Film Buff Series, Programme 4.

When you look at the list of directors involved with the making of The Thief of Bagdad, there are six names listed.  The three that were credited were Ludwig Berger, Michael Powell and Tim Whelan, while the three who weren’t were the producers, brothers Alexander and Zoltan Koda and art director William Cameron Menzies.  Powell explains how this came to be in one of his many books:

The situation was very particular.  It took place…just before England declared war on Germany.  We were all very conscious of the imminence of war; however we worked on the project of The Thief of Bagdad, this enormous fairy tale in color.  One day Korda said to me: “Listen, Ludwig Berger is going to do the directing but I’m convinced that we will not have finished this summer before the war breaks out; do you want to join the team and produce the sequences that I ask of you?”  I accepted.  He proposed the same thing to Tim Whelan who was about to produce a sort of dramatic comedy for him.  I took charge of almost all of the exteriors, all of the scenes with Conrad Veidt, all of the big scenes.  Everything worked well.  Sometimes Alex came to direct a few scenes.  We worked in a very agreeable atmosphere.  The Saturday when the war broke out, we were still in the middle off filming in order to try to finish—the film was only finished in America….  The filming of The Thief of Bagdad is a good example of a happy collaboration between several artists….  [What I shot were] a certain number of very visual and decorative scenes like the arrival of a boat, all these wide-eyed shots.  Tim Whelan especially specialized in action sequences.  I don’t know for sure who filmed what.”

So, this at least gives some explanation as to why there were so many hands on deck and a broad idea of who directed what.

Take note of Miles Malleson, who plays the Sultan, as he wrote the screenplay and dialogue for most of the film.  Powell considered him an “Old Gent”, a wonderful writer, actor, and civilized character, and both Alexander Korda and Powell loved him.

“Everything is possible when seen through the eyes of youth.”  So says the elder of the Land of legend in The Thief of Bagdad and that is the key to the success of this movie.  It displays its wonders with a simple, youthful enthusiasm that is perfect for its subject–the expected magic carpet, etc., a really elegant 6-armed killer statue, and the one I remember most vividly–a truly terrifying giant spider.  It won Academy Awards for best photography, art direction, special effects and sound effects.  Most of the story derives, of course, from The Arabian Nights Entertainments, believed to have been first collected about 1450, but indelibly fixed in Western minds by Sir Richard Burton’s magnificent Victorian translation.

To say that this version of The Thief of Bagdad stands up to Douglas Fiarbank’s 1924 original (directed by Raoul Walsh) is perhaps highest praise.  Each is very different and each has delights not found in the other.  For one thing, in this version we have colour and contemporary reviewers believed it among the most successful uses of colour to its date.  For another, we have some delightful acting performances that are very different from those in the original (shown by TFS Silent Series, January 13, 1964).  Sabu Dostagir, the Mysore stable-boy discovered by Robert Flaherty for Elephant Boy (1937) is about as different a thief from Fairbanks as one could imagine.  I remember sitting next to Sabu in the Elgin Theatre in Ottawa during WWII, a strikingly handsome young man whose sheer elegance of manner outshone that of the Governor-General sitting beside him.  No one could be more menacing than Conrad Veidt or more hearty than Rex Ingram, while for at least one reviewer Miles Malleson’s polished Sultan stole the show.  Malleson also wrote the script, as he did for many movies in the ’30’s and ’40’s.  In small parts watch for Canadian actor Roy Emerton as the long-nosed jailer and Adelaide Hall as the singer.  Duke Ellington’s use of her wordless voice as a musical instrument introduced that concept to jazz music in 1927.  She had a very successful career in musical reviews in the U.S. and touring Europe and finally settled in Euirope permanently in 1936.  Interestingly, the lyrics to the songs she sings were written by the Permanent Under-Secretary of the British Foreign Office during the negotiations with Hitler that preceded WWII.  Shooting began in 1939, but the outbreak of the war forced it to move to Hollywood.  A third version, The Thief of Bagdad, was made by Joseph E. Levine in Italy 1960 (awful!) and there have been more than 120 other movies based on parts of The Arabian Nights (including one bearing just that title made in 1942 which also starred Sabu.

It is likely that production designer William Cameron Menzies had more to do with the style of the present version than did any of the directors associated with it.  His credit of “Associated Producer” here probably reflects his pervasive influence, an influence which Doug Davidson has pointed out is found in virtually everything he worked on.  Probably the greatest art director the movies have had, he had won Academy Awards for his art direction of The Dove (1928) and Gone With the Wind and had done the marvellous production design on the 1924 “Thief”.  Typical of his genius is the fact that he chose a completely different style for the present version.  He often worked as the actual director as well as the art director of movies, as well as on scripts.  He also independently made a series of shorts in 1930 which anticipated the ‘Fantasia’ idea by a decade.