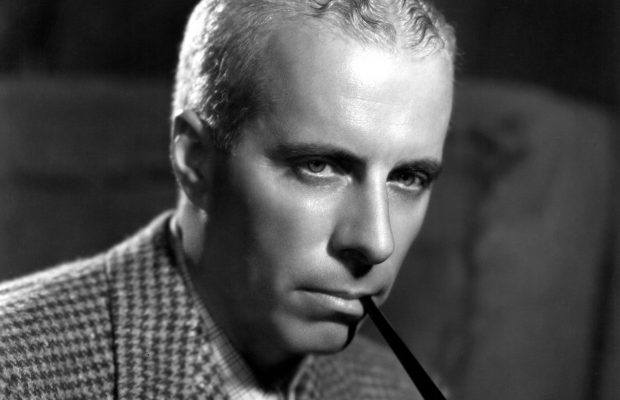 Howard Hawks’s directorial career has been extremely long, spanning both silent and sound eras, and he is still active.  While many directors have their specialties at which they excel, Mr. Hawks is notable in that he has made landmark movies in almost every conceivable genre.  One’s continual reaction in looking over a list of his movies is “Did he do that one, too?”.  In this Summer Series, TFS has chosen representative gems from his various genres in a small tribute to the man’s wide-ranging contributions to the movie art, which, by the same token, provides a delightfully varied programme of outstanding pictures.  Besides the staggering experitse which Howard Hawks always displays in handling any subject, he has made particularly noteworthy contributions to film grammar in two areas.  The first of these is in his experiments in the naturalistic handling of dialogue.  His characters talk to one another, interrupt one another, rather than deliver lines.  An extreme example of this is the mile-a-minute barrage of words in His Girl Friday.  The other is in his method of handling action scenes, in which he prefers to organize the action, then take it in lengthy shots, usually with a moving camera–the exact opposite of the Eisenstein method of multiple cuts.  This method, developed in the ’30’s and ’40’s, turned out to be particularly appropriate to the wide screen, making Hawks, in the opinion of many critics, the man who has led the way into a visual philosophy oriented specifically to the wide screen, rather than just adapted to it.  One thing is certain: a Howard Hawks movie moves.

A GENERAL NOTE ABOUT THE FILMS OF HOWARD HAWKS

Howard Hawks’ use of comedy is one of the characteristics that sets his films apart from those of other directors, lending to them an easily recognizable structure and a personal viewpoint.  Hawks is unique, I think, in that he has continually intermixed comedy with violence, producing films that treat certain aspects of human foibles and human problems.  This intermixture is the element that gives to Hawks’ films a sense of the unpredictable–although we may laugh, we can obtain little comfort from Hawks’ comedies–their surprising vicissitudes parallel those of our own lives.  Hawks intermixes comedy and brutality, comedy and pathos, comedy and danger, etc., producing films that are not entirely one sort of thing nor another but that, through their ambiguity, puzzle and confuse us.

Comedy is, I think, an integral part of Hawks’ outlook.  Whereas many filmmakers often search unsuccessfully for comic ideas, Hawks seems unable to avoid comedy.  This is quite probably because comedy in Hawks’ films is not something that has been deliberately contrived but is rather a point of view about the world and arises naturally as the result of perceptions.  Hawks does not seek comedy–he is simply unable to close his eyes to the comic world in which we live.  As early as 1927 with Underworld*, this is also a film in which violence and comedy are interchangeable and one where comedy is arguably the most truthful representation of the subject in question.

Hawks’ comic view of life is one specifically concerned with man’s relationships–a picture of a man continually surrounded by others, by responsibilities and entanglements, a peculiarly American concern with the struggle to define and maintain the individual self, often at the expense of society.  It is for this reason that his films seem to dwell on character development while sacrificing narrative structure and seem to be studies of one’s words, thoughts, and actions upon others.  Most of Hawks’ films are, in fact, studies of small-scale social relationships.

If Hawks’ comedies mirror our puzzling and chaotic world, it is probably not because he is concerned with social or any other sort of reform.  His films seem content merely to picture chaos.  They appear to be primarily the reflection of a curiosity about the modern world and man’s lot within it.  The real centre of interest in his comedies seems to lie in studying man’s superior survival ability when faced with confusion and entanglement.  His films never cease to convey a belief in a human being’s ability to surmount the seemingly impossible: i.e. Dean Martin’s conquering of alcoholism in Rio Bravo, the flyers’ attempts to succeed at all costs in Only Angels Have Wings, the extremes attempted by Henri Rochard in his desire to be with his wife during their honeymoon in In Was a Male War Bride.

Hawks’ comic films point to a simple truth–that the line between comedy and drama is extremely thin and perhaps does not exist.  Indeed, many of Hawks’ films point to the frequent common dependence of both comedy and drama upon similar devices or sources such as chaos, surprise, incongruity, unhappiness, etc.  In a sense, Hawks has settled the problem of defining comedy that currently interests so many scholars by simply producing it from the most unlikely materials.  When asked about this question of the distinction between comedy and drama, Hawks maintains that only a difference of point of view is involved and that any drama can be turned into an interesting comedy.  It is perhaps relevant to recall that Hawks once agreed to make a film about a suicide (actually directed later by someone else under the title Fourteen Hours) only on the condition that the producer, Darryl F. Zanuck, would allow him to treat it as a Cary Grant bedroom comedy.