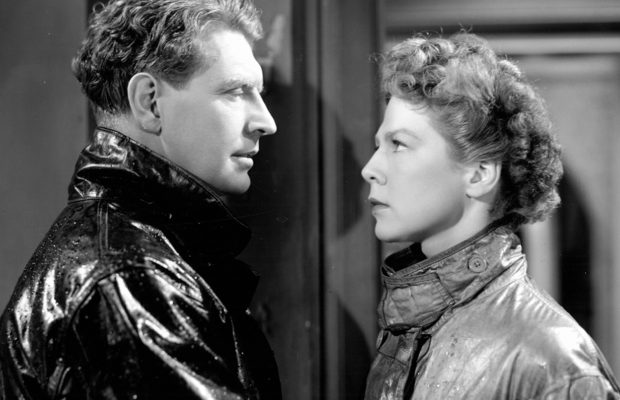 Toronto Film Society presented I Know Where I Am Going (1947) on Sunday, September 23, 1984 in a double bill with Back Street as part of the Season 37 Sunday Afternoon Film Buffs Series “B”, Programme 1.

Viewers of Director Bill Forsyth’s recent movie Local Hero will experience a feeling of deja vu while watching today’s film, for it, too, was filmed on an island in Scotland’s Herbrides–but, over 35 years earlier.  In its depiction of life on those remote islands, I Know Where I’m Going probably inspired Forsyth, as did the more famous Whisky Galore, released in 1949.

The prime difference, though, is that I Know Where I’m Going is in essence, a romantic drama, rather than a comedy.  It tells the story of Joan Webster, a girl who has always known where she was going in life–a materialistic young woman who believes that money is the springboard to all happiness.

As the story gets underway she is travelling from London to the Island of Kibran, in the Hebrides, to marry an elderly and wealthy industrialist.  A storm maroons her for eight days on the Isle of Mull in the company of Torquil MacNeil, a personable naval officer, and other Scottish folk; and for the first time in her life Miss Webster begins to live with her heart as well as her head.

This simple story line is developed with considerable imagination, wit and emotional insight into a thoroughly enjoyable and exhilarating romantic experience.  Practically all of I Know Where I’m Going unfolds on the rugged, picturesque Isle of Mull, and the Scottish inhabitants and their customs are exquisitely depicted.  The whole atmosphere of the film is done with the sound of whining wind and the crashing waves ont he rocky coast.

For star Wendy Hiller, it was her first screen appearance since 1941’s Major Barbara, based on George Bernard Shaw’s play.  She is best known for this role and that of Eliza Doolittle, in Pygmalion, with the memorable Leslie Howard as Professor Higgins in a non-musical version of Shaw’s play.  More recently, Miss Hiller has been cast as  Hungarian countess in 1975’s Murder on the Orient Express.

Of course, Roger Livesey, as her suitor, earned an indelible niche for himself to years earlier as “Colonel Blimp” in The Life and Death of Colonel Blimp–the story of a jingoistic, bumbling army officer.

The creators of this film were The Archers whose trademark was, appropriately enough, a target being pierced by an arrow; in actuality partners Michael Powell and Emeric Pressburger who followed the rather unusual practise of co-producing and co-directing as well as, in this case, co-writing.  During the 1940’s and 1950’s they were responsible for such famous films as The Red Shoes, 49th Parallel, Black Narcissus, and The Battle of the River Plate to mention a few.