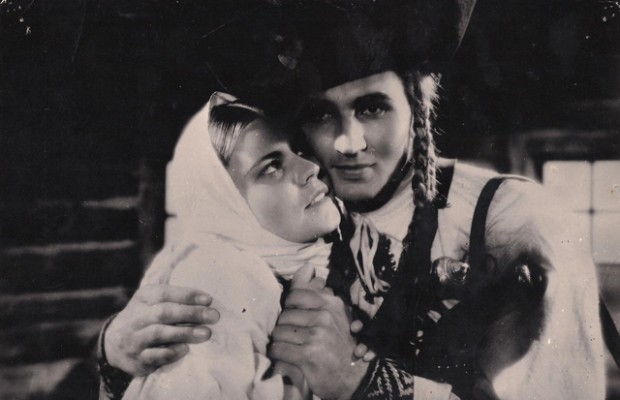 All members are urged to attend as this is a General Meeting. During Intermission a few minutes will be devoted to the casting by members of a vote upon the adoption of
National Film Society, Toronto Branch as a suitable title for this Group.

A dramatic exposition of the social and economic history of the Great Plains, from the settlement of the praires by cattlemen and farmers through the World War boom to drought and depression, with an epilogue of the New Deal’s efforts to rehabilitate the Dust Bowl through soil conservation and re-settlement. This famous film gave the initial impetus to the American documentary film movement, and established its director as one of the most important of our time.

An experiment in abstract by Norman McLaren. Pattern, shapes, line and colour, painted on the film, dance across the screen to the theme of “Listen to the Mocking Bird” played on a violin.

Janosik is one of the heroes of Czechoslovakian history and appears to occupy a position something equivalent to our more legendary Robin Hood. Living in the early eighteenth century, he waged a guerilla warfare against the tyranny of the feudal nobility. He showed the way to freedom and died defending his ideals. His dance of
defiance before he is tortured to death is beautiful. As the man dances, refusing to sell himself and his people at the price of his own life, he becomes the symbol of the struggle for happiness and freedom from oppression.

Outdoor scenes were shot in the Carpathian mountains. The film is characterized by vivid action, warmth and sincerity. Utilizing a minimum of dialogue, it employs music and songs. While the characters may at times appear to overact and overstress their facial expression, this is not due to lack of skill either on the part of the director or actors. Eric is visualizing for us a tale of epic quality and he treats it as astraightforward piece of melodrama.

The programme committee has received the following letter regarding Ivan the Terrible:
While passing through Toronto I had tho privilege of attending a meeting of your group in the Royal Ontario Museum Theatre. The feature was Ivan the Terrible and as opinionsas to its merits were asked for I will venture to suggest that the quality of the film is appropriately expressed in the third word of the title. It was not a motion picture at all. Rather it was an historical pageant, with the actors performing in the fashion
one rightly expects in such stage presentations, all right in its place but not as an alleged motion picture. As for the technical cinematic side there is reason to believe that a series of still pictures might have caught the spirit of the story better than the nearly static photographic recordings of the motion picture camera as used in this effect. On the whole the production might be correctly referred to as the most ambitious “lantern slide” production ever attempted. In spite of these views I must admit that the sincerity and enthusiasm of the makers did shine through and make parts of thefilm very moving. ” Angus Hanson, Galiano Island, B.C.

More letters will accompany the programme issued for the next performance on January 24.

The display of books on the film and related arts in the lobby of the theatre is by courtesy of the Rendezvous Book Shop.