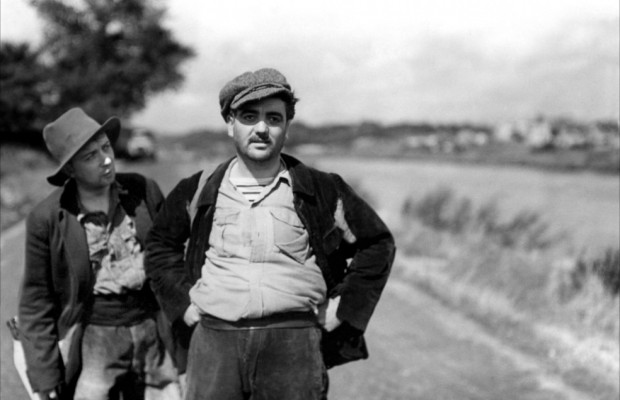 Luciano Emmer, an Italian painter, his wife and Enrico Gras, and early Italian experimentalist in the cartoon film, joined forces to produce a series of experiments in surrealist film attempting to develop a poetic documentary form. After the Ministry of Popular Culture condemned these films, Mr. Emmer and his wife retreated to Switzerland and Mr. Gras was conscripted into the army. Together again in the Panda Film Co., they are now producing a series of films based on classic painters, attempting to capture the spirit of the time and the dramatic conflict of the paintings. These artists have distinguished themselves in a series of remarkable films on the paintings of Giotto and Bosch: the one we are to see tonight is on a fresco by Giotto.

“To be numbered among the finest achievements of camera art, these films about famous paintings break new ground for the motion picture. The paintings have not been made the subject of a camera record, they have been used as the raw material for a film. The experience of seeing them is quite unlike that of examining reproductions or of viewing the actual paintings themselves. Here the director has analyzed each fresco and reassembled their elements into a dramatic sequence which follows the pattern of film editing rather than that of pictorial reproduction. …. The films speak so eloquently for themselves that they require no commentary, the sumptuous Renaissance music which accompanies being all that is required to point the inherent dramatic values of these remarkable pieces of film-craft.” ~National Board of Review, October 1948

Jean Vigo, who died before he was 30 in the autumn of 1934, left only a few films — all of them experimental, made on slender budgets and with much opposition from the distributors. His work remained unknown and unappreciated in France for many years and it took 15 years for America to discover him. In France today his films are shown in the neighbourhood theatres as the classical works of a genius and the young look upon him as a symbol of a creative film director in a losing fight against the bonds of the commercial film worlds

His first film, made in l929, was A PROROS DE NICE — a bitter satirical documentary on the Riviera resort; JEAN TARNIS, THE SWIMMING CHAMPION is a study of the famous swimmer — a sequence of which was shown in FILM AND REALITY, Zero de Conduite and his last film, L’ATALANTE show Vigo’s powers at their height.

Vigo was a rebel and rebels are not popular, particularly in the motion picture world, He was a rebel on two counts: against the screen formulas and against the established order of things. His father, editor of an anti-war magazine died in prison and from Vigo’s grim childhood onward he carried with him a bitterness which was to dominate his work, and developed into a man in revolt with the injustices of the times.

In Zero de Conduite Vigo depicted his own life in boarding schools and the rigors and cruelties imposed on the children, and perhaps wishfully, the vengeance of the children on their oppressors. The Paris censor banned it as an attack on the educational institutions of France and declared it harmful to children. In point of fact no more universally truthful film about children at school has ever been made. The strange rituals, secrecies, passionate enmities and friendships, the farce and the cruelty, the neuroses of some of the masters — all these are conveyed in a series of wonderfully ironic, poetic and merciless episodes. The slow-motion scene of the dormitory revolt, and the revolution at the end are among the most memorable incidents in any film.

Many new approaches were used in ZERO DE CONDUITE. Some could be called surrealistic, although Vigo was never considered a surrealist — his search for realism was too deep, However the use of memory elements somewhat distorted, as in the scenes of the dormitory and the walk in the afternoon, could justly be called expressionism.

Vigo was perhaps the most original and promising of the greater French directors – the loss France suffered by his early death was truly great. His creations, technical imperfections apart, were poems of realism. He possessed enormous power and imagination; he could have made great films… ~ Condensed from Hollywood Quarterlies, April & Winter 1947/48 and Sequence Six Winter 1948/49

Norman McLaren’s experimental work in the field of animation (members have seen this Season Fiddle-De-Dee, La Poulette Grise, and Cadet Rouselle) first received recognition in Europe through the Edinburgh Festival and now in Canada, Dots and Loops was singled out to represent his creative original work and given a special award by the first Canadian Film Awards held this Spring.

In Dots and Loops the visuals were made without the use of a camera by drawing with pen and ink straight onto 55mm film. The colour is not indigenous to the drawing, but is obtained by preparing several parallel strips in black and white which act as separation negatives for the colour dyes in the printing laboratory.

The sound track which produces percussion-like sounds in this film was also drawn straight on the film without the use of musical instruments or sound recording apparatus. Fine lines and shapes were drawn on the sound track area with pen and India ink. The frequency of the strokes controlled the pitch; the size of the stroke the volume; and the shape cf the stroke the tone quality.

Of this method of drawing directly onto film, Norman McLaren writes, “The method is as direct as writing or drawing on paper and has the same immediacy and intimacy in doing, This is its great asset as a technique, for it permits both improvisation and a purely personal calligraphic approach.”

Made in the early sound period, A Nous la Liberte was created in terms of motion in which the expression of the eyes and the movements of the body play a great part. The absence of English sub-titles offers no obstacle whatever to the understanding and enjoyment of this action-filled film, which has been described as funny as Chaplin.

This fantasy on mass production contains a simple story. Two friends in prison plan to escape. One gets out, the other is caught. Through a series of accidents the first becomes owner of a phonograph factory so large in scale that its employees, like its machines, are automatons, It is here that the two friends meet, when the second one, having been released from prison, is picked up as a vagrant in a field adjoining the factory and hustled into a job. The adventures of the two until the day when the factory-owner, who is about to be arrested as an ex-convict, gives his plant to the workers and escapes from his factory prison with his dreamy companion, who has failed in love, are as hilarious as they are ironic.

The technique of Rene Clair here is said to be much closer to the technique of music than of any other art. The picture has a theme – the theme of prison, which is first stated simply and then repeated throughout the picture with variations of rhythm and elaboration, rising to a climax in the famous scene in which mille-franc notes, silk hats, and respectable gentlemen whirl within the prison like walls of a great modern factory dedicated to mass production and profit.

NOTE REGARDING KAMERADSCHAFT: A few members complained about the images in KAMERADSCHAFT in which the heads of the actors were obscured by the edge of the screen. This is not the fault of the projection or the size of the screen, but of the print itself. In the duplication of a print from the original or dupe, this mistake, termed parallax, sometimes occurs. A complaint about this print has gone to the British Film Institute from whom it was purchased.