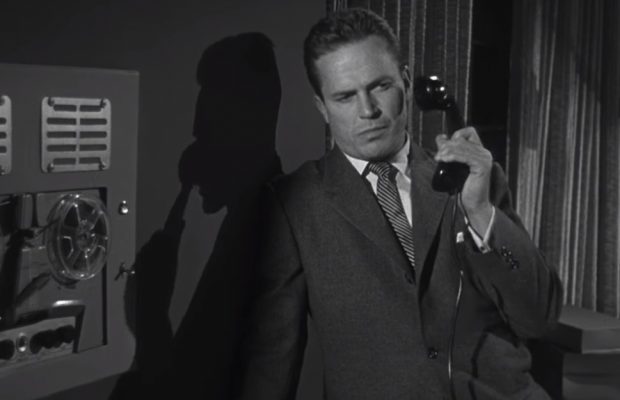 Toronto Film Society presented Kiss Me Deadly (1955) on Monday, January 13, 1986 in a double bill with The Blue Gardenia as part of the Season 38 Monday Evening Film Buffs Series “B”, Programme 6.

Tonight…a look at the world of “whodunit”??  A look through the eyes of two renowned directors…bringing their individual styles to what could have been very routine mystery films.

In the late 40’s, Mickey Spillane created a “super-hero” who was one of the first of a new breed.  Mike Hammer was the private-eye ‘hero’ of a series of violent and (for the time) very sexy novels.  There were few school-boys (and maybe school-girls) of the day who didn’t have the well-thumbed paper-back copy of “I, The Jury” tucked away in the pile of text-books, or under the pillow.  They were reading about a ‘hero’ devoid of any moral virtues…a detective about as far removed from the character of Chandler’s Phillip Marlowe as is Boy George from Bing Crosby in the world of music.

It was a world of blazing guns, near-naked ladies, sexual innuendos, a world greatly refined, but carried on by the likes of James Bond in later years.

There were four “Mike Hammers”…Biff Elliot, Ralph Meeker, Robert Bray and Mickey Spillane himself in the final film The Girl Hunters. 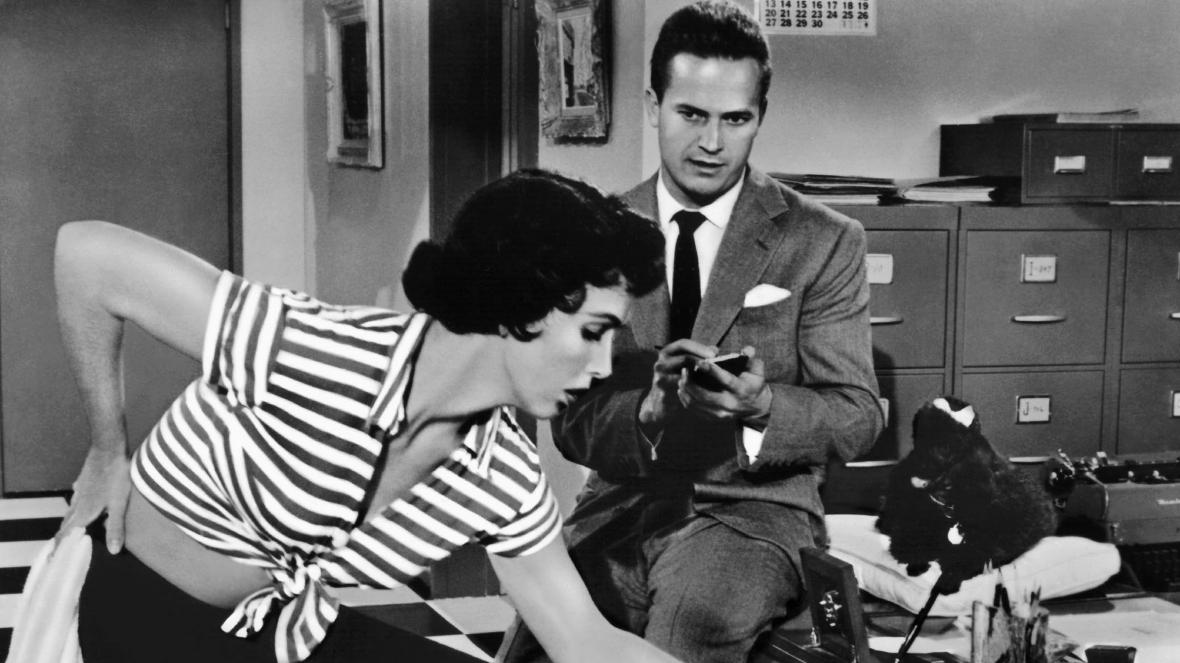 There is no doubt Kiss Me Deadly was head and shoulders above the other three offerings.  The same rock and sock combination of blood, action and sex is offered here under the hand of a skilled director.  He had worked with the best including William Wellman (The Story of G.I. Joe (46); Lewis Milestone The Red Pony (49); Charles Chaplin Limelight (52)).

Kiss Me Deadly is described by Georges Sadoul as “that marvelous reversal of the conventional thriller”, and by Leonard Maltin as a film “years ahead of its time, a major influence on the French New Wave directors and one of Aldrich’s best films.”

The basic chase plot involves what appears to be an attempt by a gang to take some sort of fissionable material out of the country.  But, that’s all left up to the viewer to figure out until near the end of the piece.

As usual, our “hero” is in constant trouble from the start…but survives in the end for another day…and another adventure.

Director Robert Aldrich had joined RKO in 1943 as a production clerk, then moved into the director’s field.  He turned to television in 1952 with the NBC series The Doctor.  He directed his first feature in 1953, and received major recognition with Apache in 1954.

Nat “King” Cole is unseen on screen, as he will be in our second feature tonight, but sings behind the titles.  Veteran arranger and conductor Frank De Vol contributed a very fitting musical score.