A SERIES OF AMERICAN ROMANTIC COMEDIES FROM THE ‘THIRTIES AND ‘FORTIES

AT THE CENTRAL LIBRARY THEATRE, 20 ST. GEORGE STREET AT COLLEGE

“I never saw anything funny that wasn’t terrible.  If it causes pain it’s funny; if it doesn’t it isn’t…Only, of course, it mustn’t be too painful.  I would never try to make love funny, for instance.  I was in love once myself and that’s too painful…that’s too painful!”

W.C. Fields quoted in The Enjoyment of Laughter by Max Eastman 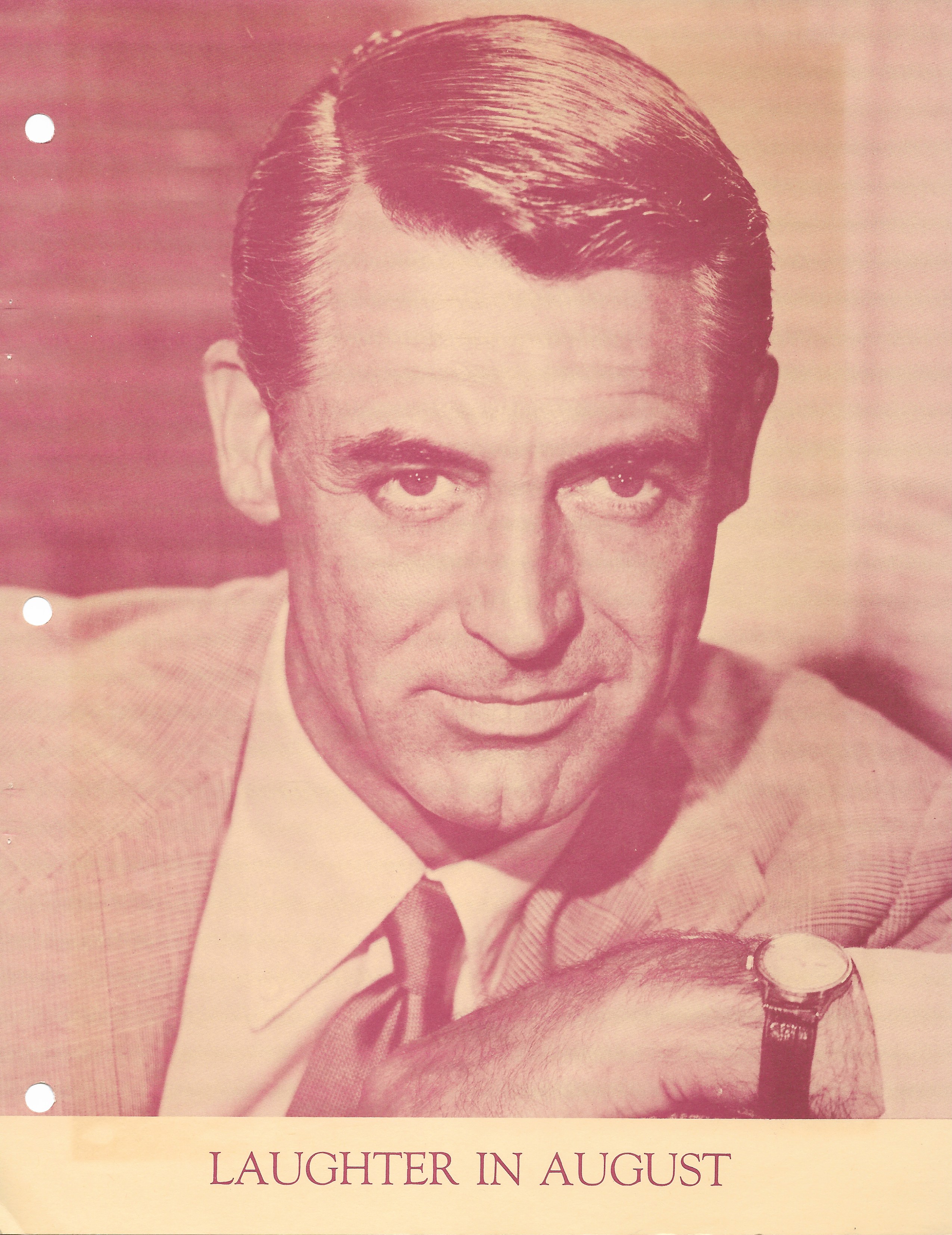 Well, be that as it may, the motion picture artists responsible for the works presented this season have had the courage, or the temerity if you prefer, to make love funny.  Painful, they undoubtedly are if you empathize with the hapless protagonists; but, we hope, not too painful.  Funny, we definitely believe they are.  Each of the our features derives in one degree or another from the battle of the sexes or the man-woman relationship in one of its infinite varieties.

The U.S. movie industry has always been noted for its success with comedy and each period has had its own characteristics.  In the ‘teens and ‘twenties it was the marvellous balletic orchestration of movement.  In the ‘fifties and ‘sixties we have had cynical sophistication and emphasis on overt sex, plus the glittering surface provided by colour.  The romantic comedies of the ‘thirties and ‘forties had equally notable characteristics–an expert counterpoint between a highly developed use of dialogue (and actors’ “business”) and cinematic action.  What is perhaps more important, they had a sense of fun out of life which is becoming rarer and rarer in our day.  These film-makers viewed their worlds warmly, indulgently, without hate, with tolerance for the human comedy.  If this will be your first visit to these worlds, we think you will enjoy it; if this will be a re-visit for you, you know you will.

In the “shorts” department, we give you Mr. Laurel and Mr. Hardy, who always had their problems with the distaff side and invariably came out second best.  What can one say about their marvellous comedy except that the world is a poorer place for their absence.  Just to prove that romantic problems are not unique for the human race, we give you The Sex Life of the Polyp as explained in his inimitable fashion by that noted lecturer, Mr. Robert Benchley.  Also on every programme will be a Warner Brothers cartoon.  We cannot really allege that Bugs Bunny is overly burdened by romantic entanglements or that the Coyote’s interest in the Road Runner is amatory, but that doesn’t stop them from being hilarious and among the greatest comedies of action since the days of Buster Keaton and The Keystone Kops.

This is the programme. Each performance begins at 8.15 p.m. sharp.

Programme subject to change without notice.  Admittance by season membership only and restricted to those 18 and over.  membership limited to the capacity of the small but comfortable and air-conditioned theatre.  Many were disappointed last season because we were fully subscribed so early, so get your application in now.  You have been warned!  Make cheque or money order payable to Toronto Film Society and send with application form below to Miss Helen Cowan, 21 Dupont Street, Toronto 5.  Memberships are $4.00 each. 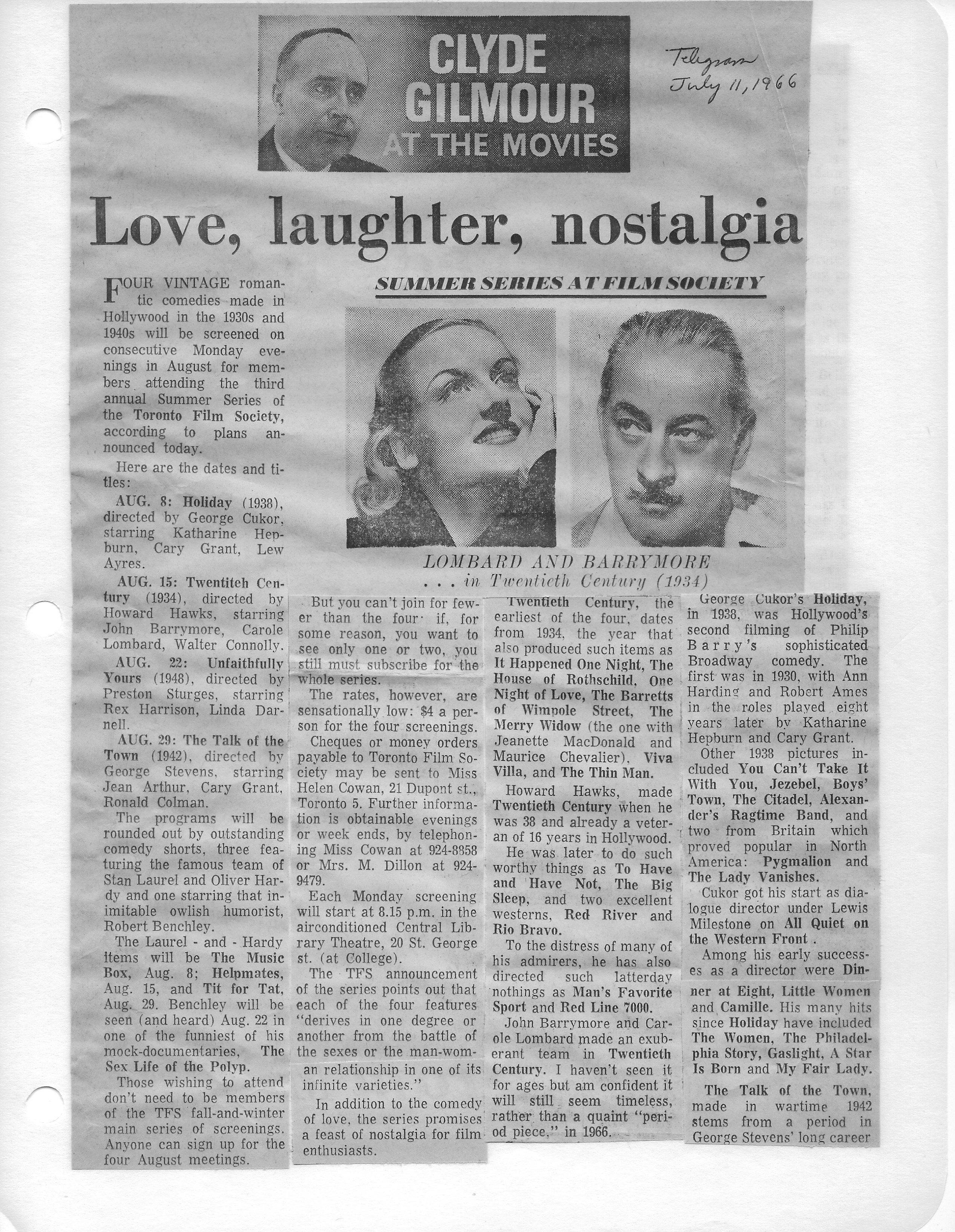