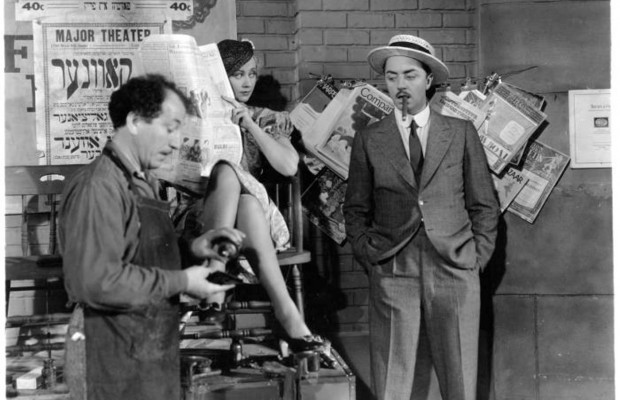 Toronto Film Society presented Lawyer Man on Friday, May 10, 2013 as part of Season 66 May Festival: The Pre-Code Weekend.

I attended the year William Everson brought this film to Cinefest and was delighted when a copy became available.  William Powell is always a joy to watch and this film won’t disappoint with beautiful women and Powell’s obvious attraction to them.  Keep your eyes peeled for a very obvious, but split-second sexual sight gag.

Any reports that ‘Lawyer Man’ is a steal of ‘Counselor at Law’ can be forgotten.  It isn’t.  The only similarity is that in both the play and ‘Lawyer Man’ central character is as East SideNew York attorney.  Warners have fashioned a picture around such a character that is surefire entertainment and from all indications good box office.  William Powell, as a draw in anything he does, is aided by the fact this is one of his best under the Warner banner.

Powell is the entire picture but in Joan Blondell as his secretary he has the wrong type opposite.  The two don’t seem to stack up right together though perhaps Miss Blondell is more the sec type than Kay Francis would have been.

Powell is at his best in the early sequences as a man who is sartorially the equal of a country hick.  He’s playing a new role and doing it extremely well, by degrees coming out of the hick character into his own.  This occurs little by little as he climbs to prominence in a forensic way until the character is both interesting and sympathetic.

Quite a number of good laughs permeate the action, but there’s little in the way of courtroom stuff.  Most of what happens in court rooms is covered by flashes of newspaper headlines entirely out of proportion to what would be given by the conservative New York paper whose masthead is photographed.

In the main Powell’s supporting cast is good, Miss Blondell turning in a fine job even though she’s in the wrong picture and the wrong role.  David Landau stands out as the political boss who traps the lawyer in a blackmail stunt in order to gain control of him, only to pay for it dearly in the end himself.

William Dieterle, who first came over to the U.S. to make foreign versions, is responsible for a workmanlike directorial job.  Possibly he can’t be blamed for the counsel’s return to Hester Street for an off-key finish.  Script may have demanded that.

If we spend less time on “Lawyer Man” than “Action for Slander”, it is only because it is a far more typical genre film, and in earlier notes of films like “The Mouthpiece” and “State’s Attorney” we’ve

covered the ground quite thoroughly.  Oddly enough, although the courtroom action is a key part of the narrative, the film itself stays resolutely away from the courts!  William Powell is such a good actor—and we are so familiar with the genre—that this deliberate avoidance of the familiar battleground hardly seems to matter.  It’s a fast-paced, snappy little melodrama, basically unreal enough so that one doesn’t consider the “moral atonement” climax either a letdown or a concession.  The film’s active libido is resolutely pre-Production Code too: one astonishingly suggestive sexual sight-gag (involving Powell’s cigar) would not come amiss in a contemporary porno film, but its basic wit, and Powell’s aplomb, make it perfectly acceptable in a tastefully outrageous way.  It’s an elaborately mounted film, so much so that back projection as a night-club scene is rather a surprise, and some of its comments on graft and respectable racketeering seem unrefreshingly contemporary.  There is a rather abrupt transition in one scene, doubtless due to the careless excision of a tv commercial somewhere along the line, but at most only a second or two are missing.

The latest picture to turn the light on the activities of a keen-witted member of the bar is “Lawyer Man,” which is now at the Hollywood.  Sometimes this feature recalls turns in “The Mouthpiece,” but the current offering is none the less quite entertaining.  William Powell does well as Anton Adam, who achieves a certain distinction through officiating as a lawyer for ghetto clients, and Joan Blondell gives a smart portrayal as Olga, Adam’s most efficient secretary.

One blonde helps Adam and another of the species gets him into trouble.  He has a weakness for a pretty face or a dainty ankle, which William Dieterle emphasizes in the course of the scenes.  In dealing with his colleagues Adam, more often than not, appears to have a shade the best of it.  However, it is really the author who gets Adam into trouble and therefore some might say that the man who wrote the plot is entitled to favor his main character occasionally.

Adam attracts the attention of Granville Bentley, a distinguished attorney, when he (Adam) succeeds in winning an acquittal for a thug.  Bentley, a corporation expert, wants a partner to attend to jury cases and after observing Adam in court he broaches the subject.  Not long afterward Adam goes uptown and for a brief time is happy in his new surroundings.  Then an attractive, flaxen-haired creature appears on the scene.  She is desirous of suing Dr. Gresham, who has a brother on the bench, for breach of promise.  Bentley is opposed to Adam’s taking the case, but the latter is one of those obstinate persons frequently beheld on the screen.  The attractive client succeeds in trapping Adam, who eventually finds himself indicted for blackmail.  The jury fails to agree and there being no further prosecution of the case, Adam seeks clients among the underworld.

He is so successful with racketeers and their ilk that Gilmurry, a political boss, asks the lawyer’s assistance and finally by crook and politician the attorney becomes an Assistant Prosecutor.

Parts of the dialogue are lacking in spontaneity, chiefly owing to the writer’s penchant for similes.  Allan Dinehart gives an effective interpretation of Bentley.  Helen Vinson is attractive as Bentley’s sister and David Landau handles the part of Gilmurry with is usual ease.