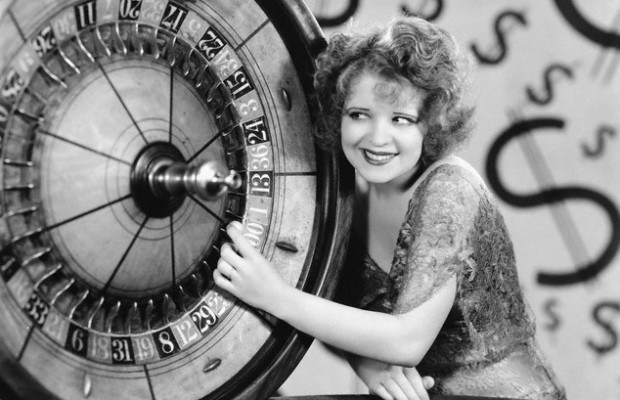 Toronto Film Society presented No Limit on Sunday, May 12, 2013 as part of Season 66 May Festival: The Pre-Code Weekend.

In the Variety review of this film there is mention of a recent scandal involving Clara.  I thought it would be of interest for us to hear what the scandal was about and I got the information out of David Stenn’s book.

Clara liked to gamble and along with her boyfriend and soon to be husband Rex Bell who was making the film Lightnin’  in Lake Tahoe, Nevada with Will Rogers, they along with Clara’s friend Daisy were invited to play at the legal gambling house, Cal-Neva.  Clara thought she was playing with 50 cent chips but after signing three blank cheques, Will Rogers warned her friend that a fourth cheque was being demanded by the casino owner, James McKay.  As it turned out the chips Clara assumed were 50 cent pieces were actually $100 pieces and instead of owing $69.50, she owed the casino $13,900.  McKay had taken advantage of having Clara, who had money, at his casino and figured she would pay this outrageous amount rather than risk the consequences.  However, Clara was enraged and refused to pay more than she though she originally owed, but Daisy wrote the fourth cheque and dragged Clara out of the casino.  They immediately headed back to Hollywood; Daisy dropped Clara off at her house and went straight to the bank to stop payment on the cheques. Two days later Clara was approached by two heavies sent from McKay’s casino. They threatened they would have acid thrown in her face if she didn’t pay the debt.  Clara went to Ben Schulberg of Paramount who then called Los Angeles District Attorney Buron Fitts, a Paramount-owned politician who was good at suppressing scandals involving stars.  The henchmen were arrested for extortion and Schulberg considered the matter closed.  Instead, it became public when McKay announced that Clara had refused to honour her gambling debt and the headline in Hearst’s paper was CLARA BOW A WELCHER.  In 1931, apparently that was worse than calling a woman a “whore”.  Paramount’s publicity department was desperate and agonized about how they could turn the bad publicity around because even though Clara caused them lots of headaches, they loved her more than any other star on the lot.  Finally they decided to make the incident look like a prearranged publicity stunt, and wrote a new scene for No Limit in which Clara’s character refers directly to her Cal-Neva mishap.  Watch for her lines about playing with what she thought were 50 cent pieces which turned out to be $100 chips.  I guess this is what you call Art imitating Life.

All the good and bad, mostly bad, publicity Clara Bow is receiving in that coast mess will be needed, though twice as much couldn’t make this a good picture.  “No Limit,” in talker virtues, is limited,

with only two points in its favor.  One is problematical: how the star will draw.  The other and most certain is Grade A production.  After that, nothing.

Miss Bow seems more improved physically than histrionically this time.  She’s looking better now than ever, but the dramatic actress assignment isn’t her alley.  That places the big fault with the story.

For the first quarter of the way or so, “No Limit” rests on a light comedy foundation.  During that period Miss Bow is almost excellent.  Then and from then on the tears are jerked, to the discomfort of Miss Bow, the film and paying customers.  If the producers insist on Clara continually pulling the 100% pure and demure throughout her pictures while audiences think it’s different on the outside, they’re not doing much to prevent what looms as one of Hollywood’s chief professional catastrophes.  The newspapers are an overpowering contradiction.

“No Limit’s” story is a shop girl’s dream that probably won’t convince even the dreamers.  There is often entertainment quality in the greatest improbabilities, but not in this case.  The yarn about the picture house usherette might have been amusing if not exactly plausible, had the final shift not been so phony in its dramatic way.  The detour from the light comedy path was what harmed Miss Bow the most.

This usherette falls secretly in love with a male patron, but it’s no secret after they meet socially.  She marries him.  He’s a crook.  She discovers that after he pulls a jewel robbery.  She’s implicated when he scrams.  But he returns to save her and reform.  The reformation involves a year in the pen.  All pretty sappy as worked out.

Meanwhile ushy moves into a swell apartment that a sailor’s uncle willed him, plus a car, just as swell.  The apt. was a former gambling joint and when the girl moves in with a girl friend it innocently opens up around them.

The picture, as far as it is anyone’s belongs to Harry Green and Stuart Erwin for their comedy.  Norman Foster is another victim of the sobby circumstances after a time, but he’s a player who travels always with a nonchalance and pleasant manner.  Dixie Lee is the girl friend and a blonde for contrast.

Apartment set is an ideal piece of studio scenic construction.  It’s extremely futuristic, decorative and interesting.  Picture was produced partly in New York and partly on the coast.  Fifth avenue, Central Park and 6th avenue “L” shots take up most of the eastern footage.

In the gambling joint Miss Bow, after losing plenty, pipes that she thought they were 50c chips.  It was a natural laugh and got one at the Paramount.

NO LIMIT, Paramount production and release.  Directed by Frank Tuttle.  Adapted by ViolaBrothersShore and Salisbury Field from a story by George Marion, Jr.  Victor Milner, cameraman.

Clara Bow, less boisterous than usual and all the more effective for her sobriety, may be seen at the Paramount this week in an extravaganza of New York life, called “No Limit,” many of the scenes for

which were photographed here.  This narrative of a poor working girl and her adventures in high gambling society never approaches plausibility, but it emerges as fair entertainment because of the excellent comedy provided by Stuart Erwin and Harry Green.  Mr. Erwin contributes another of his clever comic performances in the role of bashful suitor for Miss Bow’s hand, and the only regret is that a full half of the film has to struggle on without him.

In the course of her work as an usher Bunny O’Day (Miss Bow) finds a cigarette case and immediately falls in love with its owner, Douglas Thayer, played by Norman Foster.  Her befuddled suitor, Ole Oleson (Mr. Erwin), lends her a limousine and a luxurious Park Avenue apartment to which her room-mate from Second Avenue, steps into high society and eventually marries Thayer, not knowing him to be a smooth-working thief and her apartment to be the headquarters of a notorious gambling club.

Matters grow steadily less credible as the film progresses, but when Mr. Erwin is not on the scene to relieve the situation with his faithful-dog expression, Harry Green takes charge as the suspicious manager of the theatre and confidante of the two naïve girls.  Bunny is finally arrested on suspicion of being implicated in a daring jewel robbery at the theatre.  She discovers her husband’s part in the theft and is prepared to sacrifice her own happiness for his.  Thayer, however, gives himself up and goes to prison, while Bunny settles down to await his return.

Norman Foster gives a pleasing performance, and the whole production is as good as the story permits.