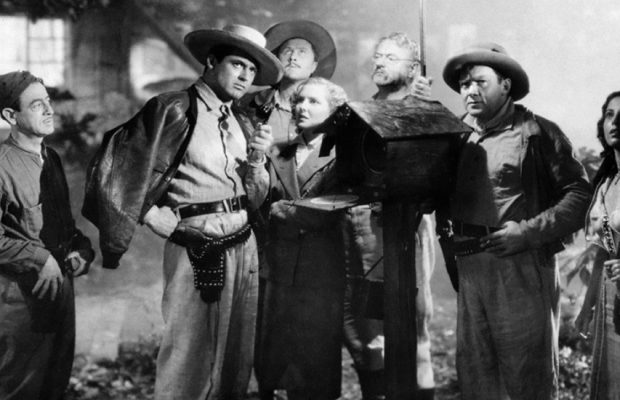 Probably the finest amalgam of the jazz and motion picture arts ever achieved, Jammin’ the Blues was the result of the dedicated determination of Gjon Mili and Norman Granz to avoid the infamous “music short” formula.  Mili was a still photographer of consummate artistry and this training can be seen in his beautiful sense of composition within the frame, his sense for the unusual camera viewpoint, his deep-focus photography and his use of plain backgrounds.  Beyond this, however, he showed a fluid movie technique that makes it regrettable that he did not do more work in this medium.  This is not a movie in which jazzmen appear, it is a genuine amalgam of the two arts.  For example, in the final number the musicians play a riff (a repeated figure) and the film riffs by repeating the image of Edison, then Jacquet.  Again, Mili realized that to capture the characteristic sidewise manner in which Lester Young held his horn, or the soulful concentration of his face in close-up, was more than just photogenic (which it was); it was to capture the man.  Norman Granz was a film editor at MGM, just out of the Army and just beginning his career as a jazz concert promoter.  Probably the only man to become a millionaire out of jazz, Granz was to become a record producer, then owner of a record company empire which he sold to go to Europe and return to his first love, concert promotion.  For this movie he assembled a superb group of musicians, “Prez” Young and Jo Jones (both then in the Army), Harry Edison (from Count Basie’s band), Illinois Jacquet (from Cab Calloway’s band), Barney Kessel (just beginning his career after a stint in Chico Marx’s band), Red Callender and Big Sid Catlett (both leaders of their own groups), and others, and let them play naturally and at their best.  Unlike most jazz heard in movies, this music is representative of the peak playing of these men, with Lester Young’s contributions in particular being of classic stature.  Avant garde music suggests a strident clamouring for attention, but Young, who was then changing the entire course of jazz music, did it with effortless grace.  Jones and Catlett and revolutionized jazz drumming (incidentally, due to the exigencies of dubbing and Jones’s service obligations, Jones is heard whenever Catlett is seen and vice versa) and we are now beginning to realize that “Sweets” Edison did for the trumpet somewhat the same thing as Young did for the reeds.  Prez and Big Sid are dead now and seeing them again brings a kind of sad pleasure.  The music is mostly typical of the jam session (another lost art), a low blues and a fast blues sandwiching “On the Sunny Side of the Street”.  Marie Bryant’s vocal on the latter and the jitter-bugging between her and Archie Savage are the only concessions to “the formula”, but even here her pleasant singing (remember her in They Live by Night?) and the unassuming dancing make them palatable concessions indeed.

There’s really not a great deal to be said about Only Angels Have Wings other than that it’s a thoroughly good entertainment film done with a high degree of professionalism.  That last word is perhaps a key to one element that pre-occupies Hawks in many of his pictures–the theme of a group of men, good at and dedicated to their jobs and intensely loyal to one another.  This theme can be seen in The Dawn Patrol, Ceiling Zero, Rio Bravo, Hatari! and El Dorado–and in Only Angels Have Wings with its tight little band of aviators contriving to keep a “shoestring” mail airline running under trying conditions in a South American port.

It’s not primarily an “action picture”, but has some very well-staged action sequences with skilful special effects.  Most of the footage is concerned with the relationships between the characters, especially those played by Cary Grant, Thomas Mitchell and Sig Rumann.  Considerable sentiment is involved in their exchanges, but it is believable, leavened with engaging humour, and unfailingly masculine.  The feminine angle is introduced with the arrival of a stranded showgirl who becomes attached to the group’s leader (another favourite situation of Hawks’, as with Lauren Bacall in To Have and Have Not and Angie Dickinson in Rio Bravo).  This time it’s Jeanie Arthur, and who could complain?  A subsidiary distaff figure is supplied by Rita Hayworth, whom Columbia was just beginning to publicize as a glamour-girl, after a longish servitude in “B” pix.  As her husband, Richard Barthelmess (once a leading dramatic star in both silent and sound eras) made an impressive if short-lived comeback as a loser who proves himself–a rather meaty supporting role, well suited to his talents, that he must have been happy to get his teeth into, after a period of inactivity.

One of the great pleasures of Hawks’ direction is his seemingly effortless ability to get the best out of all his players, both as individuals and as a team.  Add Jules Furthman’s easy-going dialogue and you have an enjoyable evening’s diversion.