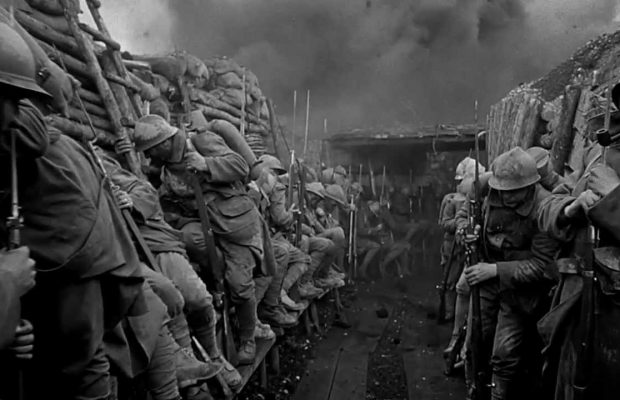 Two years ago TFS showed Kubrick’s The Killing (1956).  It was his third film, but his first to have any studio backing.  It was a slick, at times brilliantly executed crime story which stylistically showed various documentary-like characteristics, but which essentially remains within its genre.  It seems as if it was primarily made to show the studios that Kubrick could be trusted to make a picture on budget.  Apart from the financial returns which were small, it attracted the attention of Kirk Douglas.  This turned out to be crucial to Kubrick’s fourth film project, Paths of Glory (1957), and indeed to his film career thereafter.

At that point in Kirk Douglas’ career, he had a policy of counterbalancing the entertainment films in which he appeared and for which he was well paid with films that aspired to artistic merit beyond simply entertaining.  Cobb’s novel, based on a World War I incident, had been around since 1935, but no one had undertaken to produce it as a film.  While the novel had a potent anti-war message, it had no romantic interest, no comedy relief, and a “real downer” of an ending.  Even at this point it was not really a studio film, it simply got $900,000 backing from a studio,, primarily on the strength of Douglas’ appearance in it for which he received $350,000 of the $900,000 budget.  It was hoped that Douglas’ presence would offset the film’s otherwise limited box office potential.  It didn’t.  That the film was released on Christmas day could not have helped it at the box office.  Even though initially Paths of Glory did not show a profit, the film gradually came to be recognized as one of a small number of films to transcend time  and achieve greatness.

Often when a screenplay is credited to many people, this seems to be a way of diffusing guilt and spreading responsibility for an inferior product.  This is not the case with Paths of Glory.  The screenplay is faithful to the book while not being a direct copy of it.  In fact the material has been structurally modified to completely refocus the narrative and the dialogue has acquired a literary quality for which one may search the novel in vain.  This reworking of the novel corresponds to the considerations elaborated by Kubrick with reference to his work with Nabokov in adapting Lolita (1962).  Kubrick said then that it is the feelings, emotions and thoughts that have to be dramatised, not a particular writer’s style.  “The dramatising has to find a style of its own” (Hollywood Directors, 1977, p.307).  In the case of Paths of Glory that style is one which emerges from the cinematography with its use of long tracking shots; from the crisp editing with its sharp cuts which emphasize the parsimony of the narrative; and from the use of locations in such a way that meticulous set design could not improve.  Kubrick, originally a photographer, uses his photographer’s eye.

Kubrick makes high demands on his audience.  While this quality rewards multiple viewings, some first time viewers may be confused.  Thus, a brief synopsis:

In 1916 the French High Command decides an attack must be mounted against “The Ant Hill”, an almost impregnable German strongpoint.  General Mireu orders Colonel Dax to lead the attack, but Dax’s men, already hard pressed and exhausted, advance only a few yards.  Seeing that some French troops are still in their trenches, Mireau orders his artillery commander to fire on them and becomes hysterical when the officer refuses.  Mireau then persuades Broulard that discipline demands a sacrifice: three men arbitrarily chosen from Dax’s regiment are court-martialled for cowardice.  Dax is not allowed to present the case of his men fairly.  Subsequently Mireau must face an inquiry and Dax is offered his job.  Dax realises that he alone sees the issue as a moral one.  (Monthly Film Bulletin, No. 289, vol. 25, p. 16).

While Paths of Glory has marked anti-war qualities, it transcends the dimensions of propaganda and the easy commentary on the worlds of the leaders and the lead to capture the ultimate quality of evil, which is its banality.  General Mireau is not what you usually expect of an evil man.  There is some ruthlessness beneath Broulard’s manners but there is in his decisions the same mediocrity one finds in the inept and cowardly Lieut. Roget, simply at a higher level of command.  They are petty men operating within a bureaucracy which they do not question.  The anti-military and anti-war message of Paths of Glory transcends the national garb it wears.