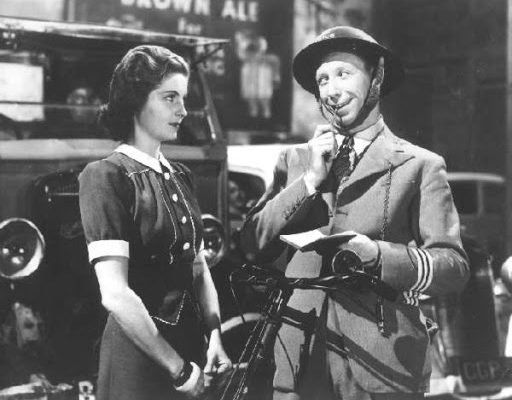 Toronto Film Society presented Spare a Copper (1940) on Monday, January 30, 1989 in a double bill with Make Mine Mink as part of the Season 41 Monday Evening Film Buffs Series “C”, Programme 4.

It’s time for the 3rd annual meeting of the “George Formby Fan Club–TFS Division”.  Once again, due to the requests of members, we are happy to be able to present another of the now seldom-seen films of the “Lancashire lad”, who was one of the top film stars of British cinema during the 1930’s and 1940’s.  (And, the vaults hold even more of the Formby films for another year, if the demand is there).

The film this year is from the mid-career of Formby in films…a career which began with films such as On the Dole in 1935, and extended until the mid-40’s with George in Civy Street.

In Spare a Copper, we find the action centered around a shipyard, where a gang is out to sabotage the new battleship “Hercules”.  George Carter (George Formby) is a War Reserve policeman, but,, as is the norm in a Formby film, is in deep trouble with his own people–the police–because they think he is a member of the gang.  Justice (and George) will triumph in the end, but on the way there are the usual outpourings of mayhem and slap-stick which characterized the Formby films.

As we mentioned in our notes from the last year’s Formby film, I See Ice, the 1930’s and 1940’s in British film comedy were, for the most part, dominated by the Lancashire Lass (Gracie Fields), and the Lancashire Lad (George Formby).  The toothy, ukelele-strumming (and it was a uke not a banjo) songman, comedian, vaudeville and motion picture star.

Formby was born in 1904 in Wigna, and honed his skills in the Music Halls, and in radio performances.  His father, George Sr., was a much-loved music hall performer, who was known as “The Wigan Nightingale”.  Not unlike Gracie, George never forgot his early days (or his accent), and many of his best known songs are Lancashire-oriented.  His record list numbers just under 200, most with lyrics that were suggestive for the day.

His first actual film appearance was in a silent film when he was 11.  But the real film career began in the mid-1930’s with Boots, Boots and Off the Dole.  They were not much more than a transfer of the music hall routines to film.  They were cheaply produced, but were immensely popular in the small towns, and brought Formby to the attention of Basil Dean, the chief of production at Ealing Studios.  The first of the 11 Formby films for Ealing was No Limit (1935), an immediate success.  By 1937, he was second only to Gracie as a box-office attraction, and became the cinema king in the period 1938-1943.

During the war, Formby was a tireless tourer for the troops, and was awarded the OBE in 1946.

There is an interesting, and mainly unexplained comment on Formby and Fields by Roy Armes in “A Critical History of British Cinema”.  He notes that as the 1930’s moved along, two quite distinct British cinemas evolved.  One was the Prestig Productions with literary pretensions and usually international casts, which usually failed in the American market and lost money.  The second was the commercially successful but generally despised comedies aimed primarily at the home market (Formby, Fields, Will Hay).  Comparing Formby and Fields, Armes notes: “The stars themselves were totally dissimilar in personality, and a wide gulf existed between Gracie Fields with her expansive nature and genuine sense of fun, and George Formby, whoses permanent grin was as (producer Basil Dearden) Dean point out ‘part of a professional image, not an expression of warmth’.  However, they both shared a keen awareness of box office value.” 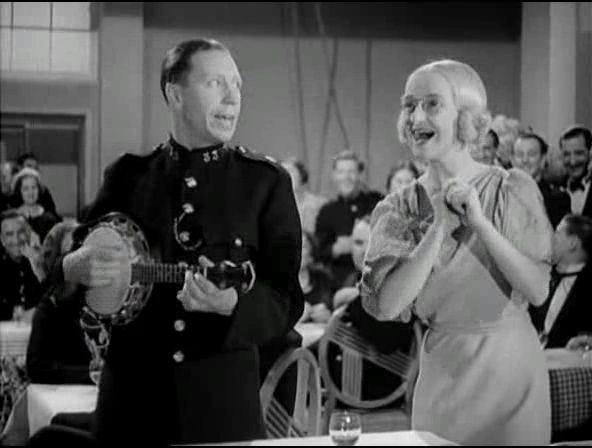 Dorothy Hyson, one of many attractive “ladies” in Formby films, was born in 1915, and was a fairly busy actress through the 1930’s.  She was also an active performer on the London stage.  Her first recorded film performance is Soldiers of the King (1933), and she appears to have retired after You Will Remember (1940).  This was her only appearance in a Formby film.  She appeared once as well with Gracie Fields in Sing As We Go (1934).

Bernard Lee, who became well known in the 1970’s for his role as “M” in the James Bond films, appeared in two Formby films, Spare a Copper and Let George Do It (1940).  He began a lengthy stage career at the age of six and entered the film world in 1934, with many memorable performances, quite often as a police inspector or military officer.

Director John Paddy Carstairs was born in London in 1910, and entered films in 1928 as an assistant cameraman.  He turned to screenwriting in 1931 and became a director in 1934.  He turned out many films and TV episodes, most of them in a light vein.  He was also a writer of many humourous novels, and his paintings have been exhibited internationally.  Some of his other notable directorial efforts included Tony Draws a Horse (1950), Up In the World (1956) with Norman Wisdom, and A Weekend With Lulu (1961).  He died in 1970.