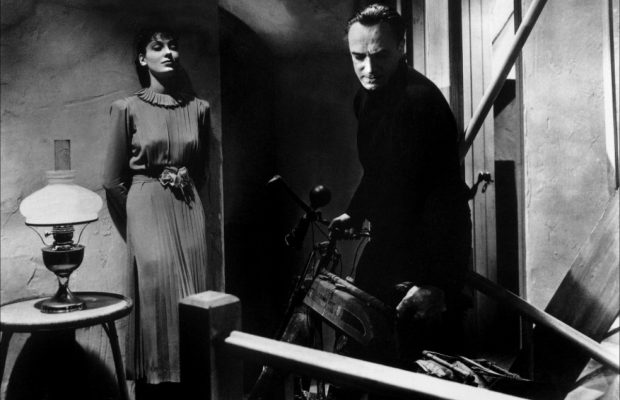 Toronto Film Society presented The Spy in Black (1939) on Sunday, September 25, 2016 in a double bill with Seven Days to Noon as part of the Season 69 Sunday Afternoon Film Buff Series, Programme 1.

One of the interesting aspect of tonight’s two films is that each were collaborated on by a famous duo.

The Spy in Black was the first film to join the talents of Michael Powell and Emeric Pressburger.  Powell directed while Pressburger wrote the screenplay.  This collaboration led to a satisfying partnership with both men acting as writers and directors on many of their films together.

While The Spy in Black’s dramatic milieu is ostensibly laid in World War I in Scotland, the drama which enthralled its audiences was very much grounded in a more current war.  The picture dared to suggest that an enemy could still demonstrate honor, understanding and mercy, a concept that normally went begging in motion pictures of wartime theme or vintage.  From a propaganda standpoint, the portrayal of Hardt (Conrad Veidt’s character) as a decent, rational man (he poignantly excludes a babe in arms from a threat to shoot uncooperative bystanders; he allows civilians to abandon the sinking ship before soldiers of either nationality; he elects to go to the bottom with the vessel that has become his) may have assuaged fears among the populace that contact with the Germans could lead only to a grisly and barbaric fate.

For his first project at Alexander Korda’s London Films, Michael Powell was introduced to young Hungarian screenwriter Emeric Pressburger for this World War I drama.  The pairing was a propitious one—The Spy in Black was a hit both in England and in the US (under the name of U-Boat 29), and one of the most successful partnerships in British cinema was born.

Released on the eve’ of World War II, in August,1939, The Spy in Black makes an interesting contrast with the later 49th Parallel (1941), made as an unambiguous propaganda film.  Although both feature a U-boat commander as a villain, Captain Hardt (Conrad Veidt) is a very different character to his counterpart in 49th Parallel, Lieut. Hirth (Eric Portman).  The film goes to some lengths to humanise him in the early part of the film, showing his easy friendship with his colleague Schuster (Marius Goring), and he is altogether a more honourable German.

Filmed in the Orkneys, The Spy in Black marked Powell’s second visit to the Scottish islands, following his breakthrough film Edge of the World (1937).  He was completely in love with their bleak beauty, and was back again a few years later, to film I Know Where I’m Going! (1945).

By now, Powell was almost a veteran—Spy was his twenty-sixth film as a director—but this was his first major project, and the light touch and confidence he displayed is surprising.  Notably, the minor characters are rounded, believable, and treated with respect; quite different from the crude caricatures common to British films of the period, and a step forward from the more stereotyped Welsh villagers in Powell’s earlier The Phantom Light (1935).

In one particularly impressive sequence, in which Hardt makes his way past patrolling guards to establish contact with the “schoolmistress” whom he believes to be his ally, Powell showed a rare ability to blend humour and suspense, a gift most commonly associated with Hitchcock, whose position as undisputed master of British cinema was now vacant, following his departure for Hollywood.

The starstruck Powell and Pressburger were thrilled to be working with a hero of the German Cinema, Conrad Veidt, star of the expressionistic classic The Cabinet of Dr. Caligari (1919).  After the success of The Spy in Black, they collaborated again with Veidt (and Valerie Hobson) on the low-budget thriller Contraband (1940).