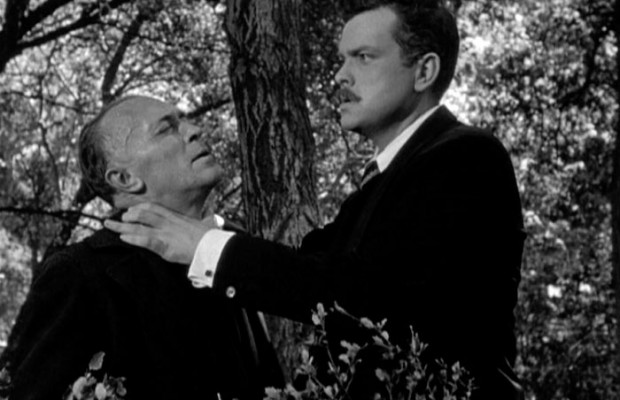 Toronto Film Society presented The Stranger (1946) on Monday, January 5, 1981 in a double bill with The Imperfect Lady as part of the Season 33 Monday Evening Film Buff Series, Programme 5.

The Stranger is, in some respects, a case of one directorial giant borrowing from the work of another–no less than Alfred Hitchcock.

The film tells the story of a psychotic Nazi war criminal (Welles), hiding out in peaceful Connecticut, meeting a sweet, rather naïve woman (Young), and, ultimately, being tracked down by a government investigator (Robinson).

Sound familiar?  In 1942, Hitchcock filmed his classic Shadow of a Doubt, the tory of a murderer (Joseph Cotton) seeking refuge at his sister’s house in a picturesque small town.  Gradually, his niece (Teresa Wright) suspects, to her peril, what her uncle–outwardly a jovial, sophisticated man–really is.

Welles used many of the elements from Hitchcock’s film–the sharply observed vignettes of small-town life the atmosphere of menace and death in bright, cheerful surroundings; right down to a dinner table scene where Welles breaks into a psychotic monologue, as Cotton did.

Many of the scenes are typical of Welles–the long tracking shot of a murder in the woods, as a group of boys play near by; the intimate probing of the drugstore interior; the constant ironies; the use of newsreel footage; the climax atop the clock tower–which, incidentally, was shot entirely atop the 124-foot tower, to ensure realism.

Welles’ performance is ideal: he makes convincing the character’s intelligence and attractiveness, yet he can also suggest from the first the feeling of a hunted man.  The body may be well, fed and comfortable-looking, the posture relaxed and assured, but the eyes are brilliant with cruelty and distress.  Like Uncle Charlie in Shadow of a Doubt, he charms the ladies at a sorority and flatters the townspeople.

Loretta Young’s Mary Rankin is a portrait of practical American goodness, decency and strength.  She braves the successive disclosures of her husband’s guilt with considerable fortitude; only her subconscious mind fights to release its pain.  Her reality becomes a nightmare, and everything she has taken for granted–security, a husband’s love, the security of America itself–is eroded away.

As the investigator, Edward G. Robinson gives one of his more subdued performances (the role was originally intended for Agnes Moorehead).  Quietly asking questions, pondering answers, Robinson plays his part with his characteristically dry humour, in contrast to Welles’ occasional flamboyance.

Although not a typical Welles film, The Strangercontains several characteristics of this brilliant if erratic director’s technique–particularly his recurring depiction of how a certain kind of American innocence can vanish like the snow from the Rosebud sled.