Toronto Film Society presented The Canterville Ghost (1943) on Sunday, September 29, 1985 in a double bill with Blithe Spirit as part of the Season 38 Sunday Afternoon Film Buffs Series “A”, Programme 1.

The Canterville Ghost was released in July of 1944, at a time when theatres were giving the public the mixture of hard-line war-time propaganda films, glimpses at favourite radio stars (Gildersleeve, Henry Aldrich, etc.), the glitter of never-never land musicals, and the fright of Lon Chaney in such vehicles as The Mummy’s Ghost.

And, here was a mixture of at least two of these-the fright and the fun.  Charles Laughton is at his outrageous best as the cowardly “Sir Simon”, sealed up in the walls of the castle in 1604 and doomed to haunting until some derring-do descendant set him free (sort of an ugly Sleeping Beauty, if you will).

And, in a time of war, what better person to liberate this ghostly figure than a man in uniform.  Add in the childish sweetness of Margaret O’Brien as Lady de Canterville, and you come up with a picture about a ghost that “like other shadows has its manifest ups and downs”, according to one reviewer.

Charles Laughton spent 36 years before the public in a variety f costumes and disguises, but beneath all the makeup was to all who watched…Charles Laughton.  In many of the 52 features in which he acted, he was often accused of “hamming” his way through the role, to the detriment of believability, and maybe in The Canterville Ghost, the statement can be made.  But, many feel the treat was to have fun WITH Laughton…not to find ways to pick him apart…and with his size, that would be a rather large picking job.

He well deserves the tab of an “all round man of the theatre”.  His stage career began in 1926, when at the age of 27 he began to study at the Royal Academy of Dramatic Arts in London.  His face and figure, which began as a handicap, eventually became the key to his success. 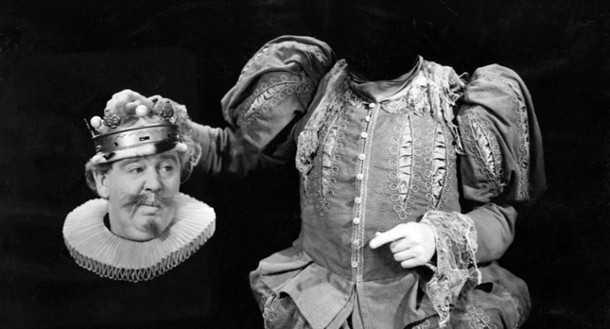 His screen career in feature films began with a 45 second part in Britain’s last large-scale silent picture Picadilly, where he played a diner who caused an uproar in a nightclub, but brought him to the eyes of the critics.  His first foray into “talkies” came with Dorothy Gish in what is generally regarded as a terrible piece of fluff called Wolves.  It was then back to the stage, until the call came in 1931, and, on a loan-out from Paramount to Universal, he played a minor part in James Whale’s The Old Dark House.  A string of roles with varying success followed…but great success followed when he played the title role in Alexander Korda’s The Private Life of Henry VIII.  From the Academy Award nominated role of Captain Bligh in Mutiny on the Bounty (1935), through Rembrandt, The Hunchback of Notre Dame, Arch of Triumph, Man on the Eiffel Tower, and forward to films such as Hobson’s Choice (1953), the myriad of performances continued.  His last role was as Seab Cooley, the Southern Senator in Otto Preminger’s Advice and Consent.  In June of 1962 he entered hospital for treatment of cancer…and died in December of that year.

Margaret O’Brien’s arrival on the movie scene was tied in with her real-life movements, as she arrived int he United States as a war-time migrant.  In 1942, she drew rave reviews for what was termed not really a performance, but a portrayal of her real life situation in a seldom-seen MGM film Journey For Margaret, directed by W.S. Van Dyke.  It told the story of children left homeless by the bombing.  Here, too, she was teamed with Robert Young, as her adopted father.  The film drew rave reviews.  During the war years, she was seen in what is regarded as one of the classic “war effort” shorts produced by the motion picture industry, You, John Jones, with James Cagney and Ann Southern, and the star-spangled MGM musical Thousands Cheer.  Other credits include Madame Curie (1943), Jane Eyre (1944), Meet Me in St. Louis (1944), Our Vines Have Tender Grapes (1945), Unfinished Dance (1947), Little Women (1949), and Heller in Pink Tights (1960).

Director Jules Dassin, born in Connecticut in 1911, has had a checkered career.  He wrote scripts for radio, directed a Broadway failure (The Medicine Show–1939), then worked briefly with RKO.  He moved to MGM as a director of shorts, and what is generally regarded as his best “The Tell-Tale Heart”, earned him work on features.  He directed seven for that company, ran into differences of opinion with the MGM hierarchy, and left to work in Europe.  Other films of note by Dassin included Rififi (1956), He Who Must Die (1957), the oft-praised Never on Sunday (1960) and Phaedra (1962).

He was accused of Communist leanings, and was black-listed for a time.  Two years ago TFS screened Dassin’s Up Tight (1968), the black-ghetto version of The Informer.  It was critically-acclaimed, but ignored or abhorred by movie-goers.  For a man who has been surrounded in “heavy” topics on the screen, and turmoil in his off-screen activities, the antics of Charles Laughton and Margaret O’Brien may seem a rather tame exercise to direct.  But it seems to show that even Dassin at times can have fun, and make an enjoyable, if unimportant film record of it.