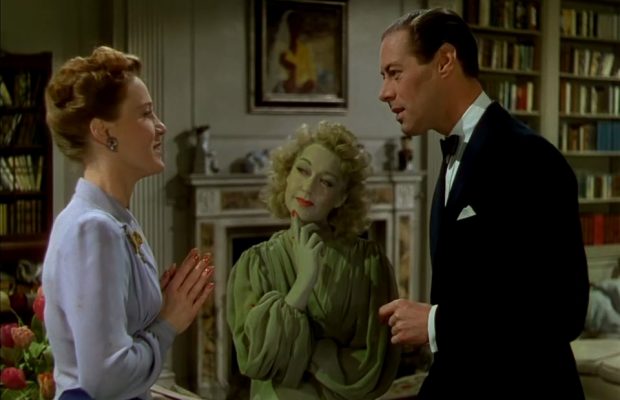 Toronto Film Society presented Blithe Spirit (1945) on Sunday, September 29, 1985 in a double bill with The Canterville Ghost as part of the Season 38 Sunday Afternoon Film Buffs Series “A”, Programme 1.

Blithe Spirit is the third of four films which saw the combination of Noel Coward plays, directed by David Lean.  The union began with In Which We Serve (1942), This Happy Breed (1944), today’s offering (1945), and finally, Brief Encounter (1945).

Blithe Spirit is generally regarded as the most successful of the quartette, the least important in content, yet the most entertaining.  In a page out of the Thorne Smith “Topper” novels, we are introduced to the first of our two “ghostly guests” this afternoon, the first wife of novelist Charles Condomine (Rex Harrison), accidentally conjured up in a private seance.  Kay Hammond is described as “lively and rather on the mischievous side”, by the New York Times reviewer of 1945.  The medium responsible for the unwanted vision is the eccentric Madame Arcati (Margaret Rutherford), a dinner guest of the now re-married novelist who is researching spiritualism for a new book.  With Condomine the only one able to see or hear the visitor from beyond, suspicions about his sanity soon mount. 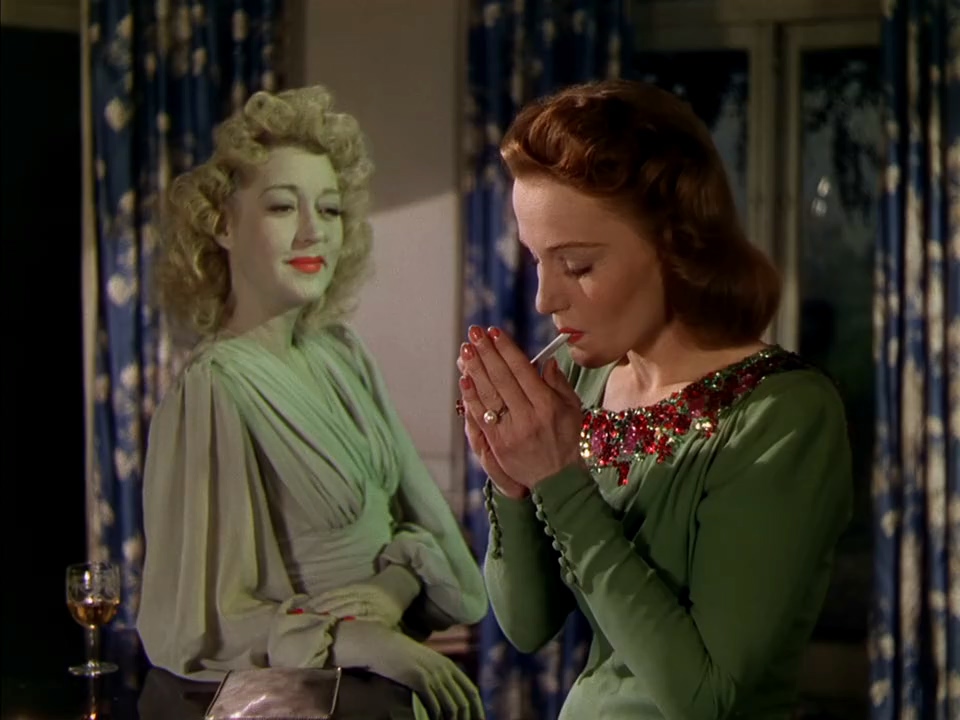 The performances are exactly what one would expect from the performers involved.  Harrison uses his effortless urbanity, and used this performance as a spring-board to his subsequent North American popularity.  Kay Hammond repeats the role she had originated in the West End theatrical original, and the production affords the opportunity to watch Margaret Rutherford in one of her truly classic performances…probably the definitive Margaret Rutherford role.

Some other fine actresses have tried…Beatrice Lillie in the 1960 musical adaptation High Spirits, and two American television versions, with Mildred Natwick and Ruth Gordon, but all fell far short.

The Technicolor photography by Ronald Neame is expertly executed, and adds to the fun of the affair, especially in the supernatural sequences.

Coward himself described Blithe Spirit as “an improbably farce”, but it was just another example of the versatility of the man who could range from the semi-documentary realism of In While We Serve, through the accurate observation of middle-class lives in This Happy Breed, to the witty, light-hearted whimsy of Blithe Spirit.

Director David Lean started his career on a rather unusual note, carrying tea for Directors at Gainsborough Studios at the age of 19, in the waning days of silent cinema.  He earned an outstanding reputation as a film editor in the 1930’s and early 1940’s.  This resulted in Noel Coward offering him co-direction with Carol Reed on Coward’s first feature In Which We Serve.  After the long apprenticeship with Coward, Lean moved on to continue his reputation as a “literary director”, adapting two novels by Charles Dickens, Great Expectations (1946) and Oliver Twist (1948) to critical acclaim.  He moved into less well received productions in the early 1950’s, then peaked again in 1957 with Bridge on the River Kwai, the first of his “super productions”.  They were followed by the multi-million dollar productions including Lawrence of Arabia (1962), Doctor Zhivago (1965) and Ryans’ Daughter (1970).  The productions became bigger, but many critics felt the uniqueness of Lean’s work declined.