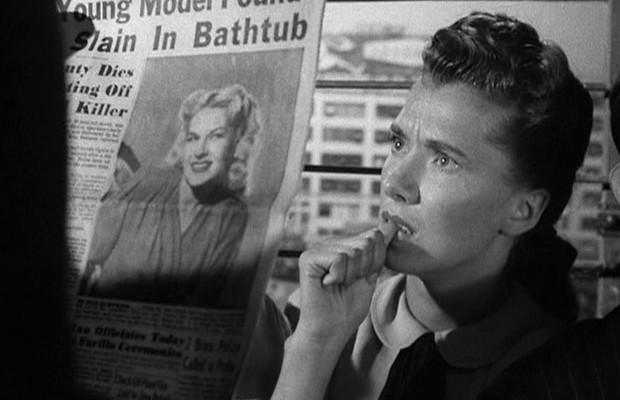 Toronto Film Society presented The Naked City (1948) on Monday, July 13, 2015 in a double bill with Dead End as part of the Season 68 Monday Summer Series, Programme 2.

Veteran homicide detective Dan Muldoon and his young associate Jimmy Halloran are assigned to the investigation of the murder of a young ex-model, Jean Dexter, who was drugged by two men and drowned in her bathtub. Her death is thought at first to be suicide, but is then recognised as murder. The investigation dredges up a variety of seamy and deceitful characters who all seem to have some connection with a string of apartment burglaries, before the truth is discovered.

The film, like many other Hollywood movies in the post-World War period, is heavily indebted to Italian neorealist cinema in its use of location filming and non-professional actors. Much of its action, including the climactic car chase, was filmed on New York streets and its visual style has been said to be inspired by the New York photographer Weegee, who published a book of photographs of New York titled Naked City in 1945.

Bosley Crowther of the New York Times while having problems with the script, liked the location shooting and wrote: “Thanks to the actuality shooting of much of its action in New York, a definite parochial fascination is liberally assured all the way and the seams in a none-too-good whodunnit are rather cleverly concealed. And thanks to a final, cops-and-robbers chase through East Side Manhattan and on the Williamsburg Bridge, a generally talkative mystery story is whipped up to a roaring ‘Hitchcock’ end.”

More recently, Jonathan Rosenbaum called it “a first-rate police thriller” and the internet critic Emmanuel Levy classed it as “One of Jules Dassin’s best features, a quintessential film noir, distinguished by its on location shooting and Daniels’ sharp imagery which deservedly won the Oscar.” And another internet critic praised it for its presentation of the city–“always elegantly shot whether in the rich or poor neighbourhoods and its mysterious nature is treated with bountiful affection in this simplistic narrative–there are god guys and bad guys with no gray in-between.”

Often thought, because of his name, to be French, he was in fact American, born in Connecticut, of a Russian-Jewish family, and grew up in Harlem. He became an actor with a Yiddish theatre in 1934 and joined the Communist party, but left it in 1939. He moved to Hollywood in 1940 and made some of his best films in the late 1940s–Brute Force in 1947, The Naked City in 1948 and (in London) Night and the City. He was then accused of Communist sympathies by the House Un-American Committee in 1951 and film Riffi (1955) was a huge success. He followed this with He Who Must Die, based on a work by the Greek writer Nicos Kosantzakis, in 1957, and met the Greek actress Melina Mercouri, with whom his life was linked afterwards. The couple made a successful comedy, Never on Sunday, in 1960, and another heist film, Topkapi (1964), shot in Turkey, but made for an American company now that Dassin’s political sins had been forgiven. His final film, Circle of Two (1980) was made in Canada.

Born in Dublin as William Joseph Shields, he joined the famous Abbey Theatre in 1915 as an extra before becoming full time in 1929. John Ford invited him to Hollywood to repeat his stage role in his film of The Plough and the Stars and he remained in America, working again with Ford on The Long Voyage Home, How Green Was My Valley and The Quiet Man. He received an Academy Award for his role in Going My Way in 1944 and appeared in many other films, in which he laid on the “Oirish” blarney thickly and successfully.

He had a fifty year career as a cinematographer, starting in 1922 with Erich von Stroheim’s Foolish Wives and became Greta Garbo’s favourite cameraman, working on 21 of her films between 1926 and 1939; but his only Oscar came for The Naked City in 1948.

He was expelled from school for organizing a student strike at the age of 15 and this ended his formal education. After working as a waiter he turned to journalism, working first for the New York Daily News and then the New York Daily Mirror with considerable success. He also wrote plays, short stories and screenplays and became a Hollywood producer whose credits included They Drive By Night, High Sierra and Brute Force. He wrote and narrated the introduction to The Naked City, which was not released till several weeks after his death from heart failure.

A playwright, novelist and short story writer who worked at a time for the Theater Union, a left-wing and pro-Communist organization in the 1930s. He was blacklisted and jailed in 1950 as one of the “Hollywood Ten” who refused to testify before HUAC (see under Dassin) and was unable to work openly in film till 1970, when Don Siegel hired him for Two Mules for Sister Sara. His screenplay for Broken Arrow (1951) won an award from the Writers Guild of America, but, because of his blacklisting, could not be credited under his name and had to be listed under another writer. He received proper credit only in 1991, after his death.