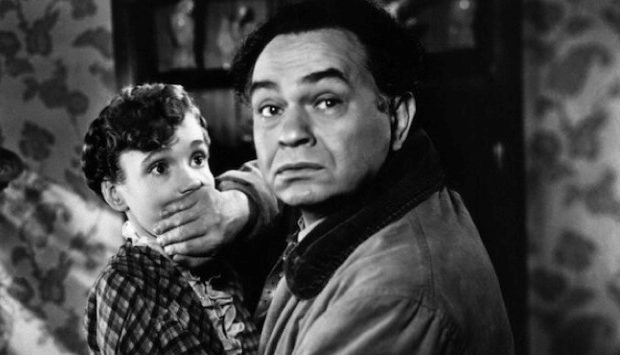 Toronto Film Society presented The Red House (1947) on Saturday, May 1, 2021 as part of the Season 73 Film Buffs Screening Series, Programme 2. 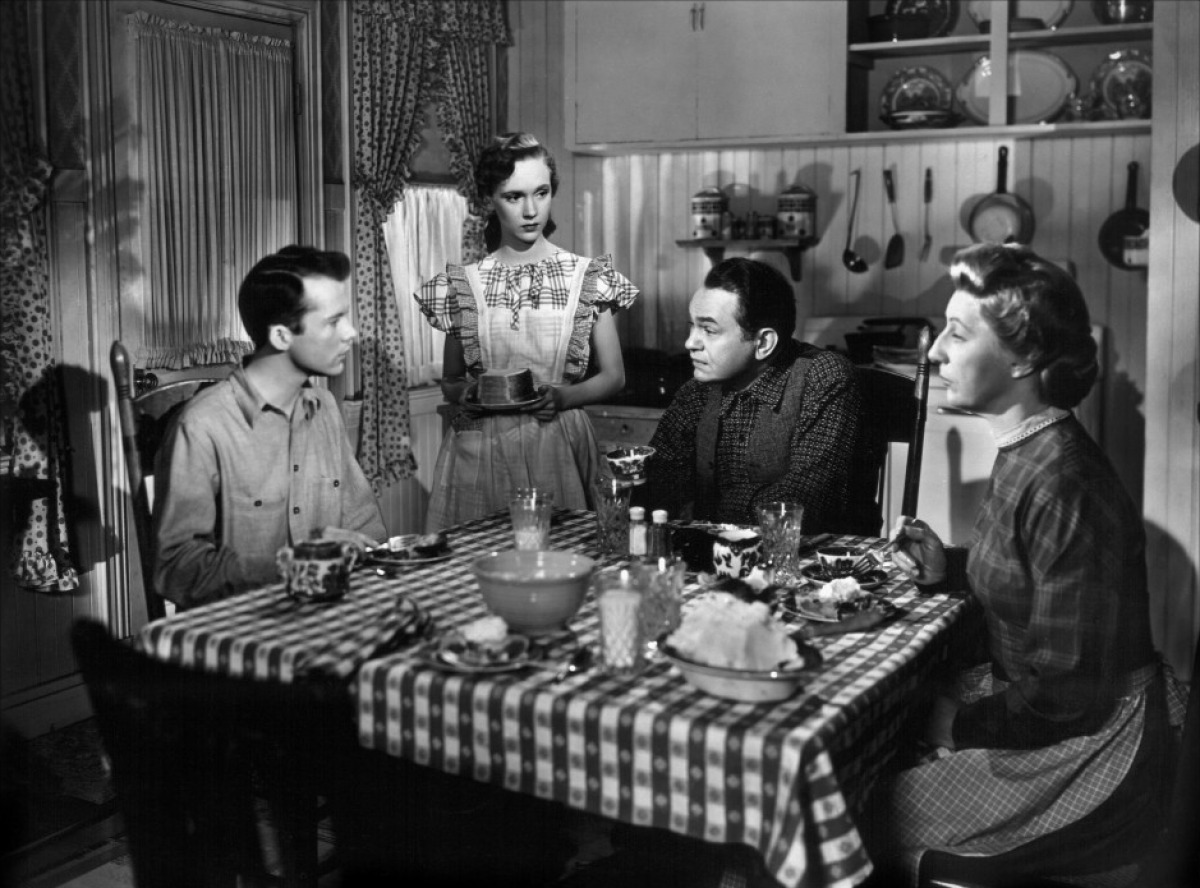 An under-appreciated psychological thriller, The Red House starred silver screen legend, Edward G. Robinson.  Already in his 50s, Robinson played the deeply troubled lead, Peter Morgan, who stoically maintains the family farm with his sister Ellen, played by Judith Anderson, and his adopted daughter Meg, played by Allene Roberts.  Finding his age and disability starting to creep up, Peter is convinced by his sister and daughter to hire extra help for around the farm. In comes Meg’s classmate, Nath Storm, played by Lon McCallister; it’s clear early on that Meg has a crush on boy-next-door, Nath. But Nath has a girlfriend: fiendishly manipulative and petulant Tibby, played by Julie London.

It’s known around town that Peter Morgan likes to keep to himself, and keep his idyllic farm life private from outsiders.  Peter and his sister also have their secrets, kept hidden in the woods adjacent to the farm; Peter will do anything to keep people out, even hiring local bad boy Teller, played by Rory Calhoun, and giving him hunting rights in return.  But Meg is growing up while Peter and his sister are growing old; secrets can’t be kept forever…

Unlike its colourful title, The Red House was filmed in black and white, giving the scenes an oppressive, moody feel, typical of film noir; an eerie Theremin score, composed by Academy Award winner Miklos Rózsa (1907-1995), was described by one movie critic as “appropriately macabre.” Rózsa started his career composing movie scores for fellow Hungarian immigrant, Alexander Korda, and went on to score films for Billy Wilder, George Cukor and Alfred Hitchcock, to name a few. In a career that spanned more than seventy years, Rózsa’s work received many Academy nominations; he won Academy Awards for his music in Spellbound (1945), A Double Life (1947), and Ben-Hur (1959).

Written and directed by Delmer Daves (1904-1977), The Red House was produced by Sol Lesser Productions and Edward G. Robinson’s company, Thaila Productions. Sol Lesser and Robinson had been longtime business partners in the movie industry. On its release, The Red House was considered by critics to be a ‘sleeper’ and received positive reviews. During a time when most horror films were comic B-flicks for young movie-goers, such as the Bowery Boys’ Spook Busters (1946) and Strangler of the Swamp (1946), The Red House, like The Spiral Staircase released in the same year, was an exception to that trend. It was considered a gothic horror film made for mature viewers; a 1947 New York Times article called it an “horror for adults.”

Judith Anderson (1897-1992) played Peter Morgan’s long-suffering sister who sacrificed her chance at happiness for her brother. Made a Dame Commander of the Order of the British Empire (DBE) in 1960, Anderson was originally from Australia and had a successful movie, stage and television career. She was nominated for a Best Supporting Actress Academy Award for her portrayal of the sinister housekeeper, Mrs. Danvers, in Alfred Hitchcock’s Rebecca (1940). Any Trekkies out there may recognize Anderson as the Vulcan High Priestess T’Lar in Star Trek III: The Search for Spock.

Note the contrast in the juvenile leads in this film. Allene Roberts plays an innocent, rather plain, young Meg, versus Julie London’s portrayal of Tibby, Nath’s vamp-like girlfriend. The fair-haired and diminutive (he was all of 5’6”) Lon McCallister played the schoolboy Nath versus the dark, menacing Teller, played by 6’3” Rory Calhoun who, decidedly, had the best hair in Hollywood! The tall, dark and handsome Calhoun enjoyed a lengthy career in the movies, as an actor, screenwriter and producer. Many will remember his roles in a string of Westerns in the ‘50s and ‘60s, and of course, who can forget that hair!

Julie London was sensual in her portrayal of the dark, manipulative Tibby. It’s no surprise that, in addition to a successful acting career, London was also known as a torch singer noted for her sultry, languid contralto vocals. She recorded thirty-two albums, and had a number of well-known hits. You must listen to her sing “Cry Me a River” on YouTube. For those of us who remember televisions with dials, Julie London was our favourite emergency-room nurse, Dixie McCall, in the TV series Emergency!

Although his height and boyish looks made mature roles a hard fit, Lon McCallister had a lengthy career (1936 to 1963). He had been in more than thirty films, mostly uncredited roles, by the time he starred in The Red House. His career took off in 1944 when he played the lead, Sparke, in the horse-racing tale Home in Indiana, and then Frankie in the Winged Victory. He and actor William Eythe (handsome but not very successful) had an off-and-on romantic relationship which caused some talk; it resulted in a hasty marriage by Eythe to socialite and Fox starlet Buff Cobb in 1947. By 1953, McCallister retired from acting for more lucrative ventures in real estate and property investments. In a biography, it was reported that McCallister was with Eythe up until Eythe’s untimely death in 1957 at the age of 38.

Of these young players, Allene Roberts had the shortest career; The Red House was her first film. By 1957, she ended her career after marrying. Originally from Alabama, Roberts married and later returned to Alabama with her husband, a pharmaceutical employee, where they raised their four children.