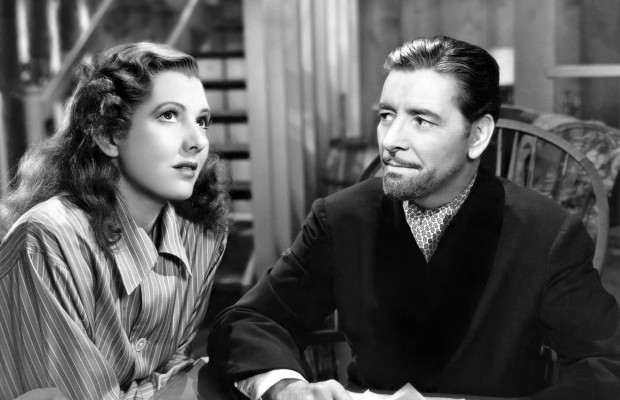 Toronto Film Society presented The Talk of the Town (1942) on Monday, October 17, 1977 in a double bill with Friends and Lovers as part of the Season 30 Monday Evening Film Buff Series, Programme 1.

In Columbia’s The Talk of the Town Producer-Director George Stevens successfully manages the ticklish chore of tucking in such strange bedfellows as zany comedy and social significance, rampart melodrama and quiet humor.

With Jean Arthur cast as Nora Shelley, a small-town Massachusetts schoolteacher, it was inevitable that any profound questions raised by the authors would resolve into the more basic problem of who marries Nora.  The candidates for that honor are Prof. Michael Lightcap and one Leopold Dilg.  Dilg is a philosophical mill hand whose predilection for the soapbox lands him in jail on a trumped-up charge of arson and murder.  Lightcap is a dean of law and leading aspirant to the Supreme Court of the United States–a bearded bachelor, old beyond his years, who has rented Nora’s country home expecting to spend a quiet summer writing a book.

But you can’t make a movie out of a quiet literary summer.  Nora livens it up by impulsively hiding the escaped Dilg in the professor’s attic, then foisting herself on Lightcap as secretary-of-all-work.  What happens to Lightcap after that shouldn’t happen to one of the Nine Old Men–and undoubtedly never has.  From here on the film owes much to the expert playing of the three co-stars.  Miss Arthur and Grant have had more rewarding roles but play these with their customary finesse.  Colman, getting the best break, is completely persuasive as the pedant who learns that the legalistic approach is cold comfort when justice cries for action.

The Sidney Buchman-Irwin Shaw screen play is well turned and witty and at its best when it sticks to the middle ground between farce and melodrama.  The chief fault of the script is its excessive length and the fact that a standard lynching-mob climax is followed by a prolonged anticlimax in which Nora decides between judicial robe and denim.  As a matter of fact, Nora is hardly the captain of her soul in this matter.  George Stevens cautiously tagged the film with two endings, and the voting of several preview audiences picked her groom.

Only sourpusses and unbending esthetes aren’t thankful for screwball comedies.  At their best these comedies have more actual invention in situation and character and more turbulence and energy than nine-tenths of the seriously intended, pretentious movies.  The recipe was invented by director Frank Capra and writer Robert Riskin in 1934, and it fails only when it isn’t followed.  In screwballs, relentless common sense is imposed on a lunatic situation which has come out of and continues to operate in a realistic American atmosphere.  The comedy depends on someone like Jean Arthur, who sums up in her person all the characteristics of these movies: she is both an ordinary girl with ordinary reactions and a scatterbrain who wears birds’ nests on her head and at normal times is out of breath from running or screaming or hitting someone on the chin.  No one less cockeyed than Jean could negotiate the situation that makes you laugh.  She serves also as stooge to the smart cracks of the hero, and this is what the hero is for–smart cracks.  When Gary Cooper or Henry Fonda plays the Jean Arthur role, the girl supplies the bright banter.  The main thing is the gag and the laugh, and the butt is always conventional living.  But the social criticism is only a foil for laughs, except in Frank Capra’s worst moments, when preaching takes seriously Christmas-card sentiments.  Screwballs magically please and criticize in one picture everybody, from tory to radical, the people who laugh most at prat-falls and those who laugh most at Noel Coward.  They are apt to have a high level of invention in characterization and observation of contemporary life.  And in any case they are a triumph of the gag-writing art.

Talk of the Town, the latest example, is in between the best and the worst, but follows the formula closely enough to be good.  One reason is that Jean Arthur is in it, not only to talk through her nose but to hide Leopold Dilg from the police.  Eventually, with the help of a Supreme Court Justice, she saves Dilg from being lynched.  Unfortunately, I found it hard to believe in Cary Grant as a soap-box orator and impossible to take Colman for Felix Frankfurter.

The playing, then, in all the main cases, is more stereotyped than fitting; but the big blanks that this draws are the long waits in between laughs and action, when Dilg and Judge become involved in the interpretation of the law.  Director George Stevens directs, and not for the first time, at a pace which is more thorough than funy and shows his usual predilection for sentimentality.  For some reason, the regard of Colman’s valet for his master and the fondness between Colman and Grant turn out to be a little morbid.  And somehow I can’t take my lynchings so lightly, even in a screwball.  Still, I am all for this kind of comedy, for reason noted earlier, and for players like Arthur and Grant, who can mug more amusingly than most scrip writers can write.

The New Republic by Manny Farber

It is more than a passing coincidence that Columbia Pictures, which made Mr. Deeds Goes to Town, is also the company responsible for The Talk of the Town. For there are several nice points of similarity between the two remote comedies, not least of which is the fact that they both entertain delightfully.  Leopold Dilig, the cause celebre of The Talk of the Town, may not be quite as respectably “pixillated” as was Longfellow Deeds of the former film, and certainly his periolous dilemma is not so funny as was his predecessor’s.  But both boys have in common the unmerited scorn of society; both have to put up a battle against intolerance and hypocrisy, and both have the obvious advantage of Jean Arthur in their corners.

Thus, there is ample reason to be almost as thoroughly pleased with the manner of Leopold Dilg’s salvation as we were with that of Longfellow Deeds.  Almost–but not quite.  The one hitch is that Leopold’s case becomes confused by some dubious disputation over the letter versus the spirit of the law.  And the logic of Leopold’s contention that an innocent man, falsely accused, has the right to become anarchistic is a bit too obscurely professed.  The sole weakness of this picture is that it never presents a clear brief.

But that is a point we won’t labor, for the essential purpose of this tale is to amuse with some devious dilemmas, and that it does right well.  This Dilg, it seems, is a straight buy who doesn’t like to be kicked around.  And so, for that, he is framed into a murder charge by the nabob of a New England town.  Well, he breaks out of prison and seeks shelter in Miss. Arthur’s house just on the night that an eminent law professor arrives to rent it for a term.  The professor is a theorist, a bachelor and an appointee to the Supreme Court.  And so the whole problem of the picture is to get him to spring to Dilg’s defense and, once in that groove, to spring Dilg.  A lot of fun and excitement result.

Irwin Shaw and Sidney Buchman wrote a smart and lively script for the film and George Stevens has directed it with the slyness of a first-rate comedy man.  No opportunities for comment with the camera have got by Mr. S.  Cary Grant plays Leopold Dilg with a casualness which is slightly disturbing, but Ronald Colman as the bearded professor is 100 per cent Harvard Law.  (Cultured, that is.)  Miss Arthur is charming, as usual, in her bewilderment, and Edgar Buchana, Glenda Farrell and Rex Ingram are rich in lesser roles.

The Talk of the Town is going to make a lot of people laugh and feel good.  It may be off beam in its philosophy, but its quality of humor is not strained.