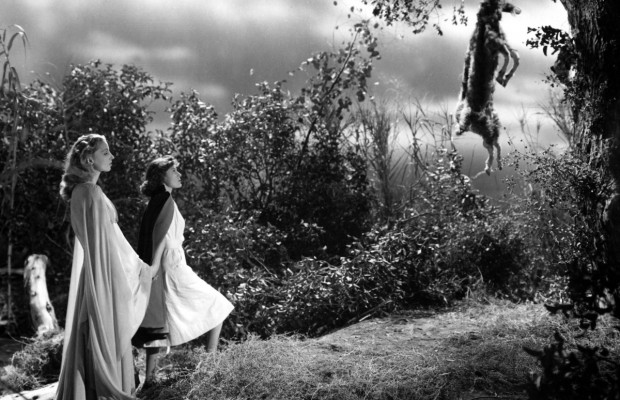 Toronto Film Society presented I Walked With a Zombie (1943) on Monday, April 1, 1974 in a double bill with Sunset Boulevard as part of the Season 26 Monday Evening Film Buff Series, Programme 5.

The series of eleven low-budget horror films produced by Val Lewton at RKO in the Forties can stand as at once a demonstration of the limitations of the auteur theory and its vindication.  They are usually regarded as essentially Lewton’s films.  Much of their taste, intelligence and discretion is attributable to his planning and supervision and it becomes peculiarly difficult to sort out the precise contributions of producer, writer and director.  The Cat People and I Walked With a Zombie were both directed by Jacques Tourneur. They exhibit not only stylistic but thematic features that at once connect them with each other and distinguish them from other films in the series, such as The Body Snatcher (Robert Wise) and Bedlam (Mark Robson).  Though I think it is Tourneur’s contribution that distinguishes them from their companions, I feel that Cat People and Zombie should be regarded as group achievements with due credit to Lewton and the scriptwriters DeWitt Bodeen and Curt Siodmak.  Both films are beautifully planned and mostly well-written; under Tourneur their implicit poetry reaches sensitive visual expression.

Jacques Tourneur spent parts of his childhood in Europe and made three films in France before settling in America in the late Thirties.  Tourneur considers I Walk With a Zombie, with Stars in My Crown and Out of the Past, one of his three best movies.  He also claims it as one of only two of his films which he has been in on right from the original conception.  He regards it as one of his most personal works and this is confirmed by the film itself.

I Walked With a Zombie hints at an equation between the zombie state (“the living dead”) and emotional death, but the filmmaker has respected the poetic power of the myth.  Psychological meaning remains a matter of suggestion; it is never insisted upon or spelled out.  The clue to reading the film is given us in Paul’s speech on the boat that brings the nurse, Betsy, to the island.  He tells her that the beauty she is admiring is illusory–she is coming to a world where nothing is what it seems.  Uncertainty, ambiguity, the reversal of expectations, pervade every aspect of the film.  The shadows and half-lights of its haunting atmospheric quality are but the expression of its moral and spiritual world, in which nothing fixed or certain, nothing is as it seems: a world subtly dominated by the subconscious. By the end of the film everything has proved to be other than what it seemed–even the motives of clean, decent-thinking Betsy herself.

Tourneur’s style, and the natural way it associates with Lewton’s taste and intelligence, can be fittingly illustrated by Zombie‘s most celebrated atmospheric set-piece: the scene in which Betsy takes her patient to a nocturnal voodoo meeting in a desperate attempt to cure her.  The sequence is introduced by a medium-long-shot of an unnaturally tall, gaunt Negro standing in the shadowy moonlight at a cross-roads in the middle of the cane fields.  The image has a dream-like quality–inexplicable, haunting, beautiful and sinister.  It creates unease without any suggestion of a shock effect.  It also gives us a sense that the journey to the voodoo meeting is a journey into a dream.  The women’s progress through the cane fields is filmed mostly in medium-long shot and the various sinister details en route, signposting the way, are introduced without over-emphasis.  Especially characteristic is the introduction of the giant Negro at the cross-roads: the camera follows the light from Betsy’s torch as it moves forward along the ground, until it suddenly encounters a dark foot.  There is no shock-cut, no crashing chord; the frisson arises from the simple process of discovery, without underlining.  The sequence, recalling others like it in this and other Tourneur movies, is unlike the work of any other American director I can think of.