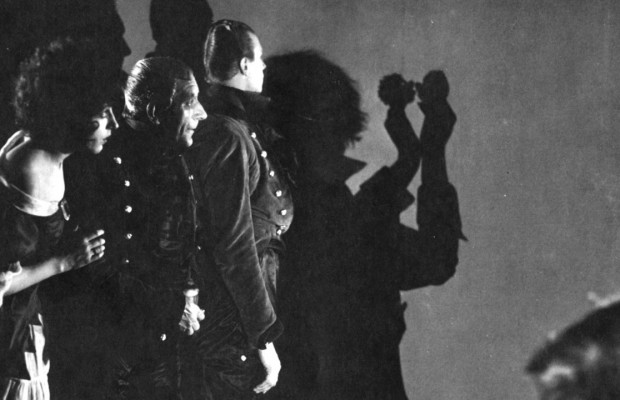 Whether or not “Warning Shadows” arouses intense admiration or intense dislike, there is no half-way attitude; no one will deny that it is unlike any other film ever shown.  It’s appeal is uncompromisingly high-brow.  If advertised as a show for those who have the taste of connoisseurs it could be screened as New York with every chance of success.

“This drama,” say the program which is so silent regarding facts, “is wholly dependent upon the mental co-operation of the spectator.  You are asked to replace the sub-title, which is entirely absent, out of your own imagination.”  The plot is not so difficult as that; it is, in fact, simple enough to do without captions.

The scene is a manor overlooking the market place in a small German town.  But no particular period is indicated, as the costumes, faintly suggestive of the Empire period, are the design of fancy.  There is a husband whose massive features make one think of Beethoven.  There are three cavaliers who call to pay their respects to his wife and, while doing so, amuse themselves by making their shadows kiss and caress her shadow on the blind.  The husband, seeing these amorous silhouettes, is consumed with jealousy.

At dinner, noticing the love-lorn glances his wife and a youth are exchanging, he is enraged still further.  A glass is shattered in his hand.  The servants are called to take away the wine-stained cloth.  They do not answer the bell, and their master goes to fetch them.  He finds them in the hall entranced by the shadowgraph performance of a wandering showman.  The husband has the entertainment brought to the dining-room, and the guests take amusement in a story of a mandarin’s jealousy acted by the shadows of cardboard figures on the screen.  In the midst of the drama the showman reverses all the shadows in the room so that the diners sit watching their silhouettes.  The wife goes to her chamber, the youth follows, the husband sees them kiss.  Maddened by jealousy, he binds his wife, places her on the table and forces the three cavaliers to advance upon her with leveled swords until the points pierce her breast.  At the youth’s instigation they then turn their swords upon the husband and drive him through a window.  He falls upon the cobbles of the market-place, dead.  The shadows in the room reverse themselves again.  The husband, the wife, the youth and the three cavaliers awake to find themselves still sitting at table.  The husband and wife cling to each other while the guests depart.  The showman leaves with a great jewel to mark the hosts’s gratitude.  Lastly, the servants who have also been laid under the trance, awake.  The dawn breaks and the market stirs with life.

This magical and magnificent film ends with the quiet, homely touches to assure us that the world is sane when not colored by the emotions of the spectators.

Throughout, the perfection of details shows the hand of a master.  The photography, too, is excellent.  Yet “Warning Shadows,” it is said, has had to wait two years before being exhibited in London.  How long will it have to wait before it will be ready for exhibition to the average picture patron?

A German picture called “Warning Shadows,” which met with some success in London about three years ago, is to be seen this week at the Fifty-fifth Street Cinema.  It is nicely produced, for nobody can complain about the acting, the photography, the lighting effects or the costumes.  But the producer defies you to fathom what the characters are up to.  This production has no titles, and after viewing it one concludes that captions, exasperating though they may be in some pictures, would be a blessing in this case.  It is not long before this picture begins to create a desire to yawn, and half an hour after it has been cavorting across the screen you may become fidgety, for with all its artistic bent one gleans less about the photoplay than one would in viewing an ordinary Hollywood production stripped of its titles.

It is like a good-looking woman who is a deaf mute or a stage play in which the actors permit only one word in a hundred to be heard.  On the program it is described as “a drama of jealousy in six acts, unaided by the literary subtitle.”  Art or no art, it was quite pleasing to descend from the pinnacles of highbrowism to the valley of comedy and once again enjoy some of the episodes in Charlie Chaplin’s old burlesque of “Carmen,” which is hailed on the program as “a sure cure for any one’s operatic aspirations.”