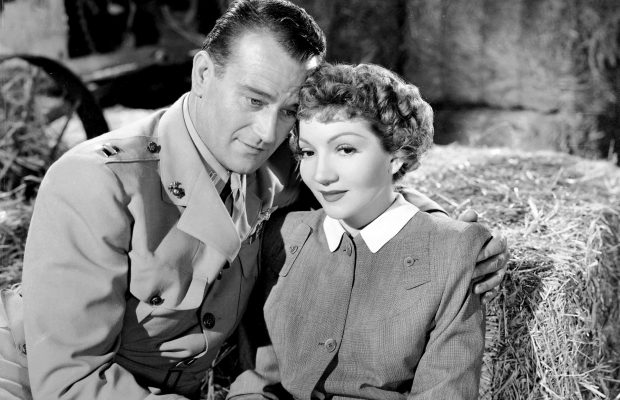 Toronto Film Society presented Without Reservations (1946) on Monday, March 17, 1986 in a double bill with Summer Stock as part of the Season 38 Monday Evening Film Buffs Series “B”, Programme 9.

The similarity of Without Reservations to It Happened One Night must have appealed to Colbert, only this time she had Mervyn LeRoy as director instead of Frank Capra and John Wayne as costar instead of Clark Gable…The reviews were mixed, and commentators have been arguing about Without Reservations ever since.  Those who dislike the film found it forced, heavy-handed, and derivative.  Those who liked it thought it sparkling, clever, and witty.

Mervyn LeRoy seems to have felt some guilt and confusion about this picture.  Light comedy was simply not his forte, though he could be superb when guiding Vivien Leigh through the romantic Waterloo Bridge (1940) and Greer Garson through the drama of Madame Curie (1943).  He had also done well at Warners, where he got fine performances out of Paul Muni and Edward G. Robinson in their more lethal gangster roles.  In his autobiography, “Take One”, LeRoy made fun of Colbert in ways that readers of his book thought ungentlemanly.  “She had a strange habit of never looking where she was going,” LeRoy wrote.  “She kept bumping into things.  I remember one day seeing her heading straight for the side of her dressing room-trailer.  ‘Watch out, Claudette,’ I yelled, but she kept right on course and banged into the wall.” 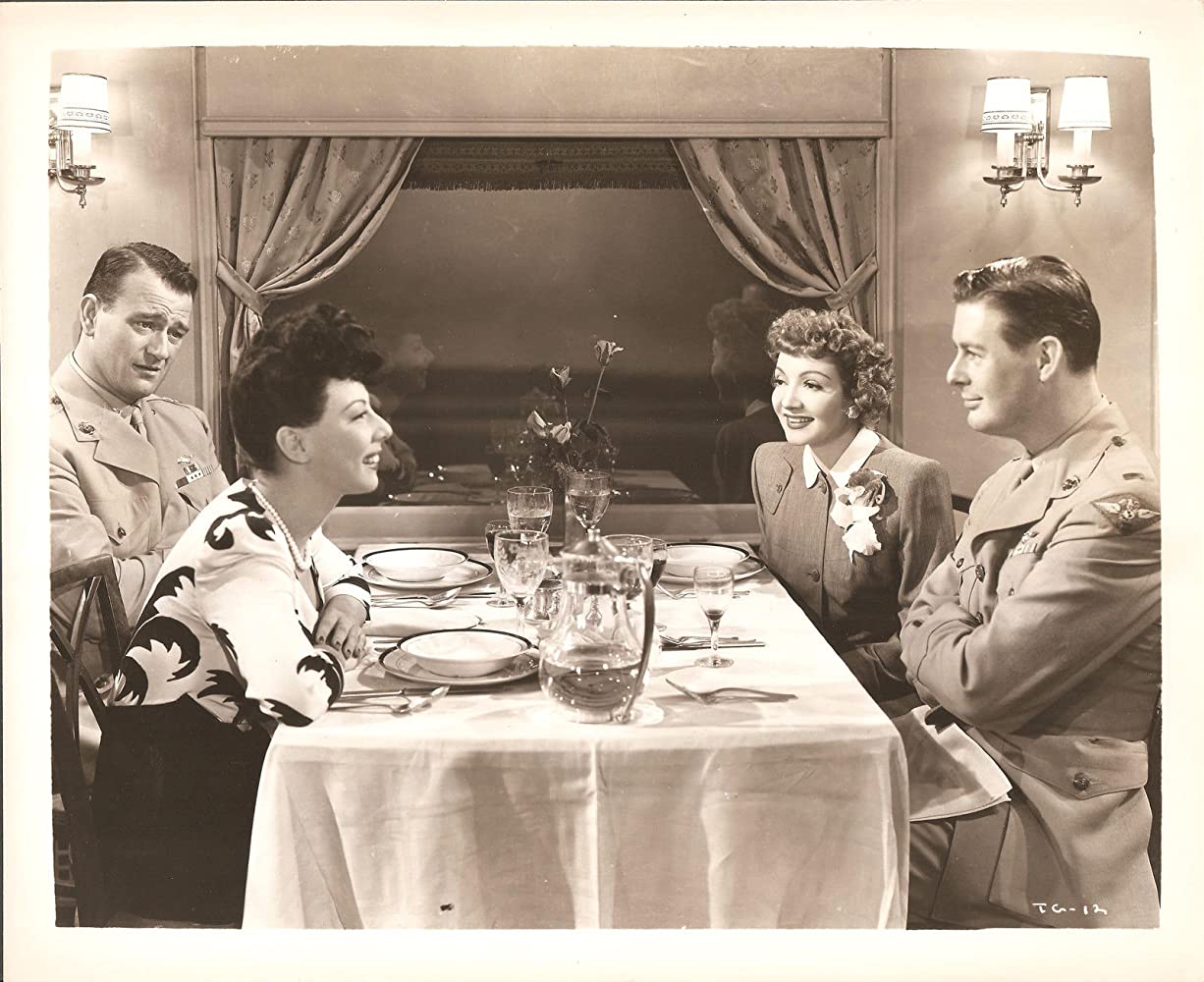 LeRoy and John Wayne became great friends during this picture.  Possibly in his efforts to favor Wayne, who relied less on talent and more on his masculinity to project his star image, LeRoy left Colbert to her own devices, and otherwise showed his unease with comedy–which might explain Colbert’s “bumping-into-things” nervousness on a set so strong on macho overtones and so weak on comic invention.  Surprisingly it was Wayne in later years who gave insight into the Colbert-hating LeRoy, when he said in an interview that Colbert felt LeRoy was no Capra or Leisen and tried to coach him on comic nuances.  LeRoy took refuge in his masculine pride, ignored her suggestions, and blundered on…  “I could have used some help with the comic timing,” Wayne admitted with surprising humility.  “I was never really at ease up against the likes of Marlene Dietrich and Joan Crawford, and hell, I knew Claudette could act the pants off me and was by far my superior in comedy.  But Mervyn wasn’t letting any woman tell him what to do, so her suggestions were largely shunted aside.”

In fairness to LeRoy, he might have done splendidly with Colbert on a serious drama or a plush romantic vehicle of the kind with which he had made a major star out of Greer Garson at MGM.  LeRoy did boast a certain creative eclecticism.  He was at his weakest when doing comedy, though Colbert could have helped him had he not been too proud to listen to her, but he could handle men and women stars equally well, getting hard-hitting gangster action from the men and the most passionate scenes from the women.  Had he and Colbert met for Tomorrow Is Forever or Since You Went Away, he could undoubtedly have worked as well with her as Irving Pichel or John Cromwell did.  As it was, we had the spectacle of LeRoy as the one and only director ever to accuse Colbert of bumping into walls!