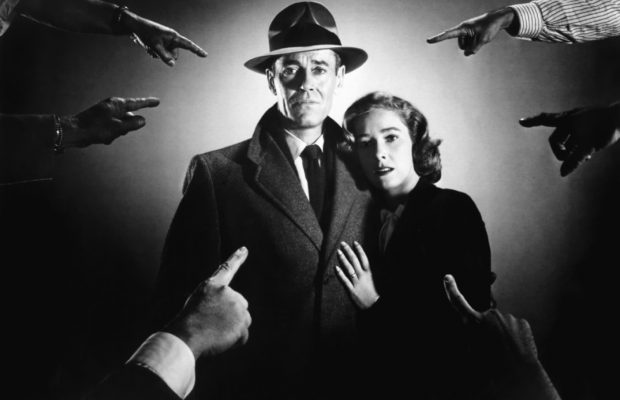 Although the scenario (written by Hitchcock, McPhail and Anderson, based on Anderson’s “The True Story of Christopher Emmanuel Balestrero,” and inspired by a Life magazine article) is realistically constructed, it is regarded by most critics as an interruption in the increasingly complex Hitchcock filmography from 1954 to the present.  But it seems to me a perfectly logical development.  The director has always been fascinated by the theme of a man trying to establish his innocence of a crime (The Thirty-Nine Steps, Young and Innocent, Saboteur, Spellbound, To Catch a Thief, North by Northwest, Frenzy).  Hitchcock’s previous film, The Man Who Knew Too Much, described the effects of chaos on a vacationing American family, and examined the tenuous emotional stability of a wife under pressure.  In The Wrong Man he offers an urban treatment of the same theme–and a darker, more intense study of a family on the brink of destruction.

Robert Burks’ cinematography subverts both an objective viewpoint and a sense of balance.  Little is shown at eye level; high and low angles of vision predominate.  We see what Manny sees, and in such a way that we are made to feel both his impotence in coping with a frequently rigid police system, and his growing sense of despair.  These angles of vision also remove The Wrong Man from the sphere of documentary.  As the story progresses, we behold a world increasingly “off center.”  One false accusation engenders a wife’s mental breakdown and a family’s break-up.  The entire cinematic movement of the film upsets a sense of social and psychic balance.  If nothing is what it appears to be, and if the judicial system is itself unstable, susceptible to being thrown off balance by the police’s determination to “get a man” and by the careless observations of citizens, then the modern world is indeed shot through with chaos…

The situation and emotional landscape of the film recall Kafka’s The Trial.  The sense of urban compression and impersonality are dramatized in both by the proximity of loud elevated trains and the contiguity of attorney’s office and insurance offices.  Kafka and Hitchcock also share as sense of ineluctable tragedy which depends for its effects on the use of dialogue and settings which are intentionally banal; the human dimensions they describe have the dimensions of a poetic tragedy.  Film locales were shot with the interpretive fidelity to detail and a sense of the loss of identity that city living means for many.

To view the film primarily as the condemnation of a harsh and impersonal judicial system is to miss its wider scope and to limit its provocative potential.  Hitchcock’s mistrust and fear are directed at the whole of society, at the tenuous psychological structures we build as a defense against that society…

At the conclusion of the film, when Manny’s double is apprehended by the shopkeeper, the thief shouts: “I haven’t done anything!  I have a wife and kids waiting for me at home!”  These were the words Manny used at the beginning, and this writer, at least, is not at all convinced that the man finally apprehended is indeed the “right man.”  We know nothing of this new suspect except that he attempts an armed robbery at the end; whether he is guilty of the original robbery is not established.  It is possible, therefore, that the entire tragedy may be freshly repeated.  Who, in the final analysis, is really the right man–or the wrong man?  And wrong in what socio-spiritual dimension?  For Hitchcock, as for Manny and Rose, the answers are not so simple as the police would have us believe.