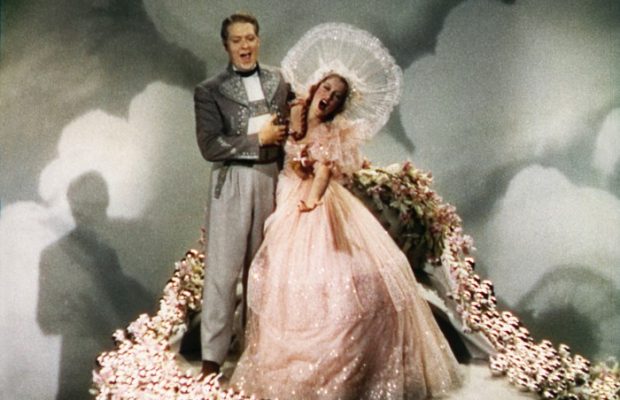 One of the liveliest of the eanett MacDonald and Nelson Eddy musicals.  The title is ironic; they are squabbling husband and wife operetta stars, trading insults written by Dorothy Parker and Alan Campbell.  The Parker-Campbell script has nothing to do with the original story of Victor Herbert’s 1913 operetta; the sons are retained as part of the long running show “Sweethearts,” that the couple is appearing in.  This was MGM’s first three-color-process Technicolor feature, and it has startling color costuming by Adrian.  Directed by W.S. Van Dyke; choreographed by Albertina Rasch.

From The New Yorker‘s current films column about a year ago, at the time the film was reviewed at a New York repertory cinema

Later in 1938 they partially redeemed themselves by relaxing a bit in their roles as a bickering musical comedy team in Sweethearts, directed by reliable W.S. Van Dyke.  Their first in Technicolor, the film has the advantage of a literate screenplay by Dorothy Parker and Alan Campbell and some lively tunes by Victor Herbert.  Ray Bolger contributes his impish presence and dancing feet and joins Jeanette in a pleasant little Dutch dance number called, appropriately enough, “Wonder Shoes.”  Both co-stars look right at home in color and contemporary clothes which help to mask the bulges around Eddy’smiddle that had been so obvious in his most recent costume films.  Sweethearts is not a great movie, but it still provides as Bosley Crowther wrote in The New York Times an evening of “sweet, theatrical sentiment.”