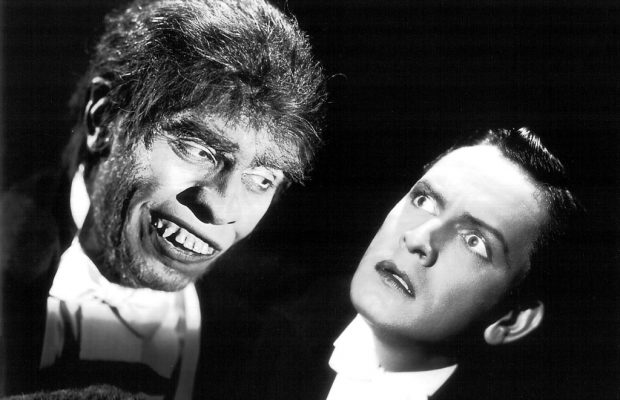 Toronto Film Society presented Dr. Jekyll and Mr. Hyde (1931) on Monday, December 3, 1979 in a double bill with The Searchers as part of the Season 32 Monday Evening Film Buff Series, Programme 4.

In an unexpected departure from his normal impressionistic practice, Mamoulian begins Dr. Jekyll and Mr. Hyde with the celebrated sequence seen from Jekyll’s point of view, opening with a shot of organ pipes as a Bach fugue peals out, panning down to a close-up of hands on the keyboard, and remaining stubbornly subjective–sheet music on the organ, butler entering to remind him of his lecture, his reflection in the hall mirror as he puts on his hat and cloak, climbing into a carriage, arriving at the university–until he enters the lecture room, when the camera pans around in a 360° arc and, on the first word of his lecture, “Gentlemen…” cuts to the back of the auditorium for the first objective view of Jekyll himself.  Arthur Knight notes that “the subjective camera built a growing suspense, a curiosity about the appearance of the man we know will turn into the monstrous Hyde”.  Mamoulian himself has said that he wanted to draw the audience into Jekyll’s brain, to create an experience in which–as with the transformations–the audience does not see him–they are him”.

In any adaptation of Stevenson’s story, the transformation scene is inescapable: the audience is sitting waiting for the moment when handsome Jekyll will be metamorphosed into the deformed and diabolical Hyde, and Mamoulian plays the game beautifully.  To this day he has refused to reveal the secret of how the transformations were achieved in front of the camera, but it is not difficult to guess that they were done with coloured filters, changed to reveal different layers of make-up, and given a hallucinatory sense of actually happening before our eyes by the extraordinary soundtrack.  As described by Mamoulian: ‘To accompany the transformations I wanted a completely unrealistic sound.  First I tried rhythmic beats, like a heart-beat.  We tried every sort of drum, but they all sounded like drums.  Then I recorded my own heart beating, and it was perfect, marvellous.  Then we recorded a gong, took off the actual impact noise, and reversed the reverberations.  Finally we painted on the soundtrack; and I think that was the first time anyone had used synthetic sound like that, working from light to sound.”…

March and Hopkins with director Mamoulian