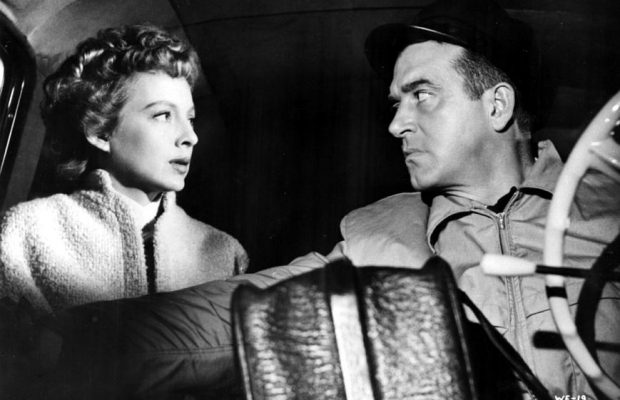 Evelyn Keyes was an interesting, unusual and talented actress.  In the 50s she made some memorable crime pictures and film noirs such as The Killer That Stalked New York which TFS showed two summers ago, The Prowler which was her favourite film, and today’s 99 River Street.  In her biography, she doesn’t say much of anything about the making of this film, except that she had to head back to Hollywood from her home which at that time was in Paris, France.  During the making of this film was when she met producer Mike Todd, whom she had a tumultuous three-year relationship with until he up and left her for Elizabeth Taylor.

Evelyn Keyes, while married to her third husband John Huston, became friends with the Bogarts and during that marriage The Treasure of the Sierra Madre and Key Largo were made.  Like the Bogarts, throughout her memoir, she talked about the evils of HUAC and how many people’s lives it ruined.

Keyes was born in Port Arthur, Texas but grew up in Atlanta, Georgia where her mother and four siblings moved after her father died when Keyes was just two-years-old.  After finishing school, she headed out to seek fame and fortune in Hollywood.  She was originally mentored by Cecil B. DeMille, who told her to lose her Southern accent, then assigned her to her first role in The Buccaneer starring Fredric March in 1938.  But just after the filming for Gone With the Wind was completed, DeMille released her from her contract.  However, soon after, she was signed by Columbia head Harry Cohn and given a supporting role in the 1940 film, The Lady in Question, which was the remake of the 1937 French film Heart of Paris, acting alongside Brian Aherne, Glenn Ford and Rita Hayworth.

Evelyn was married four times in total, almost five, if you include her long-standing relationship with Mike Todd.  Although she wanted to be a successful actress, it appears her biggest goal was to achieve a successful marriage.  Unfortunately, she had a hard time of it.  Her first marriage was to a businessman, Barton Bainbridge, and when they had separated, he committed suicide.  She said that she would never again leave a man.  “I made them leave me, instead,” she declared.  Her second marriage was to director Charles Vidor, which started when they were both still married although separated, her to Bainbridge and Vidor to actress Karen Morley.  She was involved in this relationship at the time she was making Here Comes Mr. Jordan in 1941 with Robert Montgomery.  He was not impressed with the fact that she was dating a married man; she felt it wasn’t his business, and the two of them never spoke when the cameras weren’t rolling, making working on the film an unpleasant experience for her.  Not long afterward she hastily married John Huston, had what we would now call a common law relationship with Mike Todd, while her last marriage was to musician Artie Shaw, beginning in 1957 and ending in 1985.  This was Shaw’s 8th marriage and the last marriage for both.

Keye’s wrote three books, two of them memoirs, her first published in 1977 and her last in 1991, plus a novel titled “I am a Billboard” written in 1971.  After reading her first autobiography, I would be interested to read her other two as Keye’s style is quite wonderful.  She’s a vivid and introspective writer.

Not an unsurprising quote once you get to know her, she has said, “to become a big movie star like Joan Crawford you need to wear blinders and pay single-minded attention to your career. Nobody paid attention to me, including me. I was the original Cinderella girl, looking for the happy ending in the fairy story. But my fantasy prince never came.”

Very recently, I watched one of her earlier films, the 1943 Dangerous Blondes.  Here she plays the wife of a crime fiction writer, played by Allyn Joslyn, who is always eyeing the other lovely blondes, two of them played by Anita Louise and Ann Savage, with his loving wife always having to rein him in.  After finishing Keye’s biography, I felt that this film kind of spoke to many of her real-life relationships. Today’s film ends with what I think she wished for.

99 River Street, shot by the gifted German émigré Franz Planer, who fled Hitler’s Germany but never really had the career in Hollywood he deserved, is even more despairing about the human condition than any of director Phil Karlson’s previous films. Produced by another small production entity, Edward Small Productions, and again released through United Artists, the film helped to consolidate Karlson’s maverick reputation, though it did little to get him back into the major studio system.

Having seen this film myself a couple of years ago at Cinevent in Columbus, Ohio, I have to say I am quite looking forward to seeing this edgy film again.  Some films, once you know the story, have angles to them that allow you to enjoy the film in the second viewing by keeping the plot twists in mind.  So with that, here’s 99 River Street. 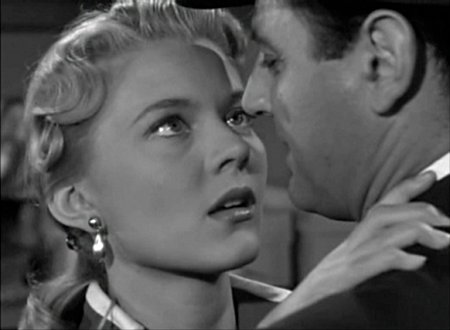 The Story: Having lost his heavyweight championship match, boxer Ernie Driscoll now drives a taxi for a living and earns the scorn of his nagging wife, Pauline, who blames him for her lack of social status. Involved with jewel thief Victor Rawlins, Pauline is murdered by him when she impedes his ability to fence the jewels. Blamed for his wife’s murder, Ernie must track down Rawlins before he leaves the country.

“A rugged crime caper with Payne caught up in tawdry surroundings, trying to prove himself innocent of a murder charge. This unpretentious film really packs a punch.” – Leonard Maltin

“An emasculated former boxer (John Payne) with a lousy job, damaged vision, and a cheating wife runs into even bigger problems when said cheating wife turns up dead in his taxi cab (movie justice: adulterers gettin’ theirs). [This] nifty B-noir gets a smidge too cute with the close-ups, and the plot is really a stretch, though the cast of rogues lends it that all-too-essential seedy, downbeat mystique. In an ironic twist, it’s a stage actress (Evelyn Keyes) that teaches our battered-and-beaten hero about care and trust, though the fact that this doesn’t end with a kiss, but with a whisper and a hug, is very curious. (It takes time to heal.)” -Matthew Lotti (cinematicthreads.com)