Toronto Film Society presented Rebel Without a Cause (1955) on Monday, October 24, 2022 as part of the Season 75 Monday Evening Film Buffs Series, Programme 1.

Rebel Without a Cause spans just over 24 hours in the lives of Jim Stark (James Dean), Judy (Natalie Wood), and “Plato” (Sal Mineo), who meet after being brought into the local police station for various infractions.

Through interviews with the teens, juvenile division counselor Ray Fremick (Edward Platt) realizes that Judy’s father has been withholding affection and Plato lives with a neglectful single mother after being abandoned by his father at a young age.

It becomes apparent when Jim’s father arrives at the station, and through subsequent scenes in the film, that he has been feminized and is dominated by his wife. “You’re tearing me apart!” Jim screams at his at his bickering parents, giving voice to the agonizing confusion and alienation felt by his generation.

The three adolescents bond over shared domestic situations that are in stark contrast to the post-war propaganda about ‘the ideal family’, and ultimately form their own “family” of parents (Jim and Judy) and child (Plato).

The title was adopted from psychiatrist Robert M. Lindner’s 1944 book, Rebel Without a Cause: The Hypnoanalysis of a Criminal Psychopath. The film, however, does not make any references to Lindner’s book in any way.

It was one of many movies, including The Delinquents, The Wild One, and Blackboard Jungle, that were a response to the moral panic about the perceived ‘social problem’ of juvenile delinquency. While this perception didn’t align with actual incidences of youth crime, ‘delinquency’ was likely a coded term for broader shifts in youth behaviour that were a prelude to the counterculture that erupted in the 1960s. 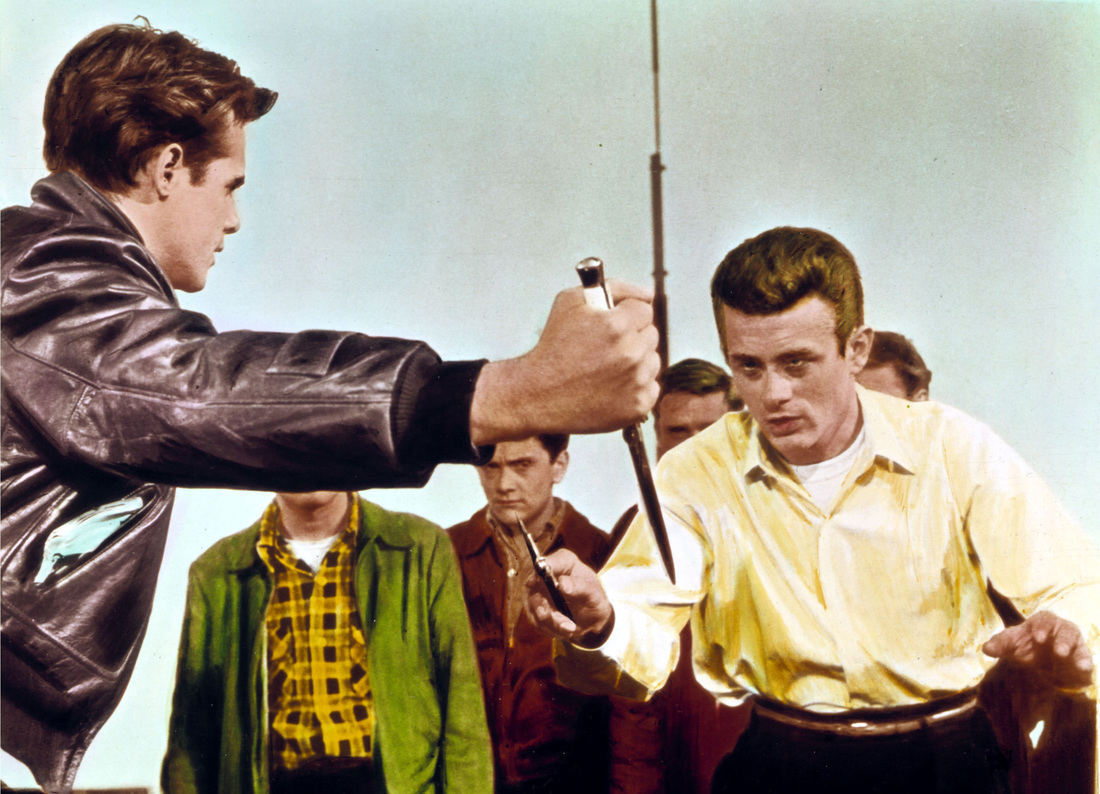 Set in middle class suburbia, Rebel Without a Cause is markedly different from its counterparts who feature teenagers from “the wrong side of the track”. Director Nicholas Ray conducted extensive research on juvenile delinquency, interviewed teenagers, and even cast Frank Mazzola, an actual gang member, as Crunch, to consult on scenes, dialogue, and wardrobe (Dean’s 1949 Mercury was apparently his idea). All of these efforts materialized in a sympathetic portrayal of youth and a critique of their parents as ineffective role models culminating in a movie that was a bit hit with young audiences.

The film was originally slated as a Warner Brothers B movie shot in black and white with Tab Hunter set to play the lead. Filming was delayed on Giant when Elizabeth Taylor became pregnant, freeing up Dean (who director Ray favoured over Hunter) to play Jim Stark. Dean’s rising star following the release of East of Eden led Warner Brothers to upmarket the movie to A-list shot in colour in the new CinemaScope format. It’s hard now to imagine the movie without Dean’s iconic red Harrington windbreaker (which, incidentally, still retails today for $74 USD).

Nicholas Ray apprenticed with Elia Kazan, breaking out on his own as Director-auteur of They Live By Night, Knock on Any Door and A Lonely Place (the latter two starring Humphrey Bogart) in the 1940s. His career declined following Rebel Without A Cause, in large part due to his battles with alcohol and drugs. He is often cited as one of the most influential and yet underrated directors from Hollywood’s Golden Age.

Rebel Without a Cause was the only film during James Dean’s lifetime in which he received top billing. Ray realized early on that Dean was the heart of the film, letting him participate in screen re-writes, improvise, and even direct some scenes, including the one in which Jim confronts his father.

Practicing method acting, he insisted on real violence including the use of actual switch blades in the fight scene between Jim and Buzz (Corey Allen), resulting in both broken bones and cuts during filming. He allegedly lashed out at Ray for cutting a scene in which he was injured rather than capturing the real blood and ensuing pain on film.

According to a biography of Natalie Wood, she almost did not get the role of Judy because Ray thought that she was not right for the part of a wild teen character (she was known only as a child actor up to this point). While on a night out with friends, including then boyfriend Dennis Hopper, she got into a car accident.

Upon hearing this, Ray rushed to the hospital. When Wood overheard the doctor murmuring and calling her a “goddamn juvenile delinquent” she said to Ray, “Now do I get the part?!” Other sources claim that Dennis Hopper confronted 43 year old Ray about sleeping with 16 year old Wood, prompting Ray to remove him from the picture (he was set to play gang member Crunch). Due to pressure from Warner Brothers, Ray returned him to the cast in the smaller, non-speaking role of Goon.

Some sources site Ray as bisexual, though he never publicly identified this way, and claim he also had dalliances with Dean and Sal Mineo. Mineo did come out later in life as bisexual and stated that he portrayed the first gay teenager on film in Rebel Without a Cause. Despite warnings from the Motion Picture Production Code against “inference of a questionable or homosexual relationship between Plato and Jim”, Ray included a pin up style photo of Alan Ladd in Plato’s locker and telling looks of adoration between Plato and Jim (Dean directed Mineo in one scene to “look at me like I look at Natalie”). The gay subtext seemed to slide past audiences and critics at the time but is hard for the modern viewer to ignore.

All three stars suffered tragic, untimely deaths.  Dean, youngest of all, ironically (given the pivotal “Chickie Run” scene) died in a car crash September 30, 1955, at age 24, just 4 weeks before the theatrical release of Rebel Without a Cause. Mineo was stabbed to death outside his West Hollywood apartment at 37, and Wood mysteriously drowned off the coast of Santa Catalina at age 43.

In 1990, Rebel Without a Cause was added to the Library of Congress’ National Film Registry as being deemed “culturally, historically, and aesthetically significant”. Natalie Wood, Sal Mineo, and Nicholas Ray were nominated for Academy Awards for their roles in the film, which grossed $7,197,000 in domestic and overseas screenings, making it Warner Bros.’ second-biggest box office draw that year.

While not all modern viewers will feel sympathy for Jim, given his privileged middle class suburban lifestyle and what could be considered contrived, stereotypical conflict of his parents, the familial and social strife faced by all three characters has a universal quality that continues to resonate with viewers today.

The optimistic ending seems like an add-on to placate older audiences in a film with a message that is otherwise clear: disillusioned teens have woken up to the fact that “father doesn’t know best” and have a desire to forge their own paths.

Despite any perceived flaws, Rebel Without a Cause triggered many spin offs starring James Dean wannabes who could never quite match his emotional performance or on-screen charisma and appeal. And viewers will always be left wondering how he would have further honed his craft had circumstances differed.