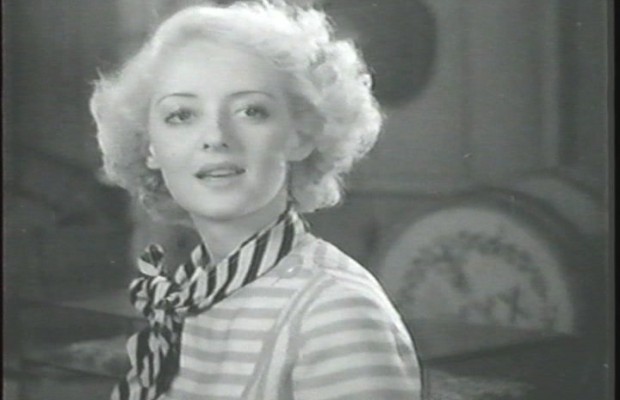 Toronto Film Society presented The Cabin in the Cotton on Saturday, May 11, 2013 as part of Season 66 May Festival: The Pre-Code Weekend.

“Ah’d love to kiss ya, but ah just washed mah hair,” the platinum-blonde belle coos suggestively in a honeyed Southern drawl. With those words, 24-year-old Bette Davis, playing her first bad girl, left behind the obscurity of being a Warner Brothers contract player and got on the fast track to stardom.  This is a film that TFS showed many years ago.  I am looking forward to seeing it again.  Although it was available on video, it is still not available on DVD so I’m not sure where this film was sourced from.

Picture proves again that a book that attracts a good deal of attention isn’t necessarily screen material.  Subject matter here doubtless has dramatic power in its essence, but it doesn’t come through to the audience from the screen.  Less than a moderate grosser all around, probably with its weakest reaction in the big cities.

Title doesn’t attract attention to start with, and the subject matter isn’t of wide appeal, having to do with what the advance notices describe as ‘a great contemporary social conflict,’ which everybody conceded is vividly American and up-to-date, but which doesn’t particularly concern the average fan.

Conflict in point is the feud between southern cotton planter (land owner) and tenant farmer (here described as ‘peckerwoods’).  It’s the industrial capital vs. labor wrangle all over again in another setting, and not a particularly fascinating one at that.

Picture is not well done and it presents Barthelmess in another luke-warm role, a role which he plays without vigor.  Nub of the drama is that Marvin Blake belongs to the under-dog tenant farmer class, but is befriended by the planter and finds himself between two fires—torn by loyalty to his class and an obligation to their enemy who also is his benefactor.  Also Marvin falls in love with the planter’s daughter.

That ought to supply a wealth of dramatic conflict and histrionic fireworks, but it doesn’t.  The best you get out of it is that the boy is extremely uncomfortable.  He knows that the farmers are stealing the planter’s cotton, but he thinks there is some justice on their side.  But he doesn’t do anything about it, but just trails along with both sides in a passive sort of way.  One passage deals with a man-hunt and a lynching, when a poor white farmer kills a distant planter.  Marvin goes along on the hunt, unwillingly, but he goes.  He makes a feeble effort to help the fugitive when he runs into him in the swamp, but nothing comes of it, and he stands in sorry wretchedness when the poor devil is strung up.  A sorry kind of hero all around.

In the end there’s a showdown.  The boy has to take sides, and the way he meets the issue isn’t any cinema epic.  He calls a mass meeting of farmers and planters and forces the land owners to agree to a co-operative farming scheme.  In the novel it may have been absorbing.

On the romantic side Marvin is even less admirable.  He pays vague allegiance to his humble sweetheart of the cotton fields, but he breaks down when the headstrong and no-better-than-she-should-be daughter of the planter pays him violent and rather shameless court.  Idea of a film hero who has to be taken by storm by the heroine is a novel slant.

There is one passage in which the little hussy does a coy strip in front of him by way of coquetry.  Best this hero can do in the embarrassing situation is to gasp, ‘Madge!”  This was much too much for the Strand audience that witnessed the opening.  They broke down in merriment.  Bad cutting may have had something to do with the untoward reaction.  Or maybe the censor wrecked it.

Picture has all the flaws of an adapted book.  Incident is blurred and character is foggy.  Best feature is the playing of some poor white farmer types of which there is a vast variety.  Best are done by Henry B. Walthall and Tully Marshall.

Bette Davis is the naughty-naughty planter’s daughter and her rising popularity is really the firm’s best chance for business.  Dorothy Jordan, as the humble farm girl, is just a shadow.  Indeed, most of the people are puppet-like, including the Barthelmess character.

Quite one of the best of the early Warner talkies that mixed social comment with all-out melodrama, and also in many ways one of Michael Curtiz’ best films “Cabin in the Cotton” is quite undated today, and in terms of acting, camerawork and just about everything else, holds up superbly well.  Not an expensive film, the economy shows through occasionally.  The impressive scenes behind the main titles are lifted from Universal (“Show Boat” and “Uncle Tom’s Cabin”) and the occasional use of studio plus back projection for cotton field scenes is a little obvious today, although the skill with which such scenes are done are well above average 1932 standards.  But the very economy and lack of pretention gives it the raw, gutsy look it needs.

Some of the camerawork is truly beautiful, and the lighting in at least one early scene is brilliantly successful in evoking a feeling of blazing heat and dry dust.  Like all Warner-First National films of the period, it is a machine-made product with contract cameramen, players etc., but productions of this merit are in themselves a justification for such a machine.  Russell Simpson, David Landau, Tully Marshall et al may be type-cast contract players, but how efficiently are they utilized, and how we miss the existence of similar stock companies today.  And many of these comparatively unimportant players are far more versatile than one realizes: I can’t recall many performances by John Marston, but it’s interesting to contrast his very effective acting here as the lawyer associate of Barthelmess, with the brief unbilled bit he did the same year in “Blessed Event”, as the unctuous radio announcer.  Henry B. Walthall is nothing short of superb in his one big scene, and Barthelmess, in a kind of mature extension of “Tol’able David”, is quite fine too.  Bette Davis’ Madge is a standout too, for she imbues it with all the animal sensuality that her Mildred in “Of Human Bondage” should have had, and didn’t.  Admittedly, Mildred was a more difficult and certainly less appealing role, but by any standards her performance here, of two years earlier is infinitely superior.  Barthelmess has many problems in “Cabin in the Cotton” but it’s a little difficult to see why he makes such a problem of having to choose between Davis and Jordan—or settling for both.  Problems like that we’d all like to have!

There is undoubtedly a certain sincerity about most of the episodes of the pictorial conception of Henry Harrison Kroll’s novel, “The Cabin in the Cotton,” which was presented last night at the Warners’ Strand.  But notwithstanding this virtue, it is a film which seldom awakens any keen interest and Richard Barthelmess, who appears as Marvin Blake, gives a careful but hardly an inspired performance.  His general demeanour lacks the desired spontaneity and often he speaks his lines in a monotone.

Mr. Barthelmess never appears to be living his role.  His make-believe is always well on the surface.  Blake is extraordinarily popular with two girls, Betty Wright and Madge Norwood, the latter being the daughter of a well-to-do planter named Lane Norwood.  Miss Norwood sets her cap in such a zealous fashion at Blake that her conduct elicited laughter at the first showing of this production.  Like the tale as it comes to the screen, her actions are anything but subtle.

Michael Curtiz is responsible for the direction, which is uneven and sections of the narrative are rather muddled.  The suspense is not what it might be considering what happens, for here there is a lynching of a man who has killed another and Blake’s stepfather and others are busy stealing cotton during several scenes.  Blake is employed by Norwood, who has looked after the young man’s education.   The cotton thieves endeavour to make Blake a party to their crime by seeing that he caries one of the bags of stolen cotton to a gin.  After the burning of Norwood’s store Blake learns a great deal about Norwood’s manipulations and the way he has cheated his dead father, a poor land-renter, which puts a different complexion on matters.

At a gathering of land-renters and planters, Blake, backed by a lawyer, while admitting that some of the land-renters were wrong in stealing the cotton, harangues the planters for cheating the land-renters and he winds up by demanding a really fair contract.  When Norwood holds out against such an idea, Blake unbosoms himself concerning the manner in which Norwood had treated his father.  And Blake wins.

Bette Davis impersonates the fast Madge Norwood.  Dorothy Jordan plays the simple Betty Wright.  Both act well.  Henry B. Walthall plays a creditable performance as one of the cotton thieves.  Burton Churchill makes the most of the part of Norwood.