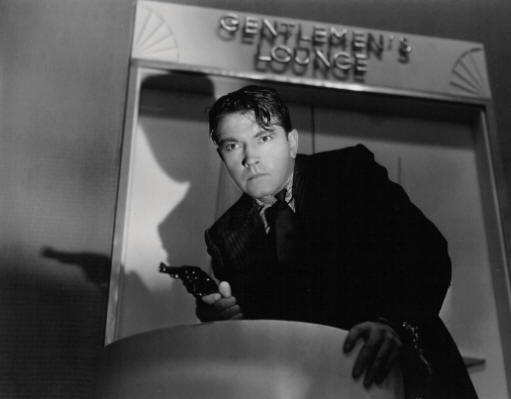 Toronto Film Society presented Four Hours to Kill (1935) on Monday, November 25, 1985 in a double bill with A Kiss Before Dying as part of the Season 38 Monday Evening Film Buffs Series “B”, Programme 4.

Four Hours to Kill was praised on its release in April of 1935 as “a gripping, although extremely theatrical, melodrama with a neatly dovetailed plot, a uniformly excellent cast and well-paced direction.” (New York Times)  A certain theatricality was perhaps desirable–not only was the film based on a successful Broadway play, but its action and audience of a New York theatre.  Various characters are introduced to us–the bored wife of a department store owner, the sleek young man with whom she is having an affair, a harassed cloakroom attendant, a nervous father-to-be and a condemned criminal handcuffed to a detective who must deliver him to be hanged.  The film’s climax comes when the criminal breaks loose and seeks to be revenged on the informer responsible for his death sentence. 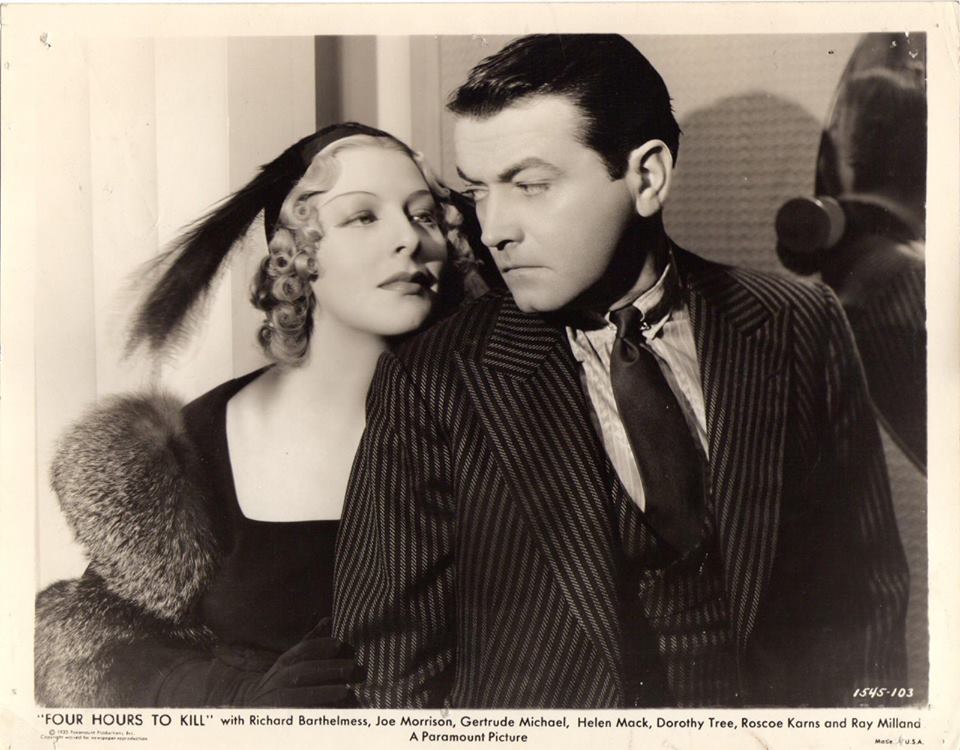 Mitchell Leisen, the director of Four Hours to Kill, began his career as an art director for Cecil B. DeMille, also serving as costume designer for several large silent productions including Robin Hood (1922) and The Thief of Bagdad (1924).  The desire for visual elegance seems never to have left him.  Leisen began directing his own films in 1933, working from scripts by Sturges, Brackett and Wilder and quickly developing a reputation for drawing good performances out of his players.  As John Gillett has noted, “Leisen worked best when surrounded by the finest writing and technical talents, moulding them together into a seamless whole and never apparently obtruding his own personality; yet the films’ very precision and economy testify to the effectiveness of his ‘invisible’ direction.”  In the 1950’s, however, the promotion of the best screenwriters to become directors left Mitchell Leisen (in Andrew Sarris’ phrase) “in the unenviable position of an expert diamond cutter working with lumpy coal” and his career went into a decline.

Four Hours to Kill, however, shows Leisen working with some of the best talent Hollywood had to offer.  Richard Barthelmess takes the role of the condemned convict–the man that Lillian Gish described as having “the most beautiful face of any man who ever went before the cameras.”  Barthelmess had been a major silent star, appearing in D.W. Griffith’s Broken Blossoms (1919) and Way Down East (1920) as well as Henry King’s Tol’able David (1921), before the arrival of sound diminished his popularity.  That this was due more to audiences’ changing tastes than any lack of ability on his part is amply demonstrated by his performance in tonight’s film.  As well as a great star on the way down, Four Hours to Kill features a star on the way up–Ray Milland in one of his first major roles.  Milland was to appear in six subsequent Mitchell Leisen films but he is probably best remembered for his Academy-Award-winning performance as the drunken writer of The Lost Weekend (1945) and for his role in Hitchcock’s 1954 film Dial M. for Murder.  With many of Hollywood’s finest character actors also appearing, the film boasts an impressive array of talent in a production that received little critical attention at the time.