Toronto Film Society presented The Seventh Cross (1944) on Monday, November 11, 1985 in a double bill with The Invisible Man as part of the Season 38 Monday Evening Film Buffs Series “B”, Programme 3.

Like Jules Dassin, George Sidney and David Miller, Fred Zinnemann got his directorial start turning out one and two-reelers for MGM’s Short Subjects Department.  He then graduated to “B” films and made two excellent low-budget features (low-budget for MGM, that is)–Eyes in the Night (1942) with Edward Arnold and Ann Harding, and Kid Glove Killer (1942) with Van Heflin and Marsha Hunt.  The Seventh Cross was his first major directorial assignment.  Said Zinnemannto interviewer Gene Phillips in Focus on Film: “Perhaps because I knew Europe well, this film about the Second World War seemed to have an authentic look about it, and was well received.”

The setting for the film is Nazi Germany in 1936.  Seven men escape from a concentration camp.  Through relentless pursuit, six men are recaptured and brought back to die on crosses built for them.  But the seventh man, George Heisler, (Spencer Tracy), finds a few brave underground workers who help him escape from the seventh cross that waits for him.  When he sees these men risk their lives to help him and the cause of decency, when he meets a girl (Signe Hasso) who would face death to express her love, he realizes that there is still some good in the world.

The novel that the screenplay for The Seventh Cross was based on had been first published in German, in 1939; the English translation had appeared in 1942.  Anna Seghers (the pen name of Netty Reiling Radvanyi), the author of the novel, was herself a German refugee from the Nazis.  A member of the Communist party, she had fled Germany in 1933 and gone to live in Mexico City.  She returned to Germany in 1947 and lived in East Berlin, where she died in 1983. 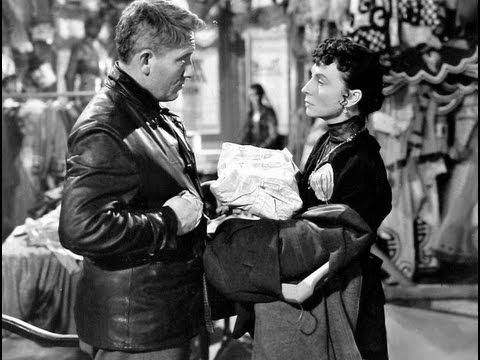 The Seventh Cross is remarkable for its sympathetic portrayal of the German people.  The fugitive finds a strong current of anti-Nazism, and the film implies that most Germans were not evil Nazis but merely allowed themselves to drift into Nazi rule.  It was a little too late to make amends.

The film got mostly good reviews–with reservations.  Bosley Crowther writing for the New York Times said: “Credit Fred Zinnemann, the director, and Karl Freund, the camera man, for much of the crackling tension and hard-packed realism that prevails.  And credit Helen Deutsch for adapting Frau Sehers’ novel with all its monstrousness intact.  Except for a wholly meretricious romantic interlude provided for the fugitive at the finish, the whole thing rings stunningly true.

Spencer Tracy gives a splendid performance as the tortured and anguished hunted man–a performance sharply reminiscent of that which he gave in Fury.  Hume Cronyn is splendidly bourgeois as the old pal who helps him out, and Jessica Tandy is emotionally devastating as the latter’s courageous wife.  Other good performances are given in lesser roles by Herbert Rudley, Paul Guilfoyle and Signe Hasso, even though that of the last named is a senseless one, at best.

The big reservation which this writer holds with regard to this film is that concerning the discretion of its theme at this particular time.  Without any question, it creates a human sympathy for the people of a nation with whom we are at war and it ends, as have some others, to load Germany’s national crime on Nazi backs.  Obviously this picture can make sentiment for a “soft” peace.  It looks as though we are getting a dandy “thriller” at a pretty high price.

In a film whose cast contained some of Hollywood’s greatest character actors–Agnes Moorehead, Ray Collins, Alexander Granach, George Macready, Paul Guilfoyle, and George Zucco–Hume Cronyn was singled out for particular praise by the reviewers, some of whom thought he was better than Tracy. Even noted critic James Agee who didn’t like the film or Tracy’s performance had some kind words about the supporting players.  Agee wrote as follows in The Nation: “As for The Seventh Cross, Metro-Goldwyn-Mayer has used it, with every good intention I am sure, to crucify the possibilities of a very fine movie.  Spencer Tracy is a sincere actor and in many respects a good one, but he is hopelessly ill-qualified to suggest a German anti-fascist who has escaped from a concentration camp; very little else in the film helps out, either.  In almost every respect, in fact, the picture is an ultra-typical MGM “major” production; it is perhaps unnecessary to add that the style is fatal to any sort of film except the purest low-ceiling romance.  Hume Cronyn, Steve Geray, and Agnes Moorehead to manage to cut a few glints of living acid through all the glossy lard, and one street shot of coarse legs in black cotton stockings, walking with casual peculiarity, has a suddenness, sadness, and individuality which should have taught those who made this film how to create and photograph a city.  One has to wonder, instead, how on earth it got into so conventional a show.”