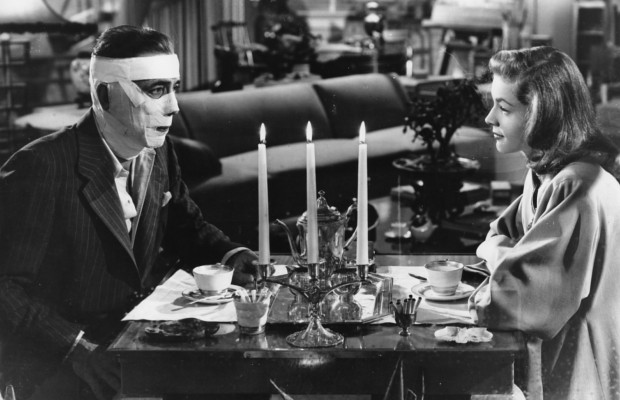 The Bogart-Bacall team is still box-office.  Sterling, sultry performances by the duo in a grim story that has plenty of killings and suspense, will more than offset the frequent slow pace and highly implausible story.  Clever directorial bits, and some tricky lensing will also carry the pic over the far-fetched hurdles, and bring it into the money.

The film has a sharp, brutal opening; macabre touches throughout and a thick, gruesome quality.  What starts out as a thriller switches en route into a sagging, psychological drama, but recovers in

time to give out with the satisfying gory stuff.  Miss Bacall’s charm and Bogart’s ruggedness count heavily in a strange treatment of a murder story, which if it doesn’t withstand scrutiny, does sustain mood and interest.

Scripting is superior and dialog frequently crackles.  Direction is smart, with suggestion of the impressionistic approach.  What begins as an apparent imitation of the “Lady in the Lake” technique, with the central figure speaking but not being visible to the audience, explains itself part way into the film in a clever fashion.  Bogart isn’t shown at the start because he’s supposed to look like someone else.  When a doctor has done a plastic surgery job on him to hide him from the police, and he looks the familiar Bogart, the point of his late appearance in the film is evident.

First actual appearance of Bogart, his face completely swathed in white bandages so that he looks like a mummy, has its own macabre-appeal.  Such smart touches abound in the film—the shadowy old Bogart lurking in a darkened cab; the hands of the convict gripping the drum at the start of the pic; the montage effect as Bogart comes out of the face operation.

Pic is a story of man imprisoned on circumstantial evidence for the murder of his wife, his escape from jail, and the efforts of a girl to help him, because her father similarly had suffered unjust imprisonment.  The man, on the lam from the cops, is involved with all sorts of characters—a garrulous, altruistic cabbie; a small-time blackmailer; the woman who actually killed his wife (and also bumped off his friend), and the strange art student who hid him from the police and befriended him.  There is little rhyme or reason to much of what goes on, but pic’s mood and performances hold the audience in suspense, even over the dull moments.

Miss Bacall, in a simple, unglamorous pose at the start, even then has a pleasant appeal, that hypoes intensely as soon as the old, sultry makeup and sexy charm are turned on.  Bogart is impressive in something of a lackluster character for him.  Agnes Moorehead is sufficiently vicious as the discarded femme who truns killer, giving the film some of its most vivid moments in her big scene at the

Outdoor shots, of the San Francisco bridge, of long steps up winding streets, of apartment entrances and facades, make good pictorial material.  Franz Waxman’s music helps greatly to sustain the mood.  Production is ample in a yarn that doesn’t call for lavish outlay.

The city of San   Francisco, which is liberally and vividly employed as the realistic setting for the Warners’ “Dark Passage,” now at the Strand, scores the major pictorial triumph in this melodramatic tale of love which has Humphrey Bogart and his helpmeet, Lauren Bacall, as its ordinary stars. For Writer-Director Delmar Daves has very smartly and effectively used the picturesque streets of that city and its stunning panoramas from the hills to give a dramatic backdrop to his rather incredible yarn. So, even though bored by the story—which, because of its sag, you may be—you can usually enjoy the scenery, which is as good as a travelogue.

As for the over-stretched fable, it is that of a cruelly-wronged man who, escaped from San Quentin prison, is harbored and befriended by a nice girl who has a most cozy apartment on one of San Francisco’s hills. Her odd generosity towards him is because her father, too, was wrongly jailed—a not very logical reason but no less credible than other dodges in the film. At least, the reason is sufficient to triangulate the two for a slowly-developing romance amidst a man-hunt of somewhat tedious length.

The fact that Mr. Bogart gets a gun in his hand but once—and then only threateningly employs it—may be one explanation for the sag which perceptibly comes in the picture along about half-way through. The fact, too, that Mr. Daves has given his actors less action than talk and has overextended slight incidents is another obvious reason for the sag. Mr. Daves has also confused things by using a subjective camera at the start, so that it sees things as through the eyes of a fugitive, and then has switched to the conventional use later on.

This technique withholds Mr. Bogart from the audience’s observation for some time—until a fast job of plastic surgery has supposedly been performed on his face. When he finally does come before the camera, he seems uncommonly chastened and reserved, a state in which Mr. Bogart does not appear at his theatrical best. However, the mood of his performance is compensated somewhat by that of Miss Bacall, who generates quite a lot of pressure as a sharp-eyed, knows-what-she-wants girl.

Agnes Moorehead is also quite electric in a couple of scenes as a meddlesome shrew and Tom D’Andrea, Clifton Young and Houseley Stevenson are vivid in minor roles. Indeed, it is in the bizarre contacts of Mr. Bogart with shady characters such as those played by these well-directed actors that “Dark Passage” achieves tension and drive. Perhaps he should be given more time with them. No reflection upon Miss Bacall, of course.