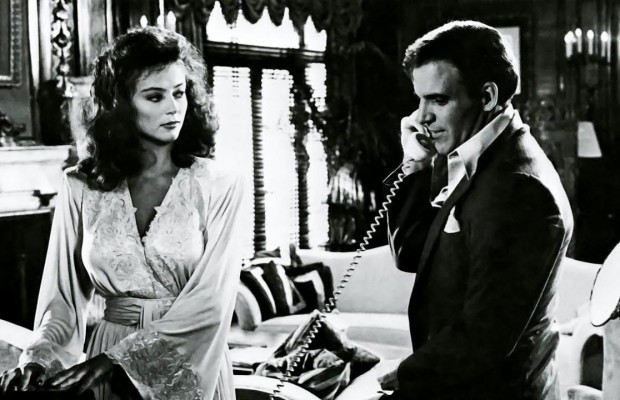 Lensed in black-and-white and outfitted with a ‘straight’ mystery score by Miklos Rozsa and authentic 1940s costumes by Edith Head, this spoof of film noir detective yarns sees Steve Martin interacting with 18 Hollywood greats by way of intercutting of clips from some 17 old pictures.

Thus, when sultry, Rachel Ward enters his seedy LA office to discuss her father’s murder, $10-per-day sleuth Martin is able to call Bogart’s Philip Marlowe for assistance on the case. And so it goes

Film is most engaging in its romantic sparring between Martin and his gorgeous client, Ward. Latter looks sensational in period garb and is not above such Martinesque gags as removing bullets from his wounds with her teeth or having her breasts ‘rearranged’ by the hardboiled detective.

The black-and-white camera pans across a not-too-convincing artist’s rendering of Los Angeles roofs at night. The rain pours down in a precise slant. The fullsomely orchestrated Miklos Rozsa soundtrack music promises mystery. Cut to the interior of a cluttered office where Rigby Reardon (Steve Martin), the quintessential 1940’s private eye, reads a newspaper whose headline announces the disappearance of a certain Dr. Forrest. Says the headline, ”Noted Scientist, Philanthropist, Was Also a Cheesemaker and Father of Three.”

Reardon immediately hears a knock on the door and there materializes, as if out of a dream, a beautiful woman, dressed by Edith Head in a large, cartwheel hat, a cocktail gown and gloves. The

”Dead Men Don’t Wear Plaid” is off and running, not only through the mystery of the disappearance of the noted scientist, philanthropist and cheesemaker, but also through a large number of favorite Hollywood films of the 40’s, including ”This Gun for Hire,” ”The Big Sleep,” ”The Postman Always Rings Twice,” and ”The Lost Weekend.”

This is no metaphorical journey. Carl Reiner, who directed ”Dead Men Don’t Wear Plaid,” and his collaborators on the screenplay, George Gipe and Mr. Martin, have concocted a technically and artistically risky, impertinent adventure that integrates clips from approximately two dozen old movies into the action of Rigby Reardon’s latest caper. Thus we have Steve Martin’s Reardon talking to an hysterical Barbara Stanwyck (”Sorry, Wrong Number”), romancing Lana Turner (”Johnny Eager”) and turning down an invitation from Bette Davis (”Deception”) for a late-night snack of toasted stale bread.

Rigby’s sometime legman is a Humphrey Bogart from ”In a Lonely Place,” ”Dark Passage” and ”The Big Sleep,” a fellow whose manners and dress are always being corrected by the fastidious Reardon.

The search for the missing Dr. Forrest also takes Reardon, disguised as a little old lady, to prison to get information from a manic James Cagney (”White Heat”), and later to a supermarket where, dressed in Miss Stanwyck’s blond wig, he picks up a lecherous Fred MacMurray (”Double Indemnity”).

”Dead Men Don’t Wear Plaid,” which opens today at the Rivoli 2 and other theaters, is a genial, gently mocking, brilliantly executed spoof that may offend the purists but which should delight the

buffs. Not the least of its achievements is that the magic of the old film clips never completely distracts attention from the comic, on-going adventures of Rigby Reardon and the beautiful woman in black, Juliet Forrest (Rachel Ward), the daughter of the missing cheesemaker.

”Dead Men Don’t Wear Plaid” is a gimmick movie, but it’s one that works with the kind of buoyant spirit of a series of very good revue sketches. With Mr. Martin as Rigby Reardon, the film has an actor who’s one of America’s best sketch artists, a man blessed with a great sense of timing, who is also self-effacing enough to meet the most cockeyed demands of the material.

Mr. Reiner, who’s also a first-rate sketch artist as well as writer and director, makes a couple of brief but very funny appearances as a rude war criminal, a character who seems to have been taken from Otto Preminger’s screen roles. Miss Ward, who made her film debut in ”Sharky’s Machine” and is as beautiful as she’s supposed to be within the film, is also an extremely attractive comedienne, particularly when called upon to remove the bullets with which Reardon is repeatedly being shot, always in the same place.

The film’s greatest achievement, though, is in the usually seamless manner by which Michael Chapman, the cameraman, Bud Molin, the editor, John DeCuir, the production designer, James J. Klinger, the supervising sound editor, and all of the other technicians have matched new material to the old.

In a couple of instances, Mr. Martin even appears in the same frame with the old stars. Mostly, however, the trick is made possible by the 40’s directors’ fondness for shooting a scene over a character’s shoulder. This allows the substitution of doubles, who keep their backs to the camera in ”Plaid,” while Mr. Martin, facing the camera, plays a scene with them.

”Dead Men Don’t Wear Plaid” is a charmer. It should also be the last word on private eye parodies for a while. The film, incidently is dedicated to the late Edith Head, whose last assignment this was.