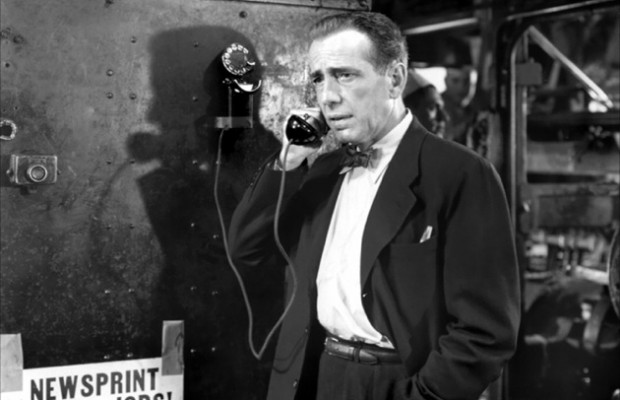 Toronto Film Society presented Deadline U.S.A. (1952) on Monday, February 19, 1990 in a double bill with While the City Sleeps as part of the Season 42 Monday Evening Film Buffs Series “B”, Programme 6.

Deadline U.S.A. is a film made late in Humphrey Bogart’s career, when what Ephraim Katz has called his “lonely, self-reliant, brooding, sardonic, skeptical and cynical image” was already well-established.  The film’s director, Richard Brooks, had written the script for the 1948 Bogart/Bacall hit Key Largo (directed by John Huston) and tailored Bogart’s role in this later film to fit his star persona.  Bogart plays Ed Hutcheson, editor of the Day, who learns that the heirs (widow and two daughters) of the late proprietor, John Garrison, plan to sell the paper to a rival who will close it down.  Permission for the transfer has to be given in court and Hutcheson determines to fight the sale by proving the paper’s value and integrity; to this end, he launches an all-out attack on the powerful, shady Thomas Rienzi.  The beating-up of one of the Day‘s reporters by Rienzi’s men and the discovery of Reinzi’s possible implication in the murder of a showgirl who had been his mistress provide ammunition.  A reporter at last brings in a witness who can testify against Rienzi, but before he can sign his statement the gangster’s thugs murder him.  Meanwhile, Mrs. Garrison (Ethel Barrymore) comes round to Hutcheson’s side and joins the fight to save the paper; in spite of this, the court rules that the sale must take place.  Hutcheson returns to his office to find that the dead girl’s mother has brought in evidence which will ensure Rienzi’s conviction.  In spite of Rienzi’s threats, Hutcheson orders the printing of the full story in his last edition. 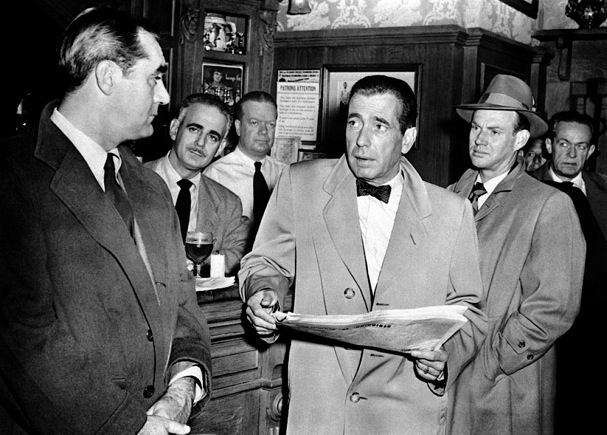 Bosley Crowther, in his contemporary review in The New York Times, felt that Deadline U.S.A. presented “a quite authentic picture of a down-to-earth newspaper shop.”  “The honest looks and dispositions of newspaper people are in this film,” he wrote, “from the gray heads of aging copyreaders to a standing skepticism toward cops.  And a sense of the newsman’s strangely guarded dedication to his work is clear and keen.”  Much of this is probably due to the fact that Richard Brooks, the film’s writer and director, began his career as a journalist and worked on the Philadelphia Record, a paper that folded as the one in the film does.  In an interview with Movie, Brooks said that “the whole point” of Deadline U.S.A. was “that newspapers that bought out other newspapers and eliminated competition were creating a situation whereby a free press was curtailed….Now Darryl Zanuck was very concerned that this was going to be called a Communist kind of a thing.  He said – “What do you mean, there is no free press?”  I said – “I’m not saying that.  I’m saying that this tendency leads in that direction.”

Kim Hunter plays Bogart’s wife in Deadline U.S.A.  She had made an auspicious screen debut in the thriller The Seventh Victim (1943) and then worked with Michael Powell in A Canterbury Tale (1944) and A Matter of Life and Death (1946).  Returning from England in 1947, she starred on Broadway as Stella Kowalski in “A Streetcar Named Desire” and won an Academy Award when she repeated the role in the 1951 film version.  Deadline U.S.A. was her first film after this triumph.  After only one more (Anything Can Happen (1952)) her name appeared in Red Channels, the Red-scare pamphlet, and she was blacklisted by the industry for several years.  Her screen career was permanently damaged, though she did reappear in several “Planet of the Apes” movies in the late 1960’s.