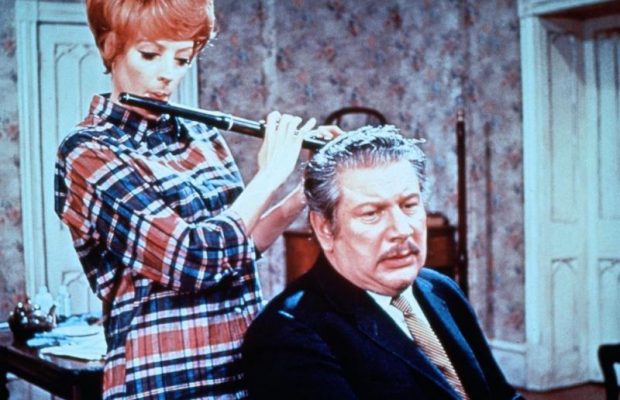 Director Eric Till was born in London, England on November 24th, 1929.  He occasionally ventured into American productions, but most of his work had been for Canadian TV, for which he received two Genie and four Gemini Award nominations over the years.

As well, in a sense, he launched interviewer Brian Linehan’s career, when Linehan was asked to fill in for award-winning newspaper columnist Ron Haggart to interview Till who in 1972 was promoting his new film A Fan’s Notes when Haggart didn’t show up for the scheduled interview.

Hot Millions was written by Ira Wallach and Peter Ustinov.  Ustinov was prolific in the film world.  Besides acting in just over 100 roles in film and TV, he also directed, produced and wrote.  He was born as Alexander Freiherr von Ustinov on April 16, 1921 in Swiss Cottage, London to Nadezhda Leontievna Benois and Iona von Ustinov. His father was of one quarter Polish Jewish, one half Russian, one eighth African Ethiopian, and one eighth German descent, while his mother was of one half Russian, one quarter Italian, one eighth French, and one eighth German ancestry.  Ustinov had ancestral connections to Russian nobility, as well as to the Ethiopian Royal Family.   As well as English, he was fluent in Russian, French, Italian and German.

His wonderful sense of humour, droll or otherwise, comes through in a number of his roles such as the 1951 Hotel Sahara and the 1955 We’re No Angels where he acted alongside Humphrey Bogart and Aldo Ray.  As well as acting in, he also directed 1962s Billy Budd, the film that brought world acclaim to actor Terence Stamp in a heartbreaking role.

And I’ll end with a humorous film quote which I’ll attribute to Ustinov: “When the time comes,” boasts successful American tycoon Karl Malden, “I might even put in a bid for all of England.”  “Aren’t you going to wait till it’s solvent?” quips Peter Ustinov.

Hot Millions is a comedy directed by Eric Till in 1968.  It stars Peter Ustinov and Maggie Smith with a fine supporting cast including Bob Newhart, Karl Malden, Cesar Romero and Robert Morley.  It was nominated for an Academy Award for Best Writing, Story and Screenplay and a Writers Guild of America nomination for Best Written American Comedy.

Ustinov is a con artist who assumes the identity of a computer programmer in an insurance business and begins to send himself cheques under various aliases.  Made in 1968, it deals with computer crime.  In light of today’s prevalence of cybercrime, it could very well be viewed as a cautionary tale.

Director Eric Till was born in England but his career has been spent in Canada, the US and the United Kingdom.  Most of his working career has been in Canada since emigrating in 1954.  His early directorial work in Canada included the iconic television series The Forest Rangers (1963-1965).  It starred a young Gordon Pinsent as Sergeant Scott of the RCMP.

He directed a number of films for cinematic release but the majority of his work has been in television movies, miniseries and episodic programs.  His television work also includes directing performances of the National Ballet of Canada, the Bolshoi Ballet and the Royal Winnipeg Ballet, as well as the final concert of the famous conductor Sir Thomas Beecham.  His awards include the Governor General’s Performing Arts Award for Lifetime Artistic Achievement and the Directors Guild of Canada Lifetime Achievement Award.