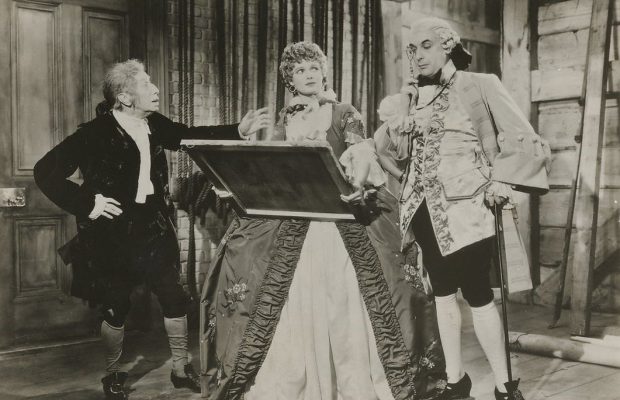 Set in the 18th century, the film tells of the relationship between Peg Woffington and David Garrick, legendary stage performers.  The film opens with Neagle, as Peg, leaving her home in Dublin to follow her love, Hawkins, to England, where he is trying to become an actor.  However, there is disappointment on her arrival as she fins Hawkins has fallen under the spell of a “big city” woman, and other than physically bears little resemblance to the man she came to find.  Ever the determined woman, Peg set about to make it on her own in the theatre, and batters down the seemingly impregnable walls (and ever-present final line of defence, the stage door security  man, to meet with, then fall in love with, Garrick.  A little help from some “furry friends” goes a long way as well.

Peg soon has established herself both on stage at the Drury Lane Theatre, and alongside Garrick as well.  The “final curtain” for Peg, and the film, is in true theatrical style, and in keeping with the tradition of the reviewer, we decline to give it away here and now.

The film deviates somewhat from reality (as biographical films have been known to do now and then…more now than then), since Peg’s true-life demise was three years later than portrayed in this production.  The performances of Neagle and Hardwick, especially Sir Cedric’s on-stage moments, carry the film well above the average level.  Comedic touches help a lot as well, and I doubt there will be a few who will ask for copies of Peg’s “Irish Stew” recipe after the theatre lights come up.

Much of the power of the film comes from the screenplay by Miles Malleson, well-known as an excellent, versatile onscreen performer.  This was his first  screen-writing assignment. 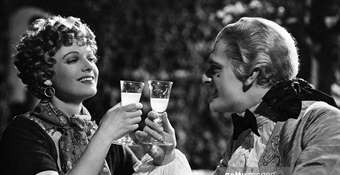 Dame Anna Neagle was born Marjorie Robertson in Forest Gate, London in 1904.  She studied dancing as a child and worked as a dance instructor, then as a chorus girl.  In 1925 she made her stage debut, and in 1929 her Broadway debut in “Wake Up and Dream”.  The year 1931 brought her the lead role in “Stand Up and Sing” and her movie debut in Should a Doctor Tell?.  Her first collaboration was Director Herbert Wilcox was in the same year Goodnight, Vienna.  She married Wilcox in 1943.  He died in 1977.  The years 1933-34 saw her elevated to star status with performance in Better Sweet, and Nell Gwynn.  There followed a series of starring roles in films during the 1930’s and 1940’s.  In the late 1950’s, she formed her own production company.  By 1960, she was back on stage in “The More the Merrier”.  Her stage career continued through the 1970’s in plays such as “No, No, Nannette” (1973).  Torontonians were able to see her in a late 1970’s production of “My Fair Lady”.  In 1969, the British film industry paid tribute to her, after she became the first film actress to be created a Dame of the British Empire.  The occasion was unique, as the more than 350 guests were invited to the Dorchester Hotel in London for a “name your own price” meal, which showed a profit of $12,000, which was donated to film charities.  One man paid $3,600 for his lunch, and a dresser, a secretary and the stage doorkeeper at the Adelphi Theatre sent $12 between them as a goodwill gesture.

She was one of the first of the home-grown British film stars who did not have an established stage reputation.  Her career was shrewdly and single-mindedly promoted by Wilcox, her husband.  Writer Jeffrey Richards in The Age of the Dream Palace, opines that there were only three major stars created by the British cinema in the 1930’s…Robert Donat, Madeleine Carroll and Anna Neagle.  She died in June of 1986, at the age of 81.

Sir Cedric Hardwicke was born in Lye, Stourbridge, Worcestershire in 1893.  His education included the Royal Academy of Dramatic Art in London.  The history of Sir Cedric before the public begins in 1912 when he made his professional stage debut.  His history in silent film is very brief…a 1913 short subject entitled Riches and Rogues and Nelson in 1926, where he played the title role of Horatio Nelson.  He was again in the spotlight as an historical figure in his first sound film performance in Dreyfuss (1931).  In the era from the mid-teens into the 30’s, he was busy with the Old Vic Company in London, served as a Captain in the British Army in the First World War, and, back on stage was creating several roles in plays by George Bernard Shaw.  His American stage debut came in 1936 in “Promise”.  In 1945 he directed a stage version of “Pygmalian” in New York.  He was busy through the intervening years, touring the USA and England with “Don Juan in Hell” in 1952.  His great voice rumbled  through the radio speakers in the early 1950’s as he starred in the “Bulldog Drummond” series and then in the “Gertrude Berg” show in the early 1960’s.  By the time he began to appear regularly in films, Cedric Hardwicke had already written the first of his two autobiographies and (in 1934) had been knighted for his theatrical work.  So, while he always performed well in movies, and later, television, his movie career was largely a tangent to his work on stage.  He himself wrote: “I believe that God felt sorry for actors, so He created Hollywood to give them a place in the sun and a swimming pool.  The price they had to pay was to surrender their talent.”

Sir Cedric Hardwicke died of emphysema in New York City in 1964.  His final film appearance was that same year in The Pumpkin Eater.