Toronto Film Society presented Queen of Hearts (1936) on Monday, January 25, 1988 in a double bill with I See Ice! as part of the Season 40 Monday Evening Film Buffs Series “B”, Programme 4.

Tonight, “Our Gracie”, as she as known to millions, is back to entertain in what could be termed a British version of the Hollywood “backstage musical”.  She plays a seamstress who works opposite a theatre, where her idol Derek Cooper (John Loder) is appearing.  It’s Gracie to the rescue, as she saves him from the consequences of a drunk driving charge, being mistaken for the wealthy woman backing the show…  as long as she gets the leading part.  In true show-biz style she take it on–and should the result be any surprise?

The film was the first of Gracie’s to be directed by Monty Banks, who was to become her second husband.  Banks, Italian-born and American-educated, was himself a knockabout comedian and prolific director of low-budget British comedies.  He directed the first two George Formby films for producer Basil Dean, No Limit and Keep Your Seats Please.  Banks’ background of zest, invention and humour is very evident in Queen of Hearts.  The general comedy stream and extended slapstick sequences are a Banks trademark.

Also, the film provides a deliberate glamourization of Gracie.  In the early Sally In the Alley, glamourization had been seen as an upper-class attempt to subvert her working-class naturalness and had been mocked.  Her earlier films had pictured her as anything but glamourous.  But, in a Cinderella-like way, tonight’s film shows her transformation from humble seamstress to glittering stage star. 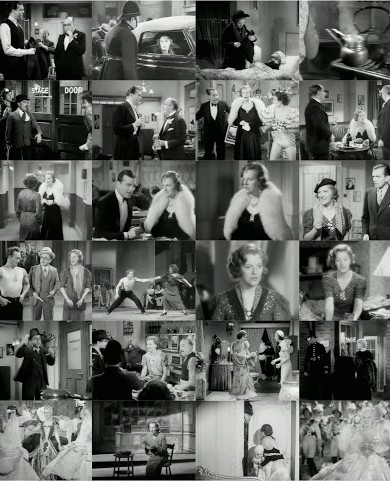 Gracie Fields was born in Lancashire in 1898.  She took to the stage as a child as a singer, and continued with various juvenile troupes.  In 1915, she began appearances in British music halls and musical productions.  Her first screen appearance was in Sally In the Alley in 1931.  Last season, one of her earlier films Look Up and Laugh (1935) was part of one of the best received programmes of our season (with Forby’s Turned Out Nice Again).  Fields became a national symbol, and to the British in the 1930s, she was simply “Our Gracie”.  The highest-paid film star in the country… ships were named after, she was honoured with a CBE in 1938, the first female variety artiste to receive the decoration, and in 1979, shortly before her death, she became a Dame of the British Empire.

John Loder had been teamed before with Gracie.  In Love, Life and Laughter (1934), he was the runaway Prince Charles Adolphus of Granau, and in Sing As We Go he played Hugh Phillips, the mill-owner’s son.  Loder was a matinee idol of the female set, who had first come to attention in Alexander Korda’s 1933 production of The Private Life of Henry VIII.

Director Monty Banks was born Mario Bianchi in Italy in 1897.  He was the son of a composer and band-leader, and came to the U.S. in 1914 to appear o the New York stage as a comic dancer.  He headed west to Hollywood, appearing in minor roles in “Fatty” Arbuckle comedies as well as in principal comic roles in silent two-reelers, some of which he directed himself.  He went to England in 1928, where he became a director, but in Hitchcock-style played bit parts in his own films.  He returned to the U.S. in 1940, directing just one film, Laurel and Hardy’s Great Guns (1941), one of the lesser Laurel and Hardy features.  He became Gracie’s husband, and died in 1950.