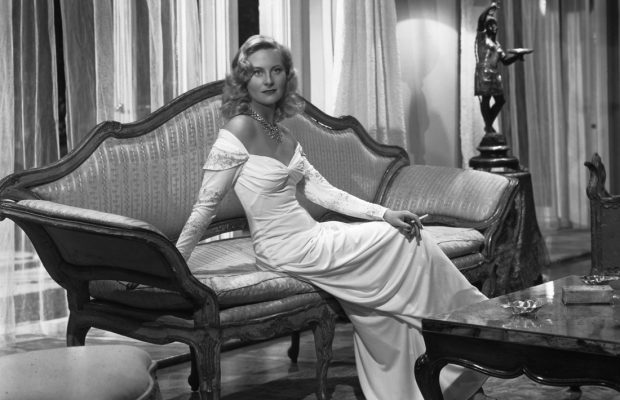 Toronto Film Society presented The Chase (1946) on Monday, August 19, 2019 in a double bill with Tension as part of the Season 72 Summer Series, Programme 6.

Toronto Film Society presented The Chase (1946) on Monday, October 4, 2004 in a double bill with Night Has a Thousand Eyes as part of the Season 57 Monday Buffs Series, Programme 1. 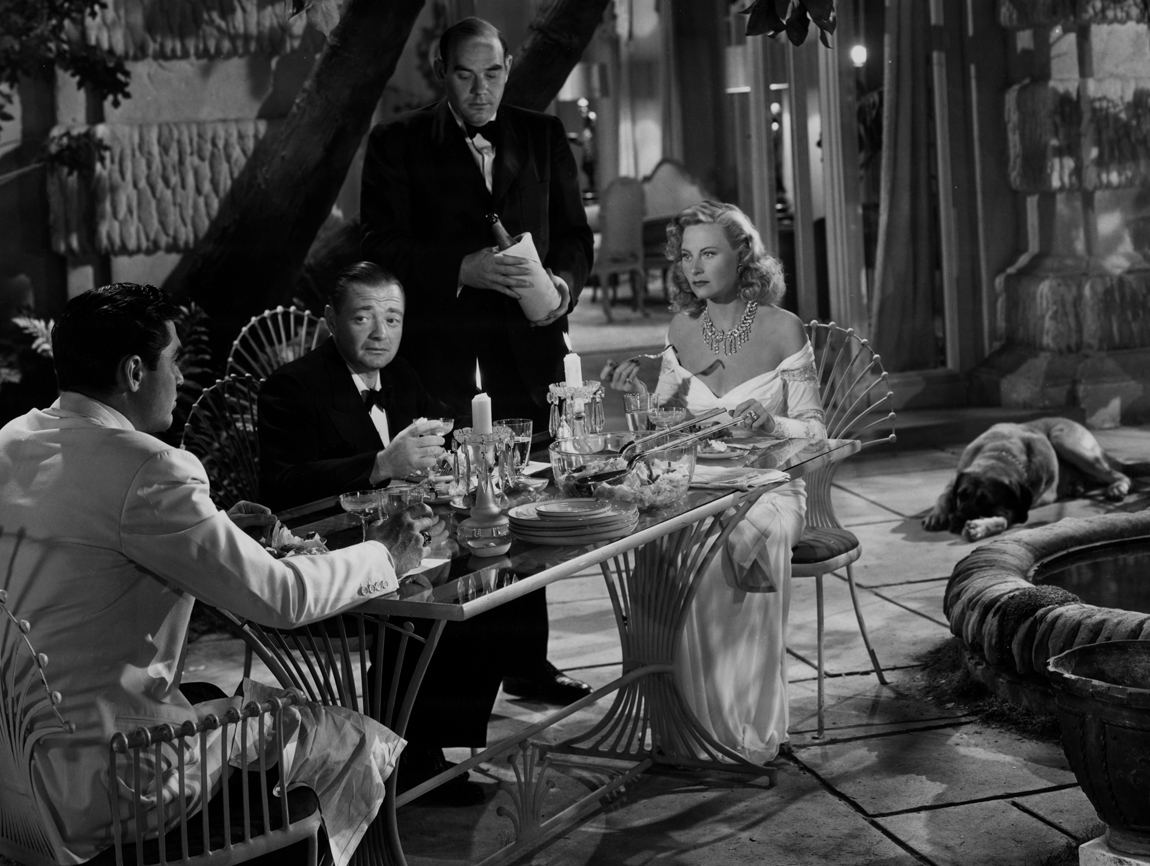 After watching The Chase a couple of years ago, I’ve thought about this film from time to time.  A noir directed by Arthur Ripley, it’s based on a book by Cornell Woolrich whose novels were the basis for such films as  The Leopard Man (1943), Deadline at Dawn (1946), Black Angel (1946), Fear in the Night (1947) and next week’s Phantom Lady (1944).  The cast includes a rather interesting choice of actors: Robert Cummings, Michèle Morgan, Steve Cochran, Jack Holt and Peter Lorre.

The screenplay is written by the talented and unusual Philip Yordan who grasped the frenzy of and did justice to Woolrich’s novel.  Director Arthur Ripley, another interesting choice, started out as an apprentice with Kalem Pictures, became a gag writer for Mack Sennett, then, along with Frank Capra, was assigned as the writer to comedian Harry Langdon.

The Chase is the story of two men whose lives become intertwined when one is hired by the other as his chauffeur.  Eddie Roman, played by Steve Cochran, is a bad man.  Gino, played by Peter Lorre, is his positively weirder and possibly scarier henchman.

Just out of the army, Chuck Scott, played by Robert Cummings, a soldier suffering from Anxiety Neurosis, or our present-day terminology of Post Traumatic Stress Disorder, is hired as chauffeur.  A chaotic move for Roman, an unpleasant and chaotic man himself, without knowing what he just got himself into.

Michèle Morgan plays Roman’s beautiful wife Lorna, or hostage, who needs someone to rescue her.  She’s not fussy.  If it takes a man, even one who suffers from Anxiety Disorder, so be it.  And what makes Robert Cummings such a perfect choice for the role in my mind is with regards to reading the book Dr. Feelgood: The Shocking Story of the Doctor Who May Have Changed History by Treating and Drugging JFK, Marilyn, Elvis, and Other Prominent Figures by Richard A. Lertzman and William J. Birnes.

Robert Cummings, who was widely known as a health food advocate—in 1960 he wrote the book How to Stay Young and Vital—became addicted to Dr. Max Jacobson’s “health drug cocktail”.  The cocktail’s main ingredient was speed and although Cummings was not involved with this deadly drug when making The Chase, as he didn’t start taking it until the early 1960s, the image of what became of him haunted me.  He died on December 2nd, 1990, his body, along with the effects of Parkinson’s, was ravaged by his addiction to methamphetamines.

Jack Holt, who had been acting in film since 1914, plays Doc Davidson, a Commander in WWII and the man who connects the dots for the hero of our story, Chuck Scott.

I first became aware of Michèle Morgan in the wonderful 1937 French film Gribouille [Heart of Paris] which TFS screened at Eastman Museum.  It was remade in 1940 as The Lady in Question with Rita Hayworth in the same role, yet it had none of the nuance or believability of the original.  I found it as dull as I found the former engaging.  But since being aware of Morgan, I realized I had seen her in a couple of Hollywood films such as 1943’s Higher and Higher where Frank Sinatra plays a character named Frank Sinatra and the 1948 British film The Fallen Idol which she made just after tonight’s movie.

The film is filled with psychological craziness.  One of Chuck’s first lessons is the true meaning of a back-seat driver.  You will love this scene.  My question is, when Gino is in the driver’s seat, why can’t he control the direction of the car?  Or is it the fact that no matter what, Roman has complete control over Gino’s psyche?  Another mental mess.

When Chuck is acutely suffering from Anxiety Neurosis, suffer he does through all sorts of scenarios, even ones that he has no privy to.  Logical and yet never ending, they go from bad to worse.  And what makes this film most thought-provoking is the ending.  Unless our hero is clairvoyant, I believe he has hallucinated the film’s final scene.  It happens in the same place with the same characters in the same way with the same dialogue as when we saw it the first time ‘round.  Or, is this Hollywood’s idea of a happy ending?

Regardless, whether I’m correct or not in the way I remember things, I hope you all enjoy tonight’s first film.

This is an intriguing little film noir, filmed and set in the immediate post-war era. The casting is interesting, although Bob would not likely be many people’s favourite actor for the role of Chuck Scott. Part of the problem was that Cummings’ acting style was dated, being that of the perpetually smiling, earnest, juvenile lead of the early-1930s; a tiresome character, indeed. One kept expecting him to say, “Gee, that’s swell” every five minutes. He also had a patently insincere manner, which didn’t help his performances. Michele Morgan was sort of a French Marlene Dietrich when it came to playing cynical, world-weary women with a heavy-lidded insouciance. Her first major American role was the tragic heroine in 1942’s Joan of Paris, helping as a group of Allied flyers escaped from occupied Paris. Miss Morgan left the U.S.A. soon after this film, appearing as Ralph Richardson’s mistress in The Fallen Idol, then ultimately returning to France. Steve Cochran was ideally cast as the gangster. In common with Ted de Corsia, Charles McGraw, and Lawrence Tierney, among others, he seemed born for such parts. With his glowering, sullen manner, ready to explode unexpectedly, Cochran projected menace on a grand scale. During 1946, he also appeared in the classic The Best Years of Our Lives, as Virginia Mayo’s lover while husband Dana Andrews was smitten with comely Teresa Wright. The performer in The Chase who had the longest career was Peter Lorre (real name: Laszlo Lowenstein), extending from the late-1920s to the 1960s. He is best remembered for playing the child killer in the German movie M, and as gangster Joel Cairo in The Maltese Falcon. Lorre was an excellent actor, but also an outrageous ham and scene stealer. By the mid-’40s, his energy level seemed to decrease as his weight increased, and he, too, resorted to the world-weary persona, often as a gangster or some other dubious character; usually with a cigarette dangling constantly from his mouth.

Cornell Woolrich (who also wrote under the pseudonym of William Irish) was a very successful mystery writer. Many of his stories became films, the best-known adaptation being that of Hitchcock’s Rear Window, in 1954. He began his career, as did so many mystery writers, by creating short stories for the so-called “pulp magazines” of the ’30s and ’40s. Woolrich later graduated to full-length novels. He enjoyed great success, but seems to have been an eccentric, acutely unhappy man with a fondness for the bottle; an occupational hazard, it seems, for many writers.